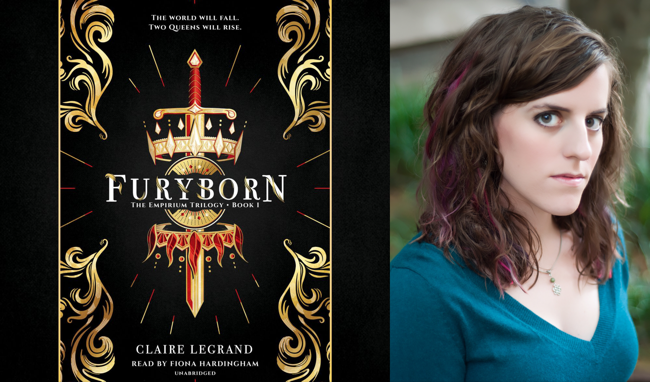 I haven’t read a good young adult fantasy novel in ages, except for Tomi Adeyemi’s Children of Blood and Bone, but then I read (and loved) Claire Legrand’s Sawkill Girls and knew that the next logical choice had to be her epic fantasy Empirium series. Furyborn, the first in the series, is everything that young adult fantasy stopped being ages ago. Too often, young adult fantasies feature rushed and weak storylines, with authors drawing out plots so that they can turn a single story into a trilogy. More often than not, those plots focus on love interests and the ever-present love triangle, rather than exploring the magical worlds that the authors work so hard to create.

Furyborn is different. Claire Legrand writes powerful, complex female characters and Furyborn features two strong protagonists. Rielle Dardenne has grown up with her best friend Prince Audric and his betrothed Lady Ludivine. When Audric is the target of an assassination attempt, Rielle rushes to his defence and exposes to the world her unique and formidable magical powers. Such power can only mean one of two things, that she is a prophesied queen of great good or of great evil. To prove her worth and save her life, Rielle is forced to undergo a series of trials that may yet kill her in the meantime.

One thousand years later, Eliana Ferracora is a bounty hunter, working on behalf of the Empire to eradicate the rebel Red Crown. Her life is changed forever when her mother is abducted and the mysterious figure The Wolf convinces her to join him in looking for her.

Told in alternating chapters as we switch between the stories of Rielle and Eliana, Furyborn kept me up for far too many nights as I devoured just one more chapter. The story begins at the end of Rielle’s story, only to take readers back to the very beginning, ever conscious of the tragedy that awaits. When we meet Eliana, she is at the start of her story, with no idea of what awaits her. Despite thinking you might know everything, Legrand takes the reader on an explosive journey as you slowly start to unravel what really happened.

At over 500 pages, Furyborn is an epic tome yet I was surprised at how captivating and uncomplicated it was for such a lengthy fantasy novel. I really appreciate this – fantasy novels are often far too complicated for their own good and keeping notes to keep up with a novel is not my idea of fun.

Despite this, I was nevertheless pleased to have listened to this on Audible. Fiona Hardingham does a fantastic job of bringing this story alive and her voices for each of the characters was superb, especially the creepy Corien. I'm really enjoying listening to audiobooks lately but I'd especially recommend them if you're struggling with a lengthy or complex novel.

Ultimately, Furyborn is fascinating, fun and intriguing. I wouldn't go so far as saying it ends on a cliffhanger but the story is far from resolved and I'm pleased to arrive late to the Empirium party because sequel Kingsbane is already released and next on my to-listen pile.

I give Furyborn an excellent four out of five stars and recommend to kindred seekers of superior young adult fantasy fiction.