Two teenagers in a car, discussing their shared past and a future that only one of them will get to see. They don’t know it yet but tonight everything will change when they are pulled over by a policeman and one of them is killed. This is the premise of Angie Thomas’s astonishing debut The Hate U Give which comes to the big screen this week care of 20th Century Fox.

Having read the novel and given it a five star review, I knew that the film wasn’t going to be easy to watch but was nevertheless unprepared for the emotional onslaught. This is a powerful film with superb performances and a damning indictment on poverty, underprivileged communities and drug culture.

Amandla Stenberg (The Hunger Games) plays Starr Carter, a young girl whose life is turned upside down when she witnesses the murder of her childhood friend Khalil (Algee Smith). It was interesting to see the portrayal of how Starr handles her two separate identities as a privileged student in a mostly white prep school and a Jordan-obsessed teen in a poor, mostly black neighbourhood. Director George Tillman Jr is already seeing wins and nominations for awards but I predict that Stenberg will soon see Best Actress nominations because she gave an Oscar-worthy performance.

Stenberg was supported by a strong cast, most notably Regina Hall and Russell Hornsby (Grimm) who played her parents Lisa and Maverick Carter. Lamar Johnson gave a standout performance as Starr’s half-brother Seven and I was delighted to see KJ Apa (Archie, Riverdale) in his role as Starr’s boyfriend Chris. 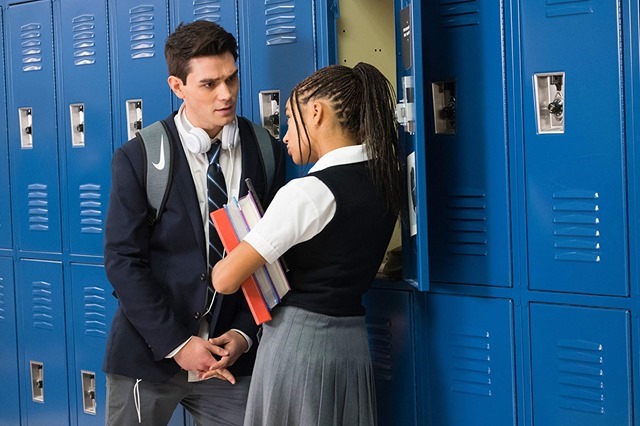 There was so much in the novel relating to the lives and personalities of the people around Starr and in the end, it was impossible that the film could have tackled all of that material. Nevertheless, the plot in the film doesn’t deviate too much from the book, except at the very end. One of the surprising aspects of Angie Thomas’s novel was how abruptly it ended and I can imagine that this wouldn’t have translated well to film. To this end, there is a scene featuring Starr’s brother Sekani (played by TJ Wright) which wasn’t in the book and there is an epilogue of sorts which was also new to the film. Ultimately, I think these deviations were necessary and helped the film in its resolution of the main themes.

The Hate U Give maintains the tone of Angie Thomas’s book and I am thrilled that it was brought to film by such a talented cast and crew. It is a challenging and difficult film and one that has remained in the forefront of my mind for days after viewing. One scene which stands out to me was where Starr’s uncle Carlos (Common) tries to explain what goes through the mind of a policeman during a traffic stop and the anxiety, fears and thoughts that go through their minds as they try to interpret the actions of those in the car. I appreciated the attempt to tell both sides of the story and as Algee Smith said in his interview with blackamericaweb.com, it is a real fear but “unfortunately when you’re Black, it’s just a bigger fear”.

I give The Hate U Give a superb five out of five stars and, like the book, recommend that absolutely everybody watch it.