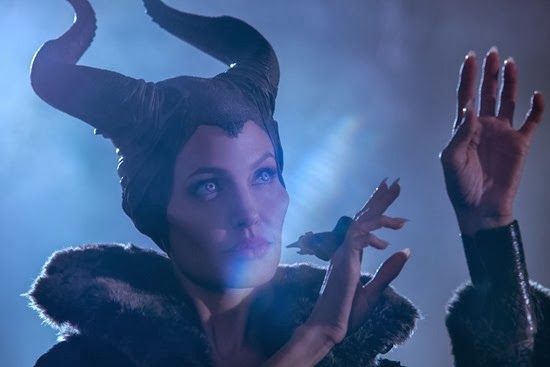 I can’t believe it has been over 18 months since I brought the first look of Angelina Jolie as Maleficent. Well, actually, I can. This film has been really long in the making but thankfully it’s finally arriving in the UK and USA on 30 May 2014.

So what do you think? I think Angelina Jolie looks really terrifying and I have high hopes for this film. I’m hoping it will be an eerie take on the original fairy tale without being as disappointing as Hansel & Gretel: Witch Hunters and Snow White and the Huntsman.

Of course, this is a Disney film so perhaps I shouldn’t be too eager. On the one hand it might not be as scary as it looks (see the exceptionally cute image of Elle Fanning as Princess Aurora above) but on the other hand, they’ll have a huge budget behind it.

The brand new trailer released today features Lana Del Rey’s creepy rendition of of “Once Upon a Dream”. The track is available free of charge until 3 February from Google Play.

Maleficent explores the untold story of Disney’s most iconic villain from the classic “Sleeping Beauty" and the elements of her betrayal that ultimately turn her pure heart to stone. Driven by revenge and a fierce desire to protect the moors over which she presides, Maleficent cruelly places an irrevocable curse upon the human king’s newborn infant Aurora. As the child grows, Aurora is caught in the middle of the seething conflict between the forest kingdom she has grown to love and the human kingdom that holds her legacy. Maleficent realizes that Aurora may hold the key to peace in the land and is forced to take drastic actions that will change both worlds forever.