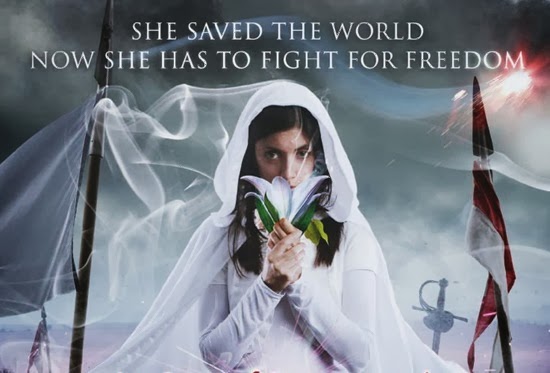 Avry of Kazan is a healer in the Fifteen Realms, a land torn apart by a deadly plague.  Healers were once reviled, accused of standing by and doing nothing to stop the devastation of the plague. Now war ravages across the land while the megalomaniac King Tohon leads an undead army in his quest to be sole ruler over all the realms.

Scent of Magic is the second novel in Maria V. Snyder's Avry of Kazan trilogy. The events of debut Touch of Power closed with Avry's close brush with death and in Scent of Magic, Avry and lover Kerrick decide to take advantage of the prevailing belief that Avry succumbed to the plague. They decide to split up with Avry heading south to infiltrate the holy army of Estrid and continue on her quest to reconcile with her sister.  Meanwhile,  Kerrick returns to his realm of Alga in the hopes of mobilising his army to join the fight against King Tohon.

Can they succeed in time to stop Tohon’s evil plan and restore order and unity to the Fifteen Realms?

The Avry of Kazan series is based on such a fantastic premise and no one writes this type of fantasy better than Maria V. Snyder. The problem is that like so many of her other series, this one seems to be suffering from a doomed mid-trilogy story. 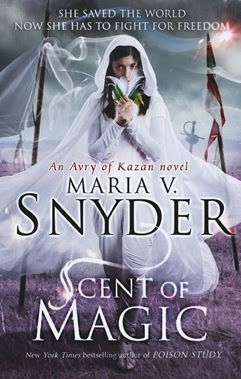 I wanted to love Scent of Magic, I really did.  I thoroughly enjoyed Touch of Power and gave it a 5 star review. Indeed, I had waited with bated breath for Snyder to release the sequel but I admit that I was disappointed. I’m keen to read the final book in the series though so I am going to list the five issues I had with Scent of Magic which ultimately ruined the novel for me and I’ll leave the reader to make up their own minds.

I read a lot of series and I’d say the bulk of them are trilogies. There is always going to be a fair amount of info-dumping as the author tries to remind readers of the events of the previous novels and perhaps even snag a few new readers. The problem here is that there is a massive amount of info-dumping in the form of awkward conversations and a fair amount of telling the story instead of allowing it to tell itself.

The next three points all have to do with how much Avry’s character and how her circumstances changed between the first and second novels. I wouldn’t exactly call it character development but rather pretty convenient shortcuts the author took to tell the story.

The entire story in Touch of Power hinged on the fact that healers were outlaws and were subject to imprisonment and execution. Scent of Magic is set in an unspecified medieval time, without the marvels of modern communication. Even if Avry was vindicated at the end of the previous novel, there is no mention of that suspicion, fear and hostility towards healers in this novel.

After spending a relatively short period with Kerrick and his men in the previous novel, we are now to believe that a trained healer has now become a master tactician and is able to teach an entire army about guerrilla warfare and slipping through forests undetected.

In many ways, Avry is just a different person. Gone is her confidence and competence that saved her life so many times in the past. In Scent of Magic, Avry is an unreliable narrator and so much of the story revolves around her frankly paranoid impressions of who does and doesn't like her and the errors in judgement she makes about other characters. Those mistakes would have gotten her killed in the previous book and almost do in this one.

My final qualm has to do with creative liberties and the suspension of disbelief. The Avry of Kazan series is a fantasy series and like all fantasy series, the author is going to take a fair amount of liberties and the audience is going to have to take a leap of the imagination. My problem is that the entire resolution of this book depends on a syringe, a 19th-century invention that is absolutely out of place in this medieval type society.

So there you have it, repetition, incongruous characterisation and inconsistencies, an unreliable narrator and modern inventions in a medieval world all served to undermine Scent of Magic and make it a disappointing read. I am really hoping that Taste of Darkness will be an improvement in the way that Fire Study was but I won’t hold my breath.

You can buy Scent of Magic at Amazon.co.uk or Amazon.com. This review contain affiliate links.