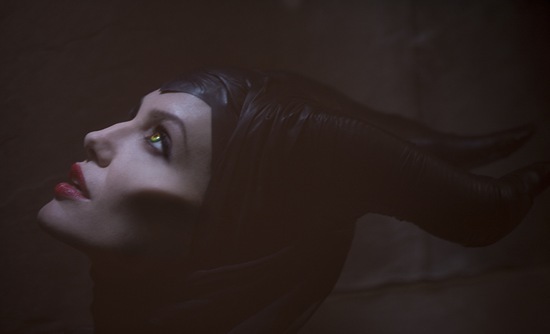 Imagine if we knew the real story behind Sleeping Beauty?  Not the nice story, but the story as told from the point of view of Maleficent, the princess’s evil nemesis.

In 2014, The Walt Disney Studios will bring you Maleficent and they have released this first image of Angelina Jolie as the woman whose heart was so black that she cursed the baby Aurora.

This is a massive release and Disney have recruited some big names to take part in the film.  Two-time Oscar®-winning production designer Robert Stromberg makes his directorial debut, while Joe Roth produces and veteran Disney writer Linda Woolverton (The Lion King, Beauty and the Beast) wrote the screenplay.  Angelina Jolie is an executive producer alongside  Don Hahn, Matt Smith and Palak Patel.

That’s not the most impressive part though.  Jolie will be joined onscreen by an all-star cast including Elle Fanning as Princess Aurora and supported by Sharlto Copley (District 9, The A-Team), Sam Riley (On the Road), Imelda Staunton (Vera Drake), Miranda Richardson (The Hours), Juno Temple (Atonement) and Lesley Manville (Secrets & Lies).

This could be a lot of fun.  I wonder if Disney can pull off something as dark and delicious as this looks while still remaining family friendly?  I guess we’ll have to wait another two years to see.