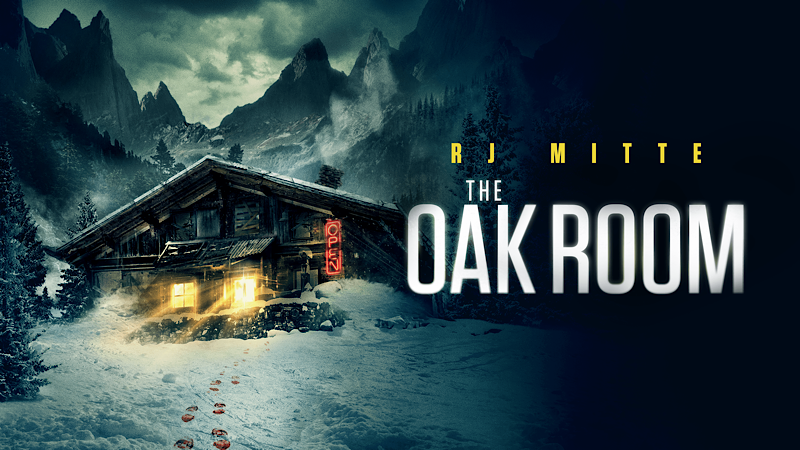 It's takes a lot to render me speechless but director Cody Calahan's The Oak Room is a very clever horror film that had my mind reeling for ages afterwards as I tried to piece the plot together in my mind. It's a story within a story within a story, reminiscent of Italo Calvino's If on a Winter's Night a Traveller, this time with an actual plot. The Oak Room starring Breaking Bad alumnus RJ Mitte is a slow-burn horror with an absolute killer of a reveal and I predict that it will be one of my favourite horror films of 2021.

A drifter walks into a bar moments before closing time. He's not exactly welcome and he owes the bar-owner a great debt. Keeper of secrets and confidant Paul (Peter Outerbridge, Saw VI) does what any good bar-owner would do and snitches on the drifter to some very nasty people. Far from phased, the Steve (RJ Mitte) offers to tell him a story which he promises will release him from his debt. Intrigued, Paul agrees to listen while he finishes off the closing up.

As Steve says, ‘a story is worth a thousand words’ and he begins to weave a tale about another bar, The Oak Room, and a very convoluted tale involving another drifter, another bar man and a case of mistaken identity.

Of course, that is all I can divulge because The Oak Room is a film that must not be spoiled.

Set in two bars in the depth of a Canadian snowstorm, The Oak Room is surprisingly bright with rich, lurid colours from the neon lights of the bar paraphernalia. The oversaturated colours and snowy conditions lend the film a claustrophobic feel and add to the creeping sense of impending doom as the film reaches it’s climax.

That breathless, heart stuttering feeling is definitely helped along by Steph Copeland’s soundtrack of eerie strings, sinister bass and devastating lyrics. If you loved The Oak Room soundtrack, check out the Soundcloud widget below.

Anyone who ever watched Breaking Bad will know that RJ Mitte can act but he was excellent in this film. He has the most expressive eyes, perfect for the capricious Steve and his tale of woe. Likewise, Peter Outerbridge was great in his role as Paul, a man whose fortunes are certainly altered throughout the night. Ari Millen (Orphan Black) and Martin Roach round of a fine cast who keep the audience guessing right up to the end.

The colours, the music, the atmosphere and plot, I liked this film a lot.

The Oak Room is the kind of film where you're best going in with as little information as possible and proves yet again why we need to support independent film. I give The Oak Room an excellent five out of five stars. Cody Calahan (Let Her Out) has created a very clever yet subtle horror film and I look forward to discovering what he does next.
★★★★★