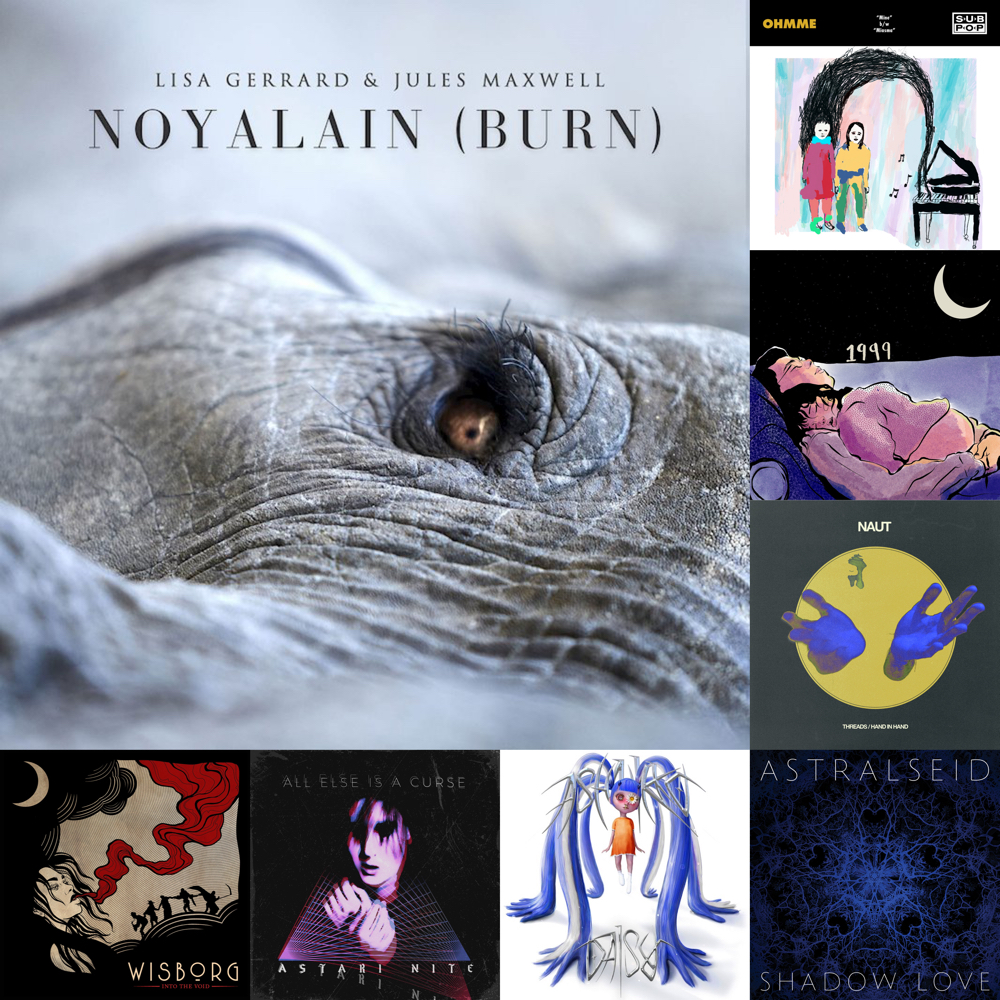 I didn't listen to as much new music as I'd wanted to in February. Snow and icy weather had me hibernating, hiding away from the world and when I do that, I just listen to old favourites. It's still ridiculously cold and dreary in March but suddenly this is perfect weather for discovering new stuff and I've returned to my roots listening to goth, industrial and indie, with a little folk and afropunk thrown in.

This is my single of the month and might well be my favourite track of 2021. I love Lisa Gerrard and once famously played "Sanvean" on repeat for six months. I also adore Dead Can Dance. This track? It's so good that I think it easily charts in my top ten favourite Gerrard / DCD tracks of all time.

Jules Maxwell is no stranger to Dead Can Dance fans. He is the currently keyboard player for the band and is a songwriter and composer. "Noyalain (Burn)" is the first track of the album Burn which will be released on 7 May 2021. Post-Punk reports that seven short films will accompany the seven tracks on the album and that "Noyalain" is an invitation to walk in peace.

Back in the days when I lived in Doc Martens and had a spider web shaved into my undercut, I lived at Alcatraz, a goth, punk, industrial club in Johannesburg. I learned about Wisborg on the I Remember Club Alcatraz Facebook group. I love "I Believe in Nothing" and "Oblivion" from their upcoming album Into the Void which is out today 19 March 2021.

I love the drama of this track. It would be incredible to dance to on a packed dance floor.

I bet many female artists rue the day Kate Bush ever opened her mouth because so many of them get compared to her. In the case of Anna Wolf, it's impossible not to make that comparison but "Gong" is much more than that. This powerful track is begging to be played at full tilt and I've gone from not knowing Wolf to being a fan in the space of a song.

Now if only she could release a full length album!

"All Else is a Curse" by Astari Nite

Astari Nite found me on Instagram after I showered some love on Wisborg and I'm glad they did. Their music reminds me a lot of The Cure or Sisters of Mercy but it's Mychael Ghost's Bowie-esque vocals that give this band their distinctive sound. This track is a definite keeper and I'm looking forward to more of their stuff.

"Afraid" is the second track from Mackenzie's upcoming album Rejection Letter and it's pretty devastating. It's about being afraid, something which Mackenzie notes is "especially relevant now" and it genuinely feels like she's speaking to my soul.

Can I be afraid
And still be free?
I am afraid
What will become of me?

This track is absolutely not safe for work. Ashnikko reminds me a lot of Die Antwoord and I like this goddess manifesto track a lot. I'm not entirely sure I could listen to the entire album which means it's not exactly a keeper but I'll keep this track for now.

How beautiful is this woman's voice? Katie's album Alligator is finally out today and it's a definite keeper. It's Sunday-afternoon-tea-socks-and-cats type of music and I like it a lot. Definitely give "Carillon" a listen too.

Music That Is New to Me

I love this track a lot. It's the grandchild of the 1970s Focus track "Hocus Pocus" and love child of 1990s girl rock bands Breeders and Elastica. Mackenzie Shivers recommended this Sub Pop act to me and I'm glad she did!

Switching up the tempo completely is Ugandan rap icon GNL Zamba. Released in November 2020, this ambitious album reminds me a lot of Leftfield's Leftism.

Norwegian Astralseid wrap up today. This track reminds me of Dead Can Dance, Return to the Source and Branco de Gaia. I'd recommend listening to the whole album, on repeat, for several days.

Subscribe to the Keep or Delete playlist. I'll be adding more tracks every 4-6 weeks.

What are your discoveries of 2021 so far? Check out my review policy if you'd like me to listen to your track.