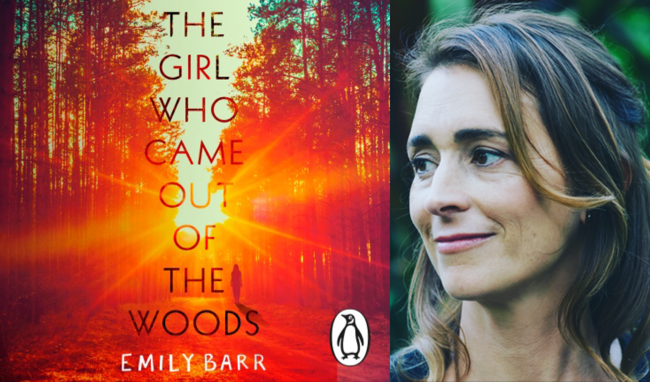 In the mid-to-late 1990s it seemed like everybody was checking out, some more than others. In a resurgence of 60's hippie culture, New Age travellers and other likeminded individuals were rejecting the millennium and all that it brought and going off-grid. I've often wondered what became of those people, the ones who simply disappeared and speculated about the lives of the children that grew up in cults and alternative communities.

Emily Barr's The Girl Who Came Out of the Woods begins in one such community. Set in a clearing in the woods in a remote south Indian forest, a group of people believe themselves to be all gods and goddesses. They are completely self-sufficient, shunning contact with the world outside, and the children in the community have never seen more than ten people in their lives.

Until one day when tragedy occurs during an annual celebration and sixteen-year-old Arty is forced out of the community and into a world she has never set foot in, in order to gain urgent medical attention.

Often hilarious but equally heartbreaking, The Girl Who Came Out of the Woods is Arty's story and how she comes to terms with this brand new world, considering that much of her previous knowledge was gleamed from Richard Scarry picture books. Everything is new to her and how is it that we all carry around phones that we use to do everything but talk to other people?

Threaded throughout the novel is a mystery and the promise of a dark secret. As the chapters flip between now and then, we have to wonder how it was that things went so wrong, how did Arty's mother land up in the clearing in the woods and is Arty herself now in grave danger?

At times uplifting in a way that reminded me of Slumdog Millionaire and at others downright terrifying, The Girl Who Came Out of the Woods is wonderfully unique and speculative (although I have started to notice other novels coming out with a similar theme). Arty often shows eye-rolling naivety - I honestly thought I'd dislocated my eyeball during one particular scene - and she possesses impossible amounts of good luck and fortune. But if you can suspend disbelief and forgive Barr for her slightly rose-tinted storytelling, there is a deeper message to be found about privacy, technology and how we build trust to develop deep and meaningful relationships.

I listened to The Girl Who Came Out of the Woods on Audible, narrated by Tamaryn Payne. Tamaryn did a great job of reading the multitude of characters in the story, so much so that you can begin to tell them apart by her voice. I obviously can't know for sure but I think I enjoyed this novel more on audiobook than I would have if I'd read it and I'd definitely recommend it.

I give The Girl Who Came Out of the Woods an excellent four out of five stars and recommend to fans of young adult thrillers, lovers of India and anyone with a healthy fascination of cults and communes.