Book Review: The Secret Seven: Mystery of the Skull by Pamela Butchart and Enid Blyton ★★★★☆

Enid Blyton’s beloved series The Secret Seven is back with a brand new adventure, Mystery of the Skull, based on Blyton’s original intrepid sleuth septet and written by Pamela Butchart.

I loved The Secret Seven and The Famous Five as a child and raced through all of the books, some more than once. With the exception of Roald Dahl’s books, no other books had such an enduring impact on my life. To this day, decades after I read them, I can still fondly remember sharing afternoons with the characters playing in copses full of tall grass and wild flowers or exploring old abandoned quarries and discovering hidden tunnels.

I would move on to the The Adventure series by age 10 or so, firmly choosing it as my favourite of all Enid Blyton’s series but it was The Secret Seven that started it all. This summer, 55 years after the final Secret Seven book was written, Hodder Children's Books hope to gain a whole new audience and are releasing the first ever official addition to the world of The Secret Seven.

Mystery of the Skull begins two weeks into the summer holidays when Janet and Peter return home from a fortnight with their gran. Peter discovers a skull in his bedroom and calls an urgent meeting of the Secret Seven. Where did the skull come from? How did it land up in Peter’s bedroom? And most importantly of all, what does this have to do with the new hotel down the road and its secretive proprietors?

With ample servings of sandwiches and cake, several moonlight adventures and significant levels of danger, this new adventure is a welcome return to a world that I never thought I’d visit again.

At first I was concerned that the book would feel dated, being that the originals were set in the 50s and 60s, or that the book would be obviously modernised but I was impressed to note that neither is the case. There is no obvious technology in the book but nothing to suggest that it couldn’t be set in the modern era either, making it accessible to a new generation of readers. 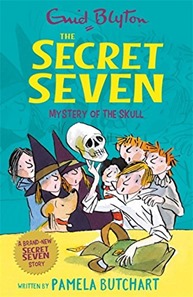 I don’t think this book (and others that I expect to follow in the series) will appeal as a children’s / adult crossover in the same way as the Harry Potter books have but it will appeal to the original fans of The Secret Seven and I think the innocence and simplicity of the story would be perfect for new readers aged 7 to 9.

For transporting me back to the world of my childhood and for a very clever story indeed, I give The Secret Seven: Mystery of the Skull by Pamela Butchart and Enid Blyton an excellent four out of five stars and would recommend to fans of Enid Blyton and to young readers. I will certainly be looking out for any new additions to the series.

The Secret Seven: Mystery of the Skull is published by Hodder Children’s Books and will be released on 12 July 2018. It is available for pre-order using the link below.

I received an electronic copy of this book from Netgalley for the purposes of this review. All opinions expressed on this site are always my honest and true opinion and are not influenced by the receipt of a review copy.