There is an old idiom: be careful what you wish for, it might just come true. A week ago, I was imploring people on Twitter to suggest a book that would be devastating and consuming. Somehow Ashley Herring Blake’s Girl Made of Stars rose to the top of my to-read pile and it was everything I wished for. The result? I’m crying my eyes out, torn to pieces by a book that is beautifully written and utterly life-changing.

I want to say so much about this book but it all feels awkward. In the opening pages, I felt that Girl Made of Stars was going to be a bit too much high-school-drama, too little ingenuity. I was wrong. In a similar strain, how can I describe this novel in a way that will draw the reader in, convince people that they need to read it? Words fail me but that is probably because I still can’t see properly through the tears. 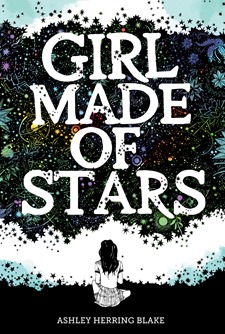 Girl Made of Stars is a novel about rape and sexual assault. It is about loyalty and belief, about the choices people make when both survivor and perpetrator are known to them. It is a story about numbers, how all of us know someone who has been attacked, how we probably know someone who has attacked someone else and how so many of us are carrying burdens of shame from our childhoods. Perhaps this is why this book has affected me so much, for I too have a story to tell.

This is the thing about Girl Made of Stars, it is a story for the #MeToo era but it doesn’t feel as if someone over there is telling their story. It feel intimate and painful, raw and unflinchingly real. As if this is happening to your best friend or as if your brother has been accused of rape.

Girl Made of Stars is published by HMH Books for Young Readers and I can definitely see this book making its way on to school curricula. It is a powerful book that will open up discussions about consent and sexual assault, as well as healing and the aftermath of abuse. I discovered this book on the Mock Printz book club on Goodreads and could definitely see this book being in line for the Michael L Printz award and other accolades.

For giving me exactly what I wanted in terms of devastation and consumption but also for telling an incredible, life-changing story, I give Girl Made of Stars by Ashley Herring Blake a superb five out of five stars and would highly recommend to anyone seeking superior literary fiction.