“Welcome to the Revivalist Church of the Bad Seeds, featuring none other than the Reverend Nick Cave himself”. That was the thought that flashed through my mind as I watched Cave lower himself into the crowd during his recent Skeleton Tree tour and place the hands of his adoring audience upon his chest. “Boom, boom boom”, he said, “can you feel my heartbeat?” He welcomed them, embraced them, took them into his inner sanctum in a cathartic, evangelical extravaganza. I knew then that experiencing this just once in a lifetime isn’t enough.

Cave was larger than life that night (and on the whole of the Skeleton Tree tour) and it seems only fitting that he should bestow on his adoring fans a live film and the chance to see it all over again. 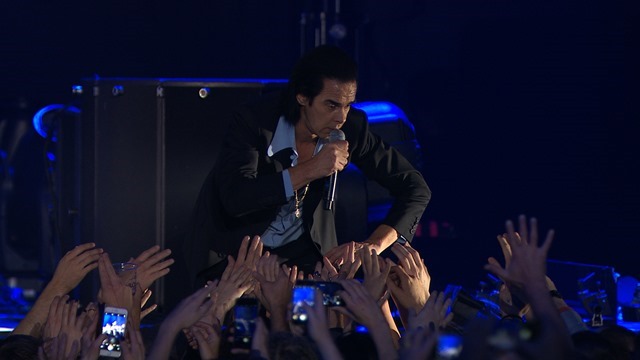 Recorded live in Copenhagen and directed by award winning filmmaker David Barnard, Distant Sky captures the entire concert at the Royal Arena in October 2017. It showcases the highs and emotions of the powerful Skeleton Tree tour that saw Nick Cave touring with the Bad Seeds for the first time in three years.

The cinematography and sound are superior in this production and sitting there watching a screening of the film was almost as good as being at the concert itself. If you have the chance, you need to see Distant Sky on the big screen. I have it on good authority too that I wasn’t the only viewer narrowly avoiding standing up and dancing at times.

The thing about a Nick Cave & The Bad Seeds concert is this: it’s almost impossible to cast your eyes anywhere other than in the direction of the man himself for he is utterly captivating. That is why Distant Sky is such a superb production; it gives fans a chance to see the mastery and talent that the Bad Seeds possess, to appreciate the sorcery that they wield to bring the music to life. They give everything to the music and nowhere was that as evident than at the end of “Jubilee Street” when the song descends into brilliant mayhem and the Bad Seeds visibly need to take a breath once it was all done. 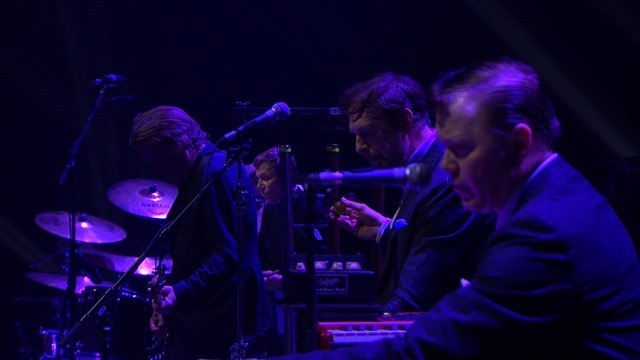 It was also moving to see the respect and consideration that the band have for Cave, the way they recognise his grief in tracks like “Girl in Amber” and handle it like it is a precious thing. For it is.

It would be impossible (and utterly unnecessary) to list all of the highlights in an enthralling and spectacular performance but I loved “Higgs Boson Blues” (with the aforementioned hands on heart moment), “Jubilee Street” and the unexpectedly low key yet utterly defiant rendition of “Mercy Seat”. The entire encore was notable from the moment Cave conjured from the audience synchronised hand clapping during “Weeping Song” to him inviting perhaps the biggest stage invasion of any concert tour ever during “Stagger Lee” to the scenes of fans bewildered and overwhelmed during the final song of the evening, “Push The Sky Away”.

Nick Cave gave a raw, almost desperate performance, ever confident in his swagger but equally concerned with whether the crowd was receiving his message and accepting the blessing he was bestowing on him. The message is this, there is possibly no other band as masterful as Nick Cave & The Bad Seeds and Cave will face adversity and deliver music that will move and destroy his audience. Fans should rush to see this magnificent film. 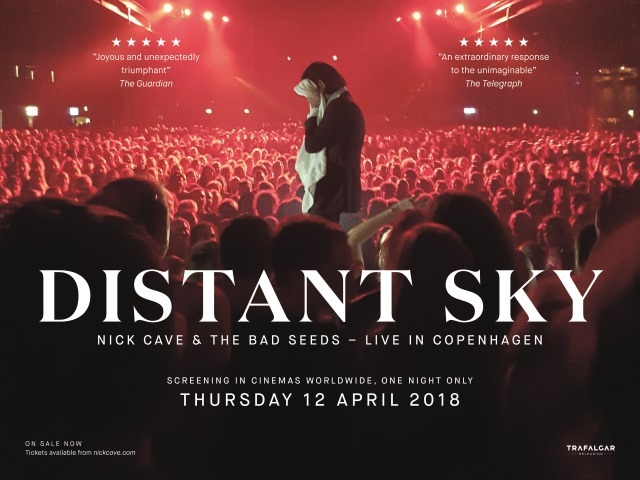 Distant Sky - Nick Cave and The Bad Seeds Live in Copenhagen will be screened for one night only in cinemas worldwide on 12 April 2018. Visit the Distant Sky website to find your nearest screening and be sure to book ahead.

Will fans be able to own a copy of the film for themselves? There is no word yet of a Blu-ray or DVD release of the film yet but I can only image that the demand will be very high for it.

Fans have been asking for years when Live in Copenhagen will come out on DVD. We don't have an answer yet but as a Christmas gift to his followers in December 2019, Nick Cave made the whole concert available on YouTube.