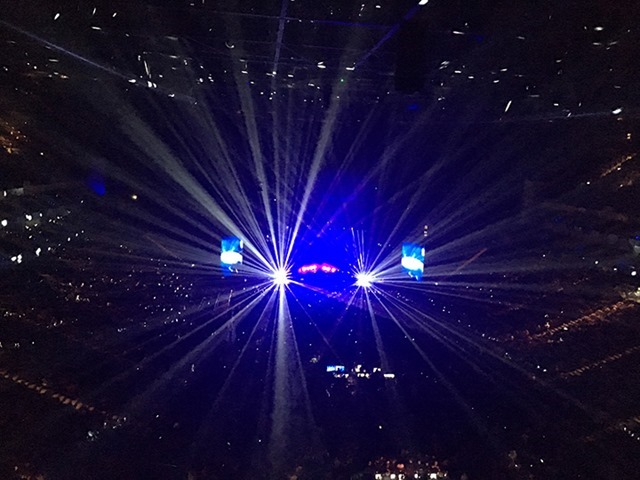 Elbow played at the O2 arena last night on the final date in their 2018 Arena Tour of the UK, Netherlands and Belgium. The O2 might be one of the biggest arenas in London but somehow Elbow managed to deliver a gig that seemed intimate and quite personal.

And it is personal, to me. My love affair with Elbow began almost 10 years ago when they released “Grounds for Divorce” from The Seldom Seen Kid. It became one of my favourite songs of all time and after feverishly playing it on repeat for several weeks, I purchase the album only to discover that it was full of absolute gems and easily one of the best albums of the decade.

Despite them becoming one of my favourite bands, I somehow missed out on seeing Elbow live. While the rest of the crowd went to see The Killers at BST in Hyde Park last July, I was definitely there to see Elbow but even so, I was blown away by their live performance. This bands knows how to perform and to somehow connect with each person in the crowd no matter how big that crowd might be. They are born for stadiums, arenas and festivals. They even managed to win over my seldom-impressed and musically-stunted husband which is a very rare feat indeed.

Elbow at The O2

The O2 might not be my favourite venue, in fact it is firmly my worst, but we didn’t hesitate to get tickets when we heard Elbow was playing there. The tour was a greatest hits tour of sorts to promote the band’s Best Of album, a peace offering to fans to tide us by as they head back into the studio again this year.

And it was absolutely marvellous. Guy Garvey isn’t the type to stand up in front of an audience and simply sing a couple of tracks before wandering off stage. Throughout the gig, he told us the story behind the tracks from the George W Bush-inspired “Leaders of the Free World” (now surprisingly relevant again) to falsely believing the Dust Bowl occurred near Texas in “Fugitive Motel” to introducing us to the wonderful world of Dennis and Lois in “New York Morning”. I loved Elbow before this gig, there just aren’t any words to explain how I feel about them now.

It all started off with The Seldom Seen Kid and “The Bones of You”, “Grounds for Divorce” and “One Day Like This” were always going to be the highlights of the evening for me but this was a gig that changed everything, that made me want to listen to the albums I hadn’t picked up before, to devour everything Elbow and to discover everything there is to know about them. I loved “Leaders of the Free World” and “Fugitive Motel”, felt goose bumps everywhere during “Magnificent (She Says)” and was quite transfixed during “Kindling (Fickle Flame)” which Guy Garvey sang as a duet with John Grant. I cannot wait to see what 2018 delivers in terms of new Elbow material.