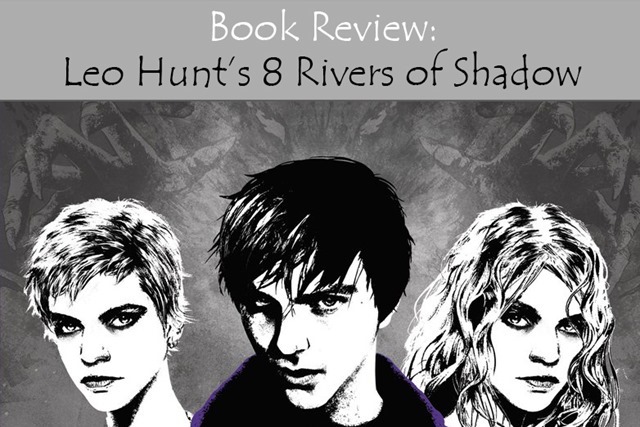 It's been fifteen months since I read Leo Hunt's Thirteen Days of Midnight, easily the most exciting supernatural novel of 2015. In the meantime I stalked Leo on Twitter, hanging on to every word he uttered about the release of the sequel. That day finally came in July but like a squirrel with a nut, I decided in my infinite wisdom to hoard the book away until I could devour it in one sitting.

Fast forward to now. I'm on vacation and I have indeed finished it in one setting and the reason I'm relaying this dull tale is because I'm rendered speechless. I had high hopes for Eight Rivers of Shadow and Leo Hunt has exceeded them in every possible way.

It's difficult to review a sequel without spoiling the first instalment so please proceed with caution if you've not read Thirteen Days of Midnight (but please also rush out and make sure you buy, borrow or steal it immediately).  (And I do mean steal it from your best friend, not download it from illegal sources).

Eight Rivers of Shadow begins about 5 months after the events in Thirteen Days of Midnight. Luke has banished his Host to Hell, struck a deal with the devil and, contrary to his assurances that he destroyed it, buried the Book of Eight in the garden. He and Elza are still together and Ham is still his untrustworthy and cowardly bloodhound.

Thinking he has put his days of Necromancy behind him, Luke has an episode at school which his classmates describe in a viral video as "Boy Gets Possessed at School" but which is closer to the Book of Eight running riot through his brain and threatening to supernova.

Ever on the outskirts of school society since he first inherited the Host, Luke barely has time to register Ash, a strange new exchange student at the school, before things start to go terribly wrong. Again.

Before he can stop himself, he becomes embroiled in the affairs of the new student, a powerful sorceress in her own right. He promises to assist her in resurrecting her comatose sister, so injured by Luke's own father, and in return, she promises to save Luke from the damaging effects of the Book of Eight.

With promises and betrayal, compromises and loss, Eight Rivers of Shadow is very difficult indeed to put down. Not that you’d want to. What appealed to me most about the book was the original and fascinating accounts of magic, a healthy dose of ghosts and scares, a fantastically imaginative journey through the land of the dead topped off with great characters and an addictive story.

Luke Manchett also happens to be one of my favourite protagonists of all times, second only perhaps to Gena Showalter’s Aden Stone from her Intertwined series. Although, if Leo Hunt actually finishes his series, unlike Gena, then Luke Manchett will definitely become my favourite.

Luke is a great character and great narrator even when you know he has made an error of judgement. Added that he is now comfortable with being an outcast and as sorry as it sounds, he is also confident of the love that exists in his life which is often his only saving factor.

Readers cannot help but adore Ham, Luke’s cowardly hound and it is wonderful to see him with an even bigger role to play in the story.

I give Eight Rivers of Shadow by Leo Hunt a superb five out of five stars and would highly recommend it to fans of supernatural young adult fiction, fantasy and science fiction.