On Set With Telephone Heartbreak 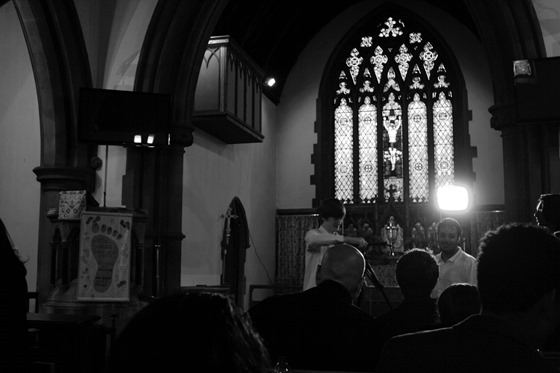 It's a dark and windy Saturday afternoon and we’re at St Paul’s Church Woodford Bridge where Aaryan Trivedi is shooting his short film Telephone Heartbreak. When I arrive everybody is being ushered inside the church and I hurriedly agree that of course I’d like to be an extra.

It’s the strangest film set I’ve ever been on. Usually extras have to sit in complete silence and master the art of staring into space without their eyes losing focus. That is certainly not the case here. We’re supposed to be at a funeral but we’re encouraged to speak amongst ourselves, remain fixated on our phones or generally ignore proceedings.

It’s not how we’re meant to act in a church and certainly not how we’d act at a funeral but that is the point. In today’s smartphone-obsessed culture, we simply can’t drag ourselves away from social media and the constant flow of information. 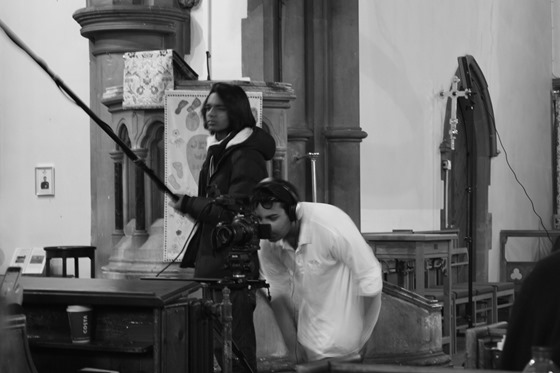 This is the world of Telephone Heartbreak, a short film that takes place over five days. When Mike’s girlfriend Becca dies in a terrible accident, the last thing he expects is for her to reach out from beyond the grave. The problem is that Becca is quite fixated on Mike and she’s not going ot let a silly thing like death get in the way of their relationship. Mike’s best friend Johnny is thrilled, he never liked Becca anyway. But will he stick around when things start to go wrong?

With filming done for the day, it is time to meet the cast. First up is Thomas Stephen, “but you can call me Tom”. Tom stars as Mike, the haunted young man who is at the heart of Telephone Heartbreak. With his soft Scottish accent and brooding looks, Tom is perfectly cast in the role of Mike.

Tom says he got his inspiration for his role from his real life but he assures me that unlike Mike, he is no pushover.

We talk for the longest time and I admit to Tom that I’ve stalked him on his Tumblr profile. He takes it better than I thought he would but then this is a man whose dead girlfriend has hacked into his phone and social media profiles from beyond the grave.

I then ask Tom whether he has been busy lately and he says I have no idea. He has been filming since early that morning and will spend the whole of Sunday at an audition before starting a new job on Monday. He wants to take film as far as possible but it is clear that he’ll be a success no matter what he does. 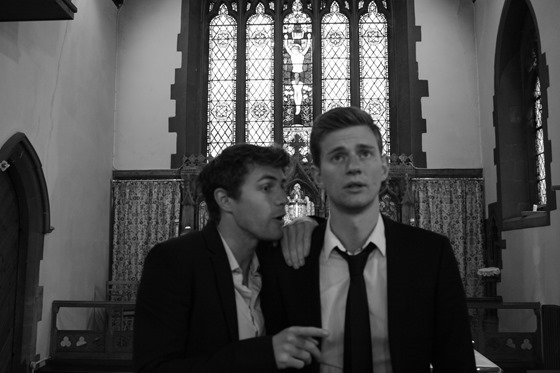 We’re joined by Derek Nelson who plays Johnny. You can feel Derek’s energy the minute you meet him and he is perfectly cast as Mike’s troublemaker best friend who is absolutely thrilled when Becca dies. Tom and I had been trying to decide on the appropriate genre for the film and Derek expertly advises us that it is a ‘creepy comedy drama’.

Tom and Derek agree to pose for some photographs and they slip easily into character. The pair are really relaxed around each other and it is clear that they’ve become good friends on the set.

Our photo session is cut short as we’re ushered out of the church. It appears that time is strictly regimented on a film set and at 12.30pm sharp, our time in the church is up.

Outside the church, the young actors congregate for a chat and a laugh and I move towards writer David Ruddock. We talk about his previous film Unspoken which was made for the 2013 48 Hour Film Project.

We’re soon joined by director, writer and producer Aaryan Trivedi and he and David tell me about how they met in a coffee shop. They wrote the script for Telephone Heartbreak together in under three hours and talk about getting the film out there. “Lots of people say they are screen writers”, Aaryan tells me, “but few can deliver”.

Aaryan tells me that he is the nephew of film producer Anant Singh and seems a bit taken aback by my squeal of recognition. Anant Singh is a South African legend, producer of the Oscar-nominated Yesterday and Mandela: Long Walk to Freedom. Aaryan recently spent time in South Africa working on Anant’s latest film Shepherds and Butchers and gives credit to Singh and his casting agent mother in getting him started in film. 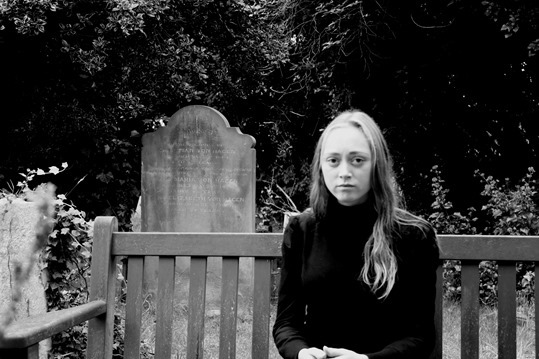 Finally I get a chance to speak to Emma True who plays the role of Becca. “Oh, you’re the ghost”, I blurt out, ever the cool one.

“I’m sorry to hear that”, I offer, trying my best to look contrite. “Yes”, ponders Emma, appearing for all the world like the spectre she plays, “I’ve never played a dead person before”.

It is plain to see that Emma is simply marvellous and she is very excited about this film. We talk a little bit about Becca, the spectral star of the film. Becca was controlling and manipulative during her life and certainly doesn’t let death get in the way of her ambitions. The thing is, Emma explains to me, Becca also carries a slow-burning anger and eventually becomes very hurt by Mike.

Speaking to Emma, I become aware of the depth of the script and the many layers in the story. All too soon it is time to depart but I leave sharing the cast and crew’s passion and excitement for the project.

Telephone Heartbreak is currently in post-production and will be submitted to various film festivals in 2016.