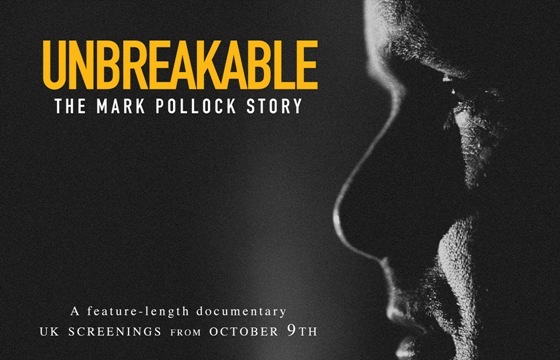 When you first hear about Mark Pollock, it’s hard not to marvel at the indomitable spirit of the man. After losing his sight at the age of 22, Mark became the first blind man to reach the South Pole in 2009 and completed marathons in the Gobi Desert and North Pole.

Tragedy struck in 2010 when Mark fell from a second story window, sustaining serious head, neck and back injuries. He was left paralysed and doctors warned that he was not reaching the expected recovery landmarks in his first twelve weeks of recovery. Things were not looking good but Mark refused to give up.

Unbreakable: The Mark Pollock Story is the incredible documentary about Mark, his early life, his failing eyesight, his triumphs and the journey he has taken since that fateful fall. Produced with the participation of the Irish Film Board, RTÉ and Rehab and directed by Ross Whitaker (When Ali Came to Ireland), Unbreakable is the story of how one man was by all accounts broken but somehow found the courage to triumph. 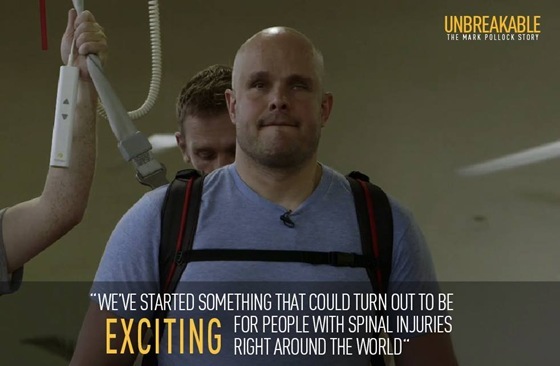 It is difficult to watch this film and not find yourself tearing up at some point. Unbreakable: The Mark Pollock Story  is life-affirming and inspiring, the ultimate display of what one person can achieve despite seemingly insurmountable obstacles and setbacks in life. It is also the story of Mark’s partner, Simone, and her determination to stand by Mark and honour the wedding vows that they were weeks away from making at the time of the accident.

The importance of this film goes far beyond the feel-good factor. Since the very first days after the fall, Mark and Simone have never given up and have done everything in their power to get Mark back on his feet and to find a cure for paralysis. With the help of robotics and the cutting edge in medical advancement, the couple continue their work to this day.

Unbreakable: The Mark Pollock Story was an unusual choice of film for me. I chose it because of the sporting element and because I thought my other half would enjoy it. I landed up being blown away by this incredible man and his massive achievements.

I give Unbreakable: The Mark Pollock Story a superb five out of five stars and would absolutely recommend this film.

Unbreakable: The Mark Pollock Story is out in cinemas today, 9 October 2015 and will be out on DVD and EST from 23 October 2015.

You can watch the trailer below and you might also like to visit Run in the Dark, a night time runners event and the Mark Pollock Trust who aim to raise €5 million by 2020 to find a cure for paralysis.