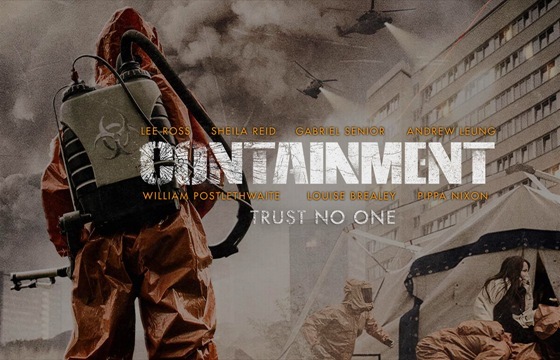 Meet Mark, a failed artist who is estranged from his wife and son. One morning Mark wakes up in his grimy tower block apartment to discover that he can’t open his window and his front door is sealed firmly shut with a thick layer of industrial strength glue.  Mark has somewhere to be today and if he can’t get out of his apartment, he is going to lose his wife and child forever.

As it begins to dawn on Mark that this is in fact not a sick joke, he sees that people in hazmat suits are swarming around the grounds of the tower block and residents of other tower blocks are stuck, just like him.

Soon his neighbours come crashing through the adjoining walls and they form an alliance of sorts. Together they must band together to protect them from their greatest threat but that is the problem. Is it the mysterious virus, the people in hazmat suits or human nature itself that poses the greatest threat?

No water. No power. No explanation. No escape. What would you do? Written by David Lemon and directed by Neil Mcenery-West, Containment is an independent British thriller lighting up film festivals across the globe. The film stars Lee Ross (Rise of the Planet of the Apes), Louise Brealey (Sherlock), Sheila Reid (Benidorm) and Andrew Leung (Lilting) and introduces Pippa Nixon, William Postlethwaite and Gabriel Senior as Nicu. Lee Ross won Best Actor in a Feature at the Massachusetts Independent Film Festival 2015 and the film was part of the official selection at the NOLA, Henley Fringe and Southampton Film Festivals in 2015.

Containment is speculative film-making at its best. You never really see evidence of the viral threat, not in any conclusive way. What we do see is human nature and how quickly a situation like this might escalate. Containment is Kafkaesque in many ways, an illustration of how the situation in The Trial might have progressed had Josef K taken the violent way out. Ultimately, there is no morality in a viral apocalypse, only survival. 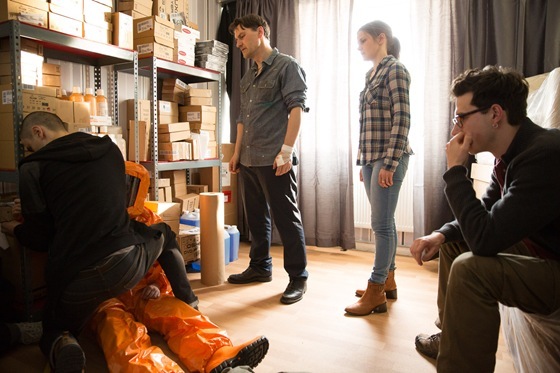 Filmed on location in Weston Towers, Southampton and in studio, Containment takes what is presumably a large-scale viral disaster and confines us to four tiny apartments in a tower block. We get that sense of oppressive claustrophobia from the very first scene, Mark could probably touch all four walls if he stretched his hands out and he can hear every word from his neighbour Enid. With the adjoining walls smashed down and accumulating detritus from seven panicked people throughout the 24 hours that the film takes place, that sense of claustrophobic and discomfort pervades through the film until the audience is as desperate to get out of the apartment as the cast.

The strength of Containment lies in the experience of the cast and the impossible moral dilemmas that they must navigate. Lee Ross shines as Mark, a failed parent and husband who must step up to lead the group and maintain order. There are strong performances from Andrew Leung in his role as the volatile Sergei, Louise Brealey as the conflicted nurse Sally and Pippa Nixon as Hazel, the terrified and desperate Hazmat. 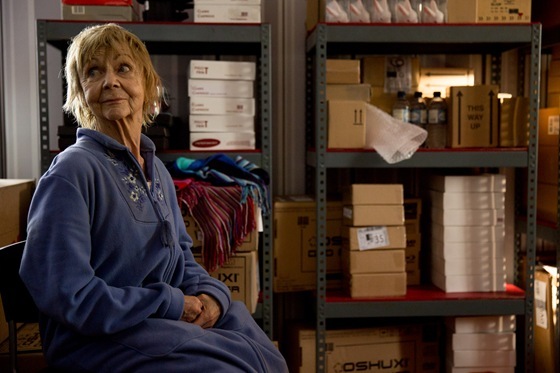 Sheila Reid stands out with her nuanced performance of Enid, an aging woman who moved into the tower block in its post-war heyday and has seen its decline into squalor. The most interesting performance came from newcomer Gabriel Senior as the mute Nicu.

I give Containment (2015) an excellent four out of five stars and would recommend to fans British independent film.

Containment is enjoying a limited UK cinema release in the week of 14-17 September 2015. You can catch it at the Southampton Harbour Lights Picture House, London Rich Mix in Bethnal Green and the Showcase Cinemas in Bristol, Derby, Manchester, Liverpool and Leeds.There will also be a viewing at Brighton Duke’s at Komedia on 21 September 2015 at 9pm. Visit the Containment website for more details.

The film is available in the US Nationwide on VOD & on all the major US cable networks: iNDemand (Comcast, Brighthouse, Cox, Time Warner), Vubiquity (AT&T, Verizon, Suddenlink, Charter, Mediacom), Dish & DirecTV.

You can pre-order Containment on DVD from Amazon.com and Amazon.co.uk.