It would have been difficult to follow up the success of last week’s explosive Doctor Who season opener “The Magician’s Apprentice” and in some ways, I was expecting to be disappointed with “The Witch’s Familiar”. I expected sloppy writing and convenient resolutions but was ultimately quite pleased with the episode. It was utterly grim in many ways and for a long time I thought it was going to sink in sentimentalism but it redeemed itself in the end and I have very few complaints.

This review will not be as laden with spoilers as last week’s episode but I’d certainly not recommend watching unless you’ve seen it so here is your 3 second spoiler warning.

*** Spoiler warning. Close this webpage now if you have not watched Doctor Who – “The Witch’s Familiar” *** 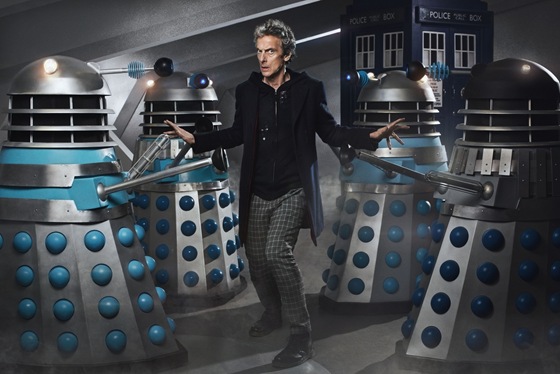 I really liked the opening scene with Missy and Clara on the hill and Clara hanging upside down. I hadn’t wanted their supposed extermination to be the end of the world for Missy and Clara and was pleased with how it was handled. I liked the idea of Missy sharpening a knife and could almost imagine her cooking Clara over a fire – it displayed her carnal nature and reminded us that she is dangerous by nature.

What Was Utterly Disgusting

With the notable exception of Bones, it is rare that a TV episode will turn my stomach but many aspects of this episode were quite grim. It starts off with what I thought would be the most disgusting thing I could ever see and I’m pretty sure I won’t be able to erase the image of (half of) Davros lying discarded, his wires and innards spilling over the floor. Of course, that sickening visual was replaced less than a second later with The Doctor in a Dalek tin can.

It turns out, that was nothing. Moments later, Clara and Missy are in a sewer and the walls are positively oozing with snot-like organic matter. As I type this, I’m taking a long, deep breath to try settle my tummy because that was bad enough before Missy informs us that this is a Dalek graveyard.

Minutes later it turns out that Snakeman Colony Sarff is back and we’re treated to him swallowing up The Doctor. It is really like one grim, disgusting concept after another and I loved it!

The pinnacle was Missy pulling a dead Dalek carcass out of a tin can – it really is a credit to this show that all of this has such a strong effect on the viewer and I’m certain I wasn’t the only viewer going “eew”.

There was more to come though. There was the sight of Davros’s watery, rheumy eyes; the idea of him being deep and meaningful and, worst of all, Davros smiling. It was simply horrendous. 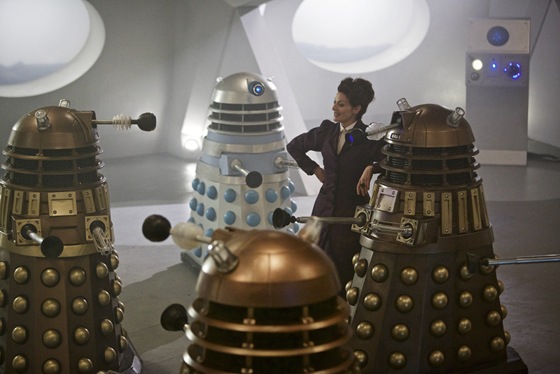 For a large part of the episode, I really didn’t like the sentimentalism and the idea that Davros and Missy were acting entirely out of character. I was bored with Davros moping on about dying and was just wishing he’d get it over and done with when The Doctor himself asked him to get on with it.

The scene with Davros’s eyes and eyeball-curdling smile was even worse when he asked if he was good. I found myself yelling at the TV “the &%$£ you’re a good man!”

I was therefore as thrilled as could be when Davros began stealing The Doctor’s regeneration energy and a little part of me danced when Missy began acting like an evil little troll.  Of course she’d try get The Doctor to inadvertently kill Clara because she thrives on chaos!

I thoroughly enjoyed Michelle Gomez in her role as Missy and I certainly hope this isn’t the last we’ve seen of her. 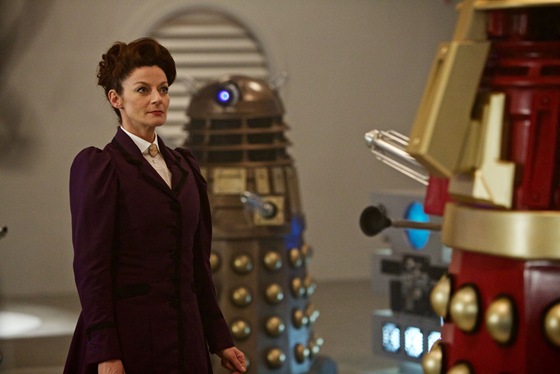 Which neatly brings me to what I really didn’t like – Missy’s line “tell him the bitch is back”. Firstly, this is a children’s show and I didn’t like it when Molly Weasley used it in Harry Potter & The Deathly Hallows and I liked it even less here.

Secondly, no. No Moffet, no. Don’t ever call a woman a bitch you misogynistic piece of crap. That word is so problematic and no matter Missy’s motives and reasons, you don’t reduce her thoughts and actions to one slur.

That’s all I have to say on the matter – feel free to disagree.

That problem aside, I enjoyed the episode and was pleased with the ending. I didn’t like the idea that The Doctor would hurt a child and was glad that he rescued our blue-eyed little boy Davros.

I’m also thrilled that The Doctor got his T.A.R.D.I.S. back but really, really hope that he gets over the idea of wearable technology and sonic sunglasses soon. They are nasty!

One final thought – you’d have to have been listening closely to catch it but when Missy handcuffs Clara, she’s waxing on about dark star allow and says:

At this point you should be asking yourself what daughter? I really hope there is more to come because this would be an incredible storyline. 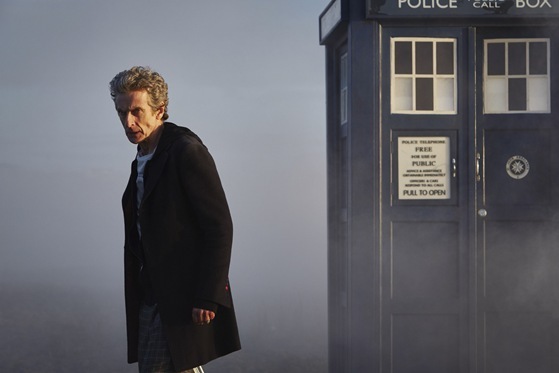 As always, the one liners and quotes made the episode and these are some of my favourites.

“Make your own stick” – Missy

“Because if Clara Oswald is really dead, you’d better be careful how you tell me” – The Doctor

“You keep saying that, but you keep not dying. Can you give it some welly?” – The Doctor mirroring my thoughts exactly.

"My Daleks are afflicted with a genetic defect” – Davros

“What defect?” – The Doctor

“Respect, mercy for their father” – Davros

“Is this the conscience of a Doctor or his shame?” – Davros

“Compassion… grows strong and fierce in you like a cancer” – Davros

“You’re my secret favourite, don’t tell the others” – Missy to the entire Dalek hive mind

“It wasn’t me who ran, Doctor. That was always you” – Missy

Doctor Who returns with “Under The Lake” next Saturday evening 3 October 2015 at 8.25pm on BBC One. The monsters look incredible and I simply cannot wait for this episode! 7 more sleeps.