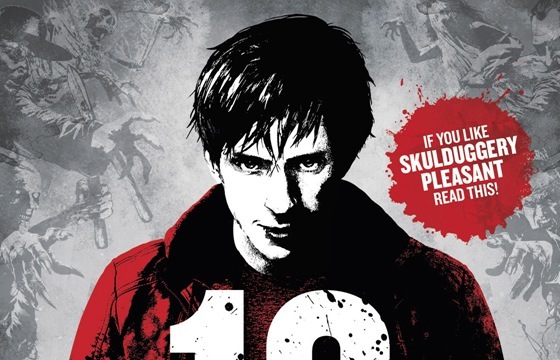 There is nothing ordinary about Luke Manchett. Good looking and popular, Luke is on the rugby team, has his eye on the beautiful Holiday Simmon and is not above teasing local outcasts like Elza Moss. The problem with treating people badly, is you never know when you might need their help.

That day arrives when Luke's estranged father dies and bequeaths to him a most unusual inheritance. Lured into signing a document with the promise of untold riches, Luke accepts ownership of the Host, a collection of restless and vengeful spirits. When it becomes clear that Luke has no idea how to control them, the spirits become increasingly belligerent, hell-bent on exacting revenge for being enslaved for so many years.

As Halloween approaches, Luke realises that aside from his deerhound Ham, he has only one ally and everyone he knows and cares for is in danger.

Thirteen Days of Midnight is the stunning debut by author Leo Hunt. Hunt began writing the story in his first year at the University of East Anglia when he was just 19 and he has said that it arose from a desire to write something he would have wanted to read when he was a teenager. In that, he has been more than successful.

Thirteen Days of Midnight is fast-paced, exciting and extremely entertaining. I loved the idea of the Host and especially liked that each of the eight ghosts had a distinct personality and purpose. The Host exceeded my expectations in their capacity for evil and Hunt pulls no punches as the spirits impose their will and run riot across town.

Luke Manchett is a fabulous anti-hero, the popular boy-turned-outcast who gets his comeuppance when all his so-called friends desert him as soon as things get weird. Written in the first person, from Luke’s point of view, Thirteen Days of Midnight sucks the reader into Luke’s impossible predicament from the very first page and doesn’t release them until the nail-biting, breathtaking finale.

If Luke is falling from high school grace, it is the former outcast Elza who proves to be a more than formidable and competent force in the book. Without divulging any spoilers, I will say that I loved that traditional roles were reversed and that true character triumphed over popularity.

My favourite character in the book was Luke’s cowardly deerhound Ham. I haven’t encountered a canine character this well-written since Garth Nix’s Disreputable Dog, star of his novels Lirael and Abhorsen. Hunt is obviously a very observant dog-lover and he has said that he based the character on his deerhound Ruby.

Fans of Thirteen Days of Midnight will be thrilled to know that a sequel is in the works. Leo Hunt has confirmed that he has written a draft of the sequel, to be called Eight Rivers of Shadow, and it will hopefully be released in Summer 2016. I love the title and cannot wait for this release.