Music Review: This Way To The Egress - Great Balancing Act 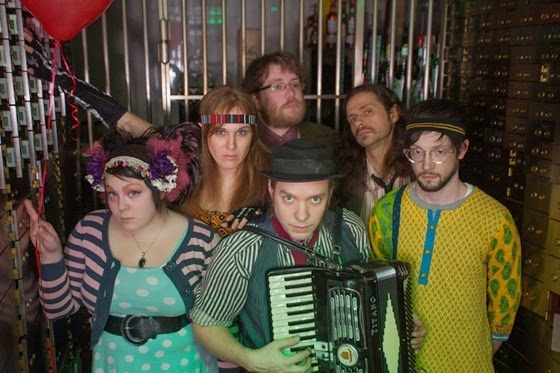 I have a challenge for you but it's going to take a little bit of playing along, so bear with me. Go out, have a pretty crap day and come home feeling tired, frustrated and grumpy. Are you there? Now put on Great Balancing Act, the latest album by gypsy jazz troupe This Way To The Egress.  I predict you'll be bouncing along to the opening track "Let's Not Pretend" and singing along by "Tarantella". There, don't you feel better now?

Hailing from Bethlehem, Pennsylvania  This Way To The Egress are "Tyrant" Taylor Galassi on accordion and vocals; "Saddle" Sarah Shown on piano, fiddle and vocals; "Krispy" Zach Martin on drums and glockenspiel; John "Toobie Doo" Wentz on tuba and vocals; Jaclyn “The Kidd” on electric guitar and six-string banjo; Joe "Bone" Lynch on trombone and backing vocals; and “Easy” Chet Sullivan on trumpet and backing vocals.

The band list Primus, Tom Waits, The Flaming Lips, Gogol Bordello, Madonna, Django Reinhardt, Queen, and Die Antwoord as their influences. Any band that lists South Africa’s most prominent lunatics amongst their influences is okay in my book.  If I had to define it, I’d say that This Way To The Egress sound like a burst of carnivalesque mayhem in an otherwise drab world whereas their debut single “We Won’t Go” was described as an "exuberant drinking song that sounds like a room full of inebriated Russian Gypsies". 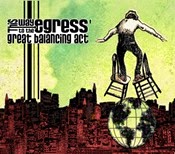 Great Balancing Act is the third album from This Way To The Egress and is out on 19 May 2015. The band is fully independent and crowdfunded the album through a successful Kickstarter campaign.  Recorded in 2014, the album was produced by Brooklyn-based producer Roger Greenawalt and all album art was done by the band's own Saddle Sarah.

Great Balancing Act opens with “Let’s Not Pretend”, a foot-stomping, accordion-swinging tale of irreconcilable differences that features a fantastic mid-track polka. The tempo drops a notch with “So It Goes” where Saddle Sarah channels her inner PJ Harvey and promises that “I would sell our souls to the city that had the most. We could meet downtown and I will watch you drown more than your memories into your sauce”.

Picking up the tempo again with “Earworm” and the dramatic vaudevillian “What Do Ya Want”, the album tumbles into my favourite track, “Tarantella”. Like I said in the introduction, if you’re not singing along by this track then I’ve somehow failed in my mission.

Throughout the following tracks “You Never Know” and “This Side of Jordan”, it occurs to me that This Way To The Egress is perfect for the Gogol Bordello fan who has been seeking a little more cynicism in their gypsy jazz tunes. This is only confirmed with “Devil’s Breath”, a tale of stolen souls and card-playing devils where “children stomp and play on your remains, your head is on a pike within their games”.

After “Rogue Trip”, Saddle Sarah takes up lead vocals again in the mournful yet brilliant “Not Around”. Next up is the mutinous first single “We Won’t Go” and I’m definitely getting the inebriated gypsies analogy.

Great Balancing Act polishes off 49 minutes of chaos with "Lucy, a story about your mother", a track that has all the dramatics and moralising of a musical finale on Broadway. It’s a pretty fitting end to the album.

For sheer originality, upliftment and cynicism, I give Great Balancing Act an excellent four out of five stars and would recommend to fans of gypsy jazz and indie folk.

The album is available to purchase at Bandcamp, Amazon.co.uk and Amazon.com.

An advance, electronic copy of this album was provided to me for the purposes of this review and all opinions contain herein are my own. This review contains affiliate links.