I choose this audio book as I am currently working overseas and I’ve been enjoying reading about other people’s culture clashes. This book is written by Jesse Armstrong (of Peep Show fame) and his voice comes through - a wry self depreciating sense of humour. The voice of the story sets in immediately as the main protagonist (Andrew) is at a party with his upper class girl friend's family ‘so posh they never use the word posh’ where he discovers that to question the distribution of wealth is to be chippy. The relationship between the protagonist and the girl (Penny) is central to the book. 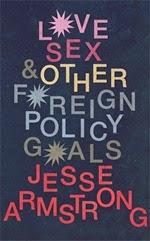 At the start I found this frustrating, it felt like a marginally humorous love story; something that would work as a sketch or short story but was going to be tiring as a novel. Andrew is 19, has not gone to University and does not know what he is doing with his life… searching around for purpose he finds Penny. They decide (with a mismatched bunch of friends and daddy’s credit card) to take a van to Bosnia during the Balkan conflict and deliver a message of peace.  In some ways this seems like its going to be a classic 1970s road story, a bunch of idealistic teenagers travelling across Europe, finding themselves, having sex and taking drugs. The humour comes in part from a failure to find themselves or much in the way of sex.  Even when they meet the intended recipients of the ‘message of peace’ the group of travellers remain focused on themselves.

As they set off across Europe there is a ‘big’ story. The conflict, the idealism of youth, the warmth of communities towards entertaining strangers. Andrew, however, isn’t focused on these big stories but on his little story, his burgeoning but unrequited love, jealousy and his thoughts and feelings. It was written with humour and the bigger stories unfolded despite Andrew’s lack of focus.

This is a good light book and Chris Addison narrates it well, seemingly the perfect voice for Andrew.

An almost impossible book to review, I give Love, Sex and Other Foreign Policy Goals an okay three out of five stars.

You can buy Love, Sex and Other Foreign Policy Goals by Jesse Armstrong on Audible.

Jade is an international spy currently masquerading as an accountancy lecturer in Bangladesh. She loves books, food and indie pop.