Filmed in 13 days in 2013 in London and Cornwall, with an estimated cost of £8,000 and set over one weekend in February, Hinterland is the directorial debut from Harry Macqueen.  It stars Macqueen as Harvey and musician Lori Campbell as his childhood friend Lola. When Lola is forced to return to London after several years abroad, Harvey arranges to take her on a road trip to the seaside cottage where they spent many a summer growing up. Out of season and with a million years since their last visit, Harvey and Lola embark on a journey of self-discovery where they contemplate everything that has changed and everything that still connects them.

It is easy to see why Hinterland caught the eyes of the judges at the Raindance Film Festival where the film was nominated for Best UK feature in 2014. It is a visually stunning film featuring bleak coastal seascapes and inclement February weather contrasted with cosy scenes of mutual affection in pubs, around a campfire and in the guest house. The metaphor is clear, the warmth of Harvey and Lola’s relationship will transcend the bleak climate in which they find themselves.

The film begins with political commentary about the predicament of young graduates and the burden of student debt. We glimpse a provocative statement on Harvey’s bedroom wall stating that “we are the children of Ayn Rand and Margaret Thatcher”. We are promised a scathing attack on the current socio-political climate but ultimately, Hinterland doesn’t quite deliver that.

The difficulty with Hinterland is that is it realistic to a fault. The truth is that everyone goes through a crisis in their mid-twenties where they don’t know what they are doing and wait in a limbo between studying at university and not quite pursuing the career of their dreams. The difference is that most people don’t warrant having a film being made about them and in this instance, it is possible that neither did Harvey and Lola.

It’s hard to take two privileged middle class twenty-somethings seriously when they’re road tripping across England in a Volvo and they have the option of returning home when things don’t quite work out as planned.

Nevertheless, Harry Macqueen and Lori Campbell give a tender portrayal of two idealistic if not naive young adults who are on the verge of beginning their adult lives. Under Harry Macqueen’s direction, cinematographer Ben Hecking captured the mood of the film perfectly and I predict that this will not be the last we see of both of these talented young filmmakers. Likewise, Lori Campbell is clearly talented as a singer-songwriter but I do hope that we will see more of her on film. A highlight of the film was her performance of her track “September”. 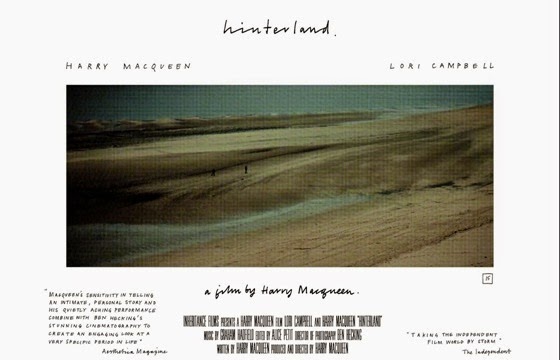 I would recommend Hinterland to lovers of British independent film and give the film three out of five stars.