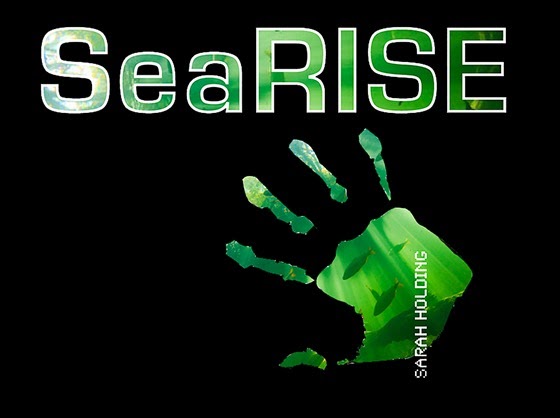 I have excellent news! If you’ve been dying to get your hands on a copy of the third and final instalment of Sarah Holding’s SeaBEAN trilogy then you’re in luck because this month I’m running a huge SeaRISE giveaway!

SeaRISE is out now and continues Alice’s adventures in time travel as she is transported to a fantastical future land devastated by climate change, inhabited by cyborg parrots and 3D printed trees and insects, and unable to support life as we know it.

In SeaRISE, Alice awakens in 2118 in a place she doesn’t recognise. She doesn’t remember who she is or how she got there but she begins to remember being interrogated by Colonel Hadron. Who is this terrifying man and what does he want with her? Worse yet, will Alice and her friends survive this ordeal and will they ever get home?

This month on Addicted to Media I’ve teamed up with MidasPR to give away a SeaRISE goody bag filled with signed copies of the entire SeaBEAN trilogy as well as a SeaRISE  t-shirt and arm-band. There are also additional prizes for runners up with TWO copies of SeaRISE to give away.

The giveaway is open to UK residents only. I’m giving you a whopping EIGHT chances to win using the Rafflecopter widget below. Remember to click on the widget to confirm which options you’re going with so that you can be entered into the random draw. You can earn extra entries each day by tweeting about the competition.

I’m also thrilled to announce that I’m taking part in the Official SeaRISE Blog Tour. Make sure you come back on Wednesday 10 December for an exclusive guest post by Colonel Hadron where he will try to sell us his vision of the C-Bean.