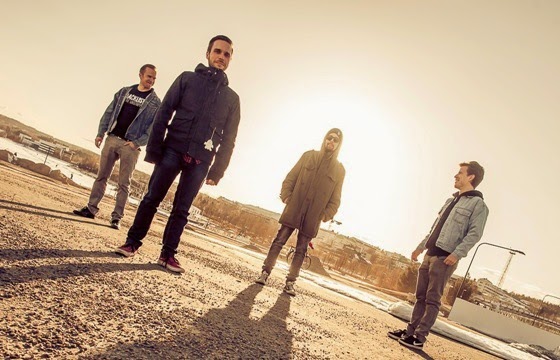 Sumia is a band that was a long time in the making. Two of the members have been together since high school but it was only when vocalist Joni joined in 2011 that the current line up was sealed and the band took on their distinctive name. Hailing from the Finnish town of Jyväskylä, Sumia was brought together by a faith in the power of music and a determination to push through the restrictions of being confined to a single genre. This is immediately clear when listening to their debut album – in  the space of a couple of tracks I was reminded of Fuel, Curve, Smashing Pumpkins and Nine Inch Nails.

Sumia are Joni on vocals and guitar, Samuli on guitar, Olli on drums and Jussi on bass.

Sumia cite a vast range of influences including dark garage, melodic punk, electronic music and hip-hop. Determined to focus on their music and work on combining those influences, the band recorded their debut album over two years and were sure to complete it before hitting the live circuit. They recorded and mixed with Tuomas Kokko at Electric Fox Studios and mastered at Virtalähde.

The result was debut album Until We Shine Again. The lyrics are English but I feel that the Finnish influence is unmistakeable with dark, mysterious swings and slow, melodic beats. The standout tracks are “One Single Look” and “Sunbath”.

It is worth paying a visit to the band’s Soundcloud page where they’ve uploaded three of the tracks from their new album.

You can buy Sumia’s debut album Until We Shine Again at Inverse Records.