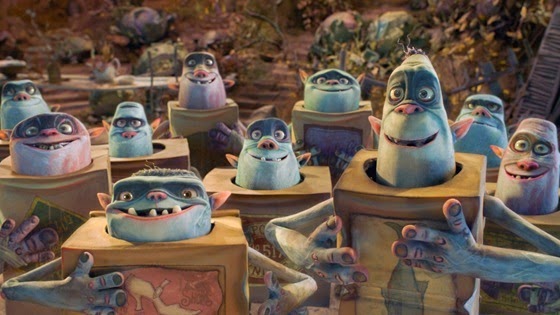 Deep below the cobblestones of the Victorian town of Cheesebridge live the horrible Boxtrolls, cave-dwelling monsters who come out at night to steal what Cheesebridgers hold most dear: their children and their cheese. These foul box-wearing creatures have stooped so low as to steal the young orphan boy Eggs and raise him as one of their own. Of course, if Monsters, Inc. has taught us anything it’s that monsters aren’t always all they’re made out to be and sometimes the most horrible of them all have the biggest hearts.

That means nothing to the town’s elite who employ a dastardly gang of exterminators to rid Cheesebridge of the scourge of Boxtrolls once and for all. Lead by the slimy Archibald Snatcher (voiced by Sir Ben Kingsley), they will stop at nothing until the town is rid of every last Boxtroll. Will Eggs and his privileged young friend Winnie be able to save the day or has the end finally come for the Boxtrolls of Cheesebridge? 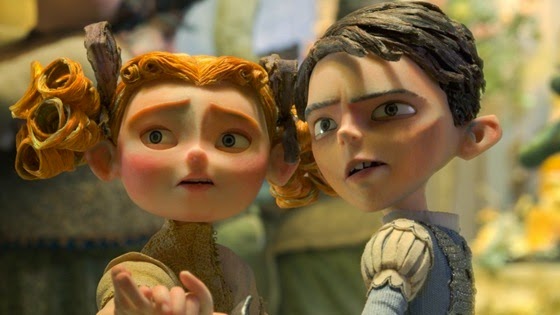 The Boxtrolls is the latest 3D stop motion feature by Laika Entertainment, the makers of Coraline and Paranorman. Based on the children's novel Here Be Monsters! by Alan Snow, the film is produced by Graham Annable and Anthony Stacchi (Antz). The Boxtrolls stars relative newcomer Isaac Hempstead-Wright as Eggs, Elle Fanning as Winnie and together with Sir Ben Kingsley features a host of other stars including Toni Collette, Simon Pegg, Richard Ayoade, Nick Frost, Jared Harris and Tracy Morgan.

As we’ve come to expect from Laika, The Boxtrolls is pretty dark at times and there was one part that was quite scary for some of the youngest children in the audience. I’d certainly recommend parental guidance for younger viewers and perseverance too, there were lots of smiles at the end of the film and children clamouring over each other to be photographed with the Boxtrolls.

Let’s face it though, animated and stop motion films aren’t really for children and The Boxtrolls is definitely a film for adult children. I was looking forward to seeing The Boxtrolls from the very moment I first heard about the project and I am pleased to report that I wasn’t disappointed. The stop motion animation is superb and this is a film that was simply made for 3D. There is a fantastic section at the end of the credits where the fourth wall is broken and we get a glimpse of the gargantuan effort that goes into making a stop motion film. 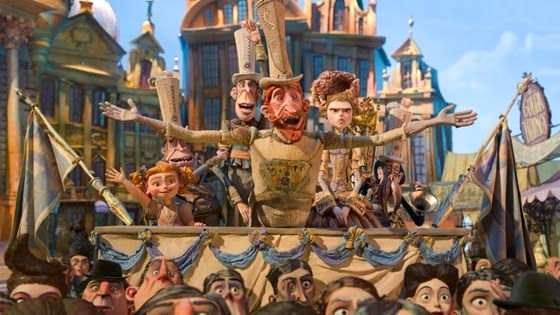 The characters themselves were beautifully designed; Ben Kingsley’s Snatcher was so convincingly greasy that I cringed every time I saw him. At any one time there would be scores of little Boxtrolls on the screen yet every one was unique and identifiable. Boxtrolls Fish and Shoe were definitely the stars of the show but Clocks was my favourite.

Fans of Steampunk and Victoriana will love The Boxtrolls and as a fan of both, I especially liked Eggs’s navigator goggles and homemade, junk-repurposed suit. 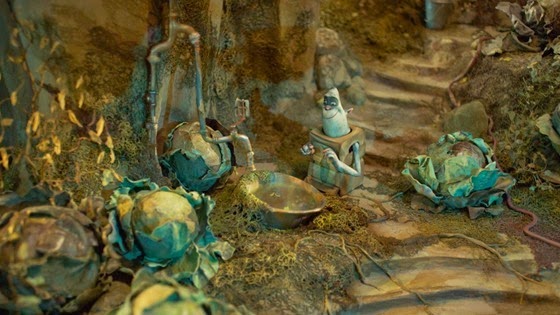 Perhaps the best aspect of The Boxtrolls is its absurdity, specifically the importance of cheese and the notion of a young boy who doesn’t realise he’s not a troll. There was something almost Dr Seuss-like in the premise of the show and I liked that a lot. This is a feel good movie that is perfectly choreographed to a classic rock and roll soundtrack.

The Boxtrolls is out in UK cinemas on 12 September and hits cinemas in the USA on 26 September. I would certainly recommend this film to adults and children alike and foresee a grand future for The Boxtrolls full of merchandising and awards.

I give Boxtrolls five out of five stars.