Zethu Dlomo is an up-and-coming South African actress who recently starred as Dinky Magubane in romantic comedy Fanie Fourie’s Lobola. We gave the film a five-star review and caught up with Zethu to discuss her role, the script and the filming of this South African comedy about two people from very different backgrounds who fall in love.

Can you tell us a little bit about how you heard about the role and the audition process?

I auditioned for the film at the MLA offices in Rosebank, Johannesburg. They are my acting agency in South Africa and Moonyeenn Lee is my agent and the casting director of the film. She called me in to audition, I did, the director was extremely happy with my performance, and I got the role. When I was auditioning, Eduan (my co-actor who played Fanie) was reading opposite me. We had great acting chemistry and I was grateful to have had a good audition which I actually enjoyed. When I got the role, I was asked to come in to read opposite a couple of actors trying out for the role of Fanie. After a few guys came through, I asked the director where Eduan was because I really clicked with him. So Eduan was called in, we did his audition, and he got the role. Which was just awesome.

What were your first thoughts on reading the script?

When I first read the script I got pretty excited. It was fresh and different, and it was a fun script to get into. The story was just beautiful, all I wanted to do was shoot, and I looked forward to seeing the final product.

Where did filming take place and how long did it take?

Filming took place over a course of 6 weeks. We shot in various locations in and around Johannesburg and Pretoria. The rugby scene was shot at Loftus Stadium in Pretoria, the club scenes were in Melville, Johannesburg. The first official date was shot at the Union Buildings in Pretoria, and the township scenes were shot in Brazzaville just outside Pretoria. There are many other locations we went to, but all were in and around JHB and PTA. 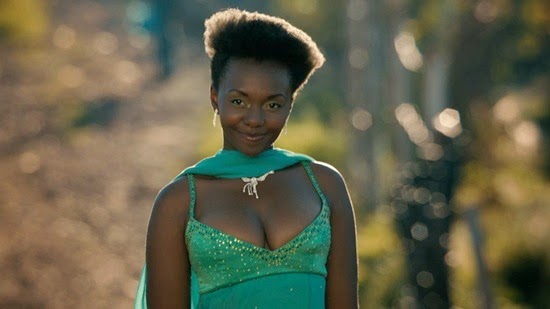 Which was your favourite scene in the movie to film?

My favourite scene had to be when Fanie comes to pick Dinky up to go to his brother's wedding. That beauty shot was not easy to shoot because I was in heels on a rocky path. But I worked it lol! And it looks fabulous on screen. I also enjoyed being a springbokkie, but yoh! That paint was a nightmare to take off.

And the most awkward?

The most awkward scene to shoot was the one where Dinky was dancing on her bed. Dancing to no music. I can do that. But when I watched it I said shame, Dinky cannot dance lol. 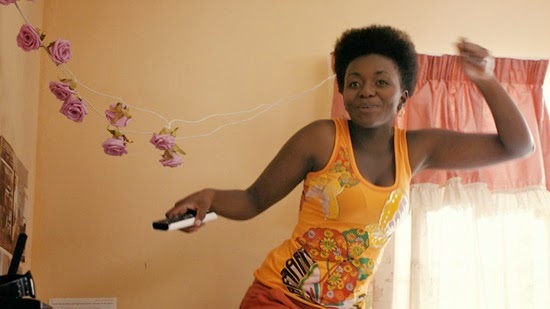 Were there any takes or scenes that did not quite go the way you expected them to go?

There wasn't really a scene which took a direction that was surprising or 'out there', I think whatever alterations were done on action complimented and enhanced the scenes on the script.

I can’t accurately remember how long it took to get painted, it probably took about an hour to an hour thirty minutes to apply. Removing it was just a nightmare. Showered for an hour and still couldn't get it all completely off. So I'd get home and bath again. Such a process!

The film has been released in the United States this week on VOD. Which parts of the film do you think might be most difficult for overseas audiences to understand?

I don't think that the American audience will have difficulty understanding, we accept that there are different cultures and traditions in the world. It is the core theme of this film which ties everything together, and it is love. Love is universal, it has no colour or culture. Everyone understands love. Besides the language (which is subtitled) I think nobody will walk away from watching the film confused. They would've learned something new, like lobola negotiations and seeing the different cultural backdrops of the characters, but I hope nobody walks away confused.

Can you tell us a little bit about what you're working on next?

I am currently rehearsing a play with 3 good friends of mine, we are the Thenx Ladies. We are workshopping a satirical play which hold up a critical mirror to society; reflecting on issues that affect our society today, how media affects the youth in society and our communities. I am also about to start rehearsing a play called "The Proposal" which is part of a Checkov Festival taking place in Johannesburg from the 2nd of June to the 16th I believe. I'm looking forward to sinking my teeth into it. :)

And finally, can you tell us why people should rush to see Fanie Fourie's Lobola?

People must see Fanie Fourie's Lobola because it is a beautiful, feel good film. A well written and directed romantic comedy which has an amazing cast and unique storyline. Ladies, the guys will enjoy it too. They may not admit it but they know they will ;) lol!
But seriously, it is a great date night movie. I hope everybody enjoys it!

Fanie Fourie’s Lobola was based on the novel of the same name by Nape ‘a Motana and directed by Henk Pretorius. It won Best Film at the 2013 Seattle International Film Festival and Best Comedy at the 2013 Sedona International Film Festival. Following its cinematic release in South Africa in 2013, the film is now available on VOD on iTunes, Xbox, Playstation and additional VOD platforms.

I'd like to thank Zethu for taking the time to answer my questions.