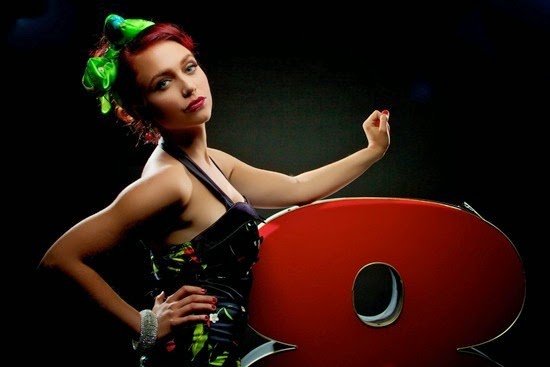 How gorgeous is this woman? This is Swiss singer/songwriter Scilla Siekmann who has the dubious honour of reaching the top 10 on the Eurovision Song Contest  in 2010 with her song “Barbie Doll”. She is definitely a lot more plastic and mainstream than my usual fare but I took a listen to her new single and it’s really quite good.

Scilla has a honey and treacle voice that sounds like a cross between Betty Boop and Tallulah from Bugsy Malone and she is as cute as a button.

Now residing in the States after receiving degrees in music business and independent music production from the Musician’s Institute of Hollywood and UCLA, Scilla is hoping to break out in the US market. She cites Etta James, Aretha Franklin, Amy Winehouse and Joss Stone as influences and I definitely think I hear some Katie Melua and Norah Jones in there too.

Based on her Neo-Cabaret set, Scilla has released her self-titled single Scilla through Amazon.co.uk and iTunes and I’m expecting great things from her in the future. The single features three tracks and I was really impressed by the level of production and the originality of her songs. This is not the usual standard that you’d expect from a music student straight out of university but then Scilla is obviously not your average musician. She has works with Bruno Mars’s producer Steve Lindsey on the single as well as engineer Ichi Suezawa.

If I had to pick a favourite out of the three tracks, I'd pick "Remind Me What Love Is" although I do like the upbeat tempo of "You Can't Break Me".