Are you one of those people who lives with a set of headphones in your ears? I am and I spend a good portion of my day plugged into my iPod listening to music. As a commuter, I need something that won’t leak sound and will simultaneously cancel out external noise. You have no idea how loud the London Underground can be until you’re trying to block out the roar of air being pushed through the tunnels.

I’m also looking for all-around performance across a wide variety of music genres. I often read headphones reviews which recommend the products for a specific music genre such as rock, classical or dance. That simply won’t work for me as I have an extremely eclectic music taste and in any one day I’ll switch from listening to indie to folk metal to cheesy 1990s house. (I hate pop music so thankfully there is no risk of me listening to that).

I also choose to listen to in-ear headphones rather than professional headphones because I find the latter really irritate my ear piercings. 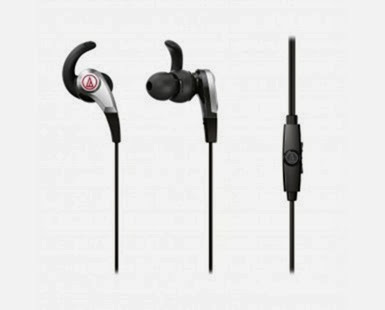 So when I was offered to review a set of Audio-Technica SonicFuel ATH-CKX5iS Headphones, I jumped at the chance. I was sent the ATH-CKX5iS which retails at Amazon.co.uk for £40.00 and on the Audio-Technica site for £35.

The ATH-CKX5iS is a range of in-ear headphones with an ear-conforming 360° rotating eartip. They feature a C-tip accessory which fits the shape of your ear and supports the snug placement of the eartip in your ear. This model also includes in-line mic and volume controls which are compatible with most smart phones including my iPhone 5S.

For the very technically minded, I can tell you that the ATH-CKX5iS range returns a 15 – 22,000 Hz frequency response with a 100 dB sensitivity and an impedance of 16 ohms.

I decided to go ahead with my normal crazy music selections and took notes across the various albums.

The first album I listened to is one of my favourite albums of all time, Jean-Michel Jarre’s 1978 electronic masterpiece, Équinoxe. This is a perfect start because I’ve been listening to this album since I was a little girl and am intimately familiar with every single note and key. I was immediately impressed that the ATH-CKX5iS headphones delivered a rich, ambient sound and handled the bass without distortion, even at full volume (which is, quite frankly, the only acceptable listening volume for this album).

Next up was The Coffin Daggers eponymous 2002 debut album, an excellent example of the neo-surf genre. The album sounded fabulous through the headphones and brought a real smile to my face (and ears). I loved the sound of the rolling guitars and bass guitar, the drums and the organ. Once again, the headphones performed well at high volume with no distortion but the sound was rich enough to resonate through my body.

Having listened to mostly instrumental music up to that point, I decided to opt for some vocal jazz instead in Norah Jones’s 2002 album Come Away With Me. I was really impressive by the clarity and quality of the sound returned by the ATH-CKX5iS headphones. I felt like I could hear every pluck of the guitar string, and it felt like I was sitting on the edge of the stage in a piano hall with the band playing. Once again I was impressed with the richness and depth of the sound; I had been feeling that my previous headphones (of a different brand) were delivering a flat sound for some time.

Staying with the vocal theme, I decided to listen to Johnny Clegg and Juluka, a South African band who play mbaqanga, a variation of Zulu traditional music. While not a spoken word album, Johnny Clegg tells stories through his songs and there is great emphasis on the words and sounds that he sings. Again, this is music that I have been listening to since I was a child and I practically know the album off by heart. What impressed me most with the headphones was that I could hear every syllable of every word sung and I detected a clarity of sound that I had not heard for quite some time.

My only real disappointment came in listening to music from the folk metal genre. I’ve been at a loss to explain my sudden affinity to this genre over the past year but I can’t get enough of Eluveitie, Korpiklaani and Ensiferum. With the ATH-CKX5iS headphones, the music sounded strangely flat which does make sense. Folk metal is best delivered with a forceful, loud sound and with a greater focus on clarity and control, I imagine that the ATH-CKX5iS is not the right headphones for this genre.

I opted instead for something a little less loud in the form of the brand new Walter Sickert & The Army of Broken Toys album Soft Time Traveler. This steam-crunk album combines the best of steam-punk genre with good old carnivalesque mayhem. The Broken Toys are a multi-talented ensemble and I found that the ATH-CKX5iS headphones delivered the sound of the ukes, violas, accordians and mandolins really well.

Finally, I really thought this set of headphones came into its own with the dance genre. I listened mainly to progressive trance, funky house and techno and worked my way through my Global Underground collection. The ATH-CKX5iS headphones displayed a fantastic control of deep bass notes and delivered progressive highs with ease. These are definitely not one-genre headphones but they are best suited, it seems, to electronica and dance.

Would I recommend these headphones? Definitely. I have no complaints with the sound and my only complaints come from a comfort perspective.

The C-tips do a great job of keeping the eartips snug and in-place in your ears and you can immediately notice the reduction in outside noise when you put them on. However, it is really sore if the C-tips snap out of your ears.

I also found that the headphone cables quite be quite noisy if you are moving; that is, the cables themselves will return an air sound which is a common complaint in many brands of in-ear headphones.

I solved both problems by clipping the cables to my jacket, thus preventing them from moving about too much and snapping out of my ears. Once I did that, I had no complaints and will be using these as my headphones of choice in future.

I was provided with a set of the Audio-Technica SonicFuel ATH-CKX5iSBK headphones for the purpose of this review and these are the headphones featured in the images above. As always, this represents my true and honest opinion.