It is not easy recovering from an episode like “A Lesson in Vengeance” where your primary reaction is from a fan’s point of view and you are disappointed, perhaps angry, with the turn a show has taken. Nevertheless, I made the decision to judge all further episodes of Merlin on their own merit and only refer briefly to my quarrel with Guinevere’s confounding change of heart.

In the dead of night, a lone boy breaks into the castle at Camelot. He runs into an evening patrol lead by Guinevere, but the queen insists that he is harmless and must be left to go on his way. The boy finds Merlin where he introduces himself as Daegal, a Druid. He needs Merlin’s help to aid his ailing sister who is lying half a day away in the Valley of the Fallen Kings.  Merlin ignores his better instincts and leaves with the boy.

While Merlin runs into trouble in the forests of Albion, Guinevere is left to weave her deceit in Camelot with tragic consequences. 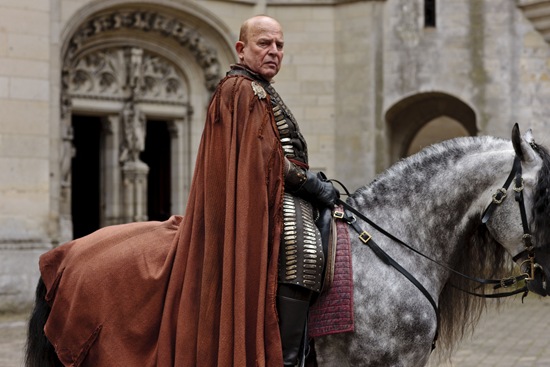 Spoilers for “The Hollow Queen”

The Return of Love

Ignoring Guinevere, there was a lot to love about this episode.

In a way, I love that Merlin was so easily trapped, that after everything he has seen, he would rush to the aid of a Druid family.  Ultimately, it was this benevolence and morality that was his saving grace in this episode.

Colin Morgan proved his worth yet again and I loved Merlin’s look of dawning realisation that Daegal had lead him astray.

I was thrilled that we finally learned how Morgana got to the bottom of the pit with Aithusa in “Arthur’s Bane part 2”, that it was at The Sarrum's hands.  We finally learn what was wrong with Aithusa, that she had been crippled by her confinement in the well with Morgana because there was not enough space for her to grow.  Thumbs up to the writers for finally answering some of our questions!

for the season 5 soundtrack. 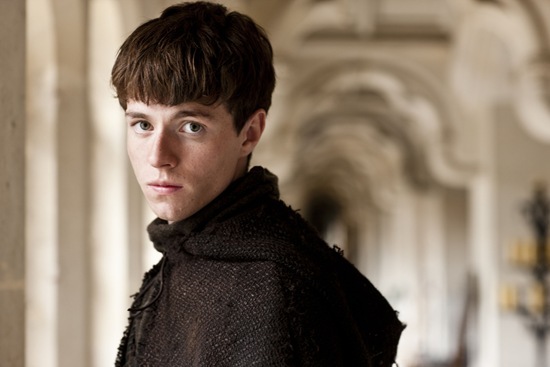 I loved Daegal (Alfie Stewart) and I did so even when I thought he was evil.  I love that he came back to rescue Merlin and that he wouldn’t leave his side.  Mostly, I liked that after everything he’d been through with the loss of his mother, Daegal was still able to recognise the good in Merlin. And yes, Alfie Stewart is on Twitter: @AlfiexStewart.

Non-verbal communication is key in this season with the enemy among us in Camelot.  There is so much that the characters cannot say as they cannot risk Guinevere realising that she has been exposed.  With that in mind, I loved the look on Gaius's face when he confirms that Guinevere is no longer on their side. Like Colin Morgan, Richard Wilson is a truly remarkable actor. 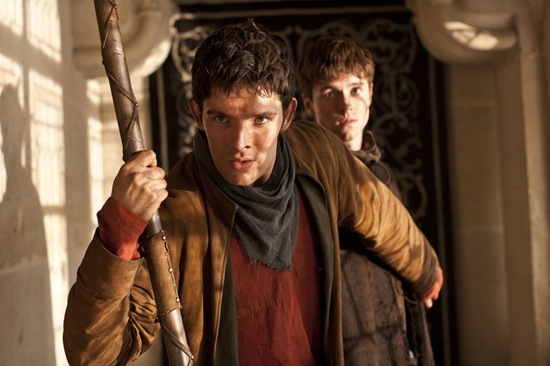 I adored Merlin in “The Hollow Queen” and his truly courageous battle to overcome the poison, fight the bandits and make it back to Camelot in time to save Arthur’s life.  He was absolutely brilliant in this episode.

I was cheering when The Sarrum (John Shrapnel) double-crossed Guinevere.  Of course he would do so! That is the problem with newcomers to the arena of betrayal and sedition, they get arrogant and play all their cards.  Well, The Sarrum saw right through Guinevere.

I loved the scene in the great hall and I loved the crossbow-wielding assassin Albin (Matthew Clancy) , his death and the death of The Sarrum.  That scene with Merlin leaning over the balcony was incredible, showing how truly powerful and masterful he is. 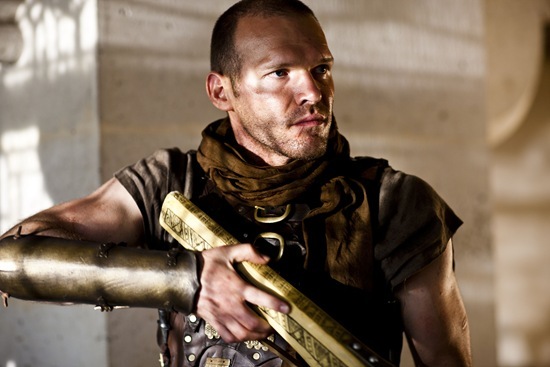 And finally, I loved Merlin and Guinevere's visual stand off in the final scene and that while he didn’t contradict the queen, he didn’t capitulate and rush to support her version of the events either. He did not reveal what he knows about her and the game is most certainly still on.

I was really impressed with “The Hollow Queen” and equally impressed by the parts that made me sad.  I really did not like Guinevere’s betrayal first of Arthur and later of Merlin.  The latter was especially hurtful because Merlin has never once waivered in his greatness and morality (nor in his support of Guinevere, peasants and sorcerers) and whatever the Pendragon kings might have done, Merlin did not deserve that.

I did not like the scene with Merlin lying alone and poisoned but that was absolutely redeemed by Daegal’s return.

It was really sad that Daegal perished in the end but it certainly fitted in well with the rest of that scene. 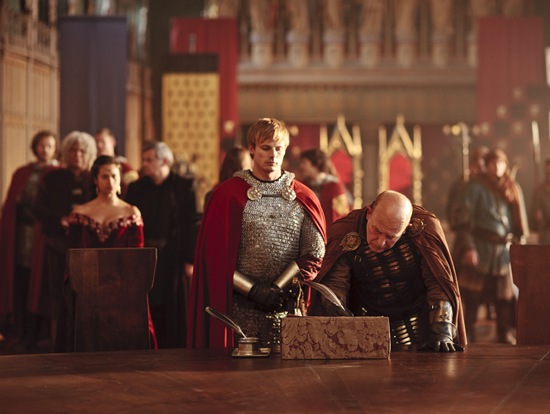 I said I’d be brief, so here you go: I still don’t accept evil Guinevere.  I don’t accept her change of heart and I don’t know where the writers are going with this.  As with her acts of treason and murder, how is she ever going to come back from this? She will eventually be exposed and when she is, she has to remain forever a nemesis or be cast out of Camelot and punished. These acts of betrayal are too absolute and there can be no absolution.

I feel kind of cheated. Was it too much for the writers to allow the simple serving girl some joy? It seems to me that she is repeatedly being reminded of her place in the lower classes of society, that as a woman and a peasant, the writers could not allow her to rise to the true status of a great and powerful leader.  And yes, Guinevere of old was a bit of a traitor who conducted an affair with Lancelot but that is not what we’ve been told for almost five full seasons of Merlin. 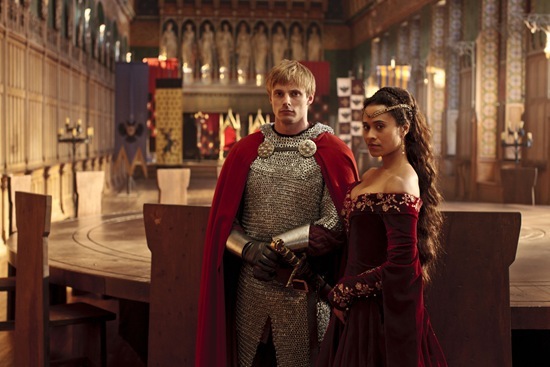 Daegal: "Why are you being like this? People I've met, they're... not like you. They don't care, I don't matter"

Merlin: "Don't ever think that. We all matter"

Gaius: "He also has a fondness for assassinating his friends"

Arthur: "I doubt we'll ever be that close"

Guinevere: "I have a simple proposition, one that would be mutually beneficial. You kill Arthur, I assume the throne and in gratitude give over one third of Camelot's lands to Amata"

Bandit: "You don't even have a sword"

Daegal: "Merlin, you may be a warlock but you need that treated. I'll help you. Please, please" 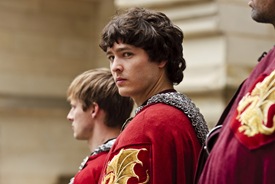 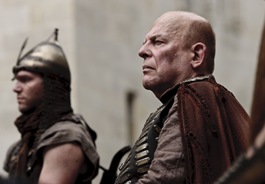 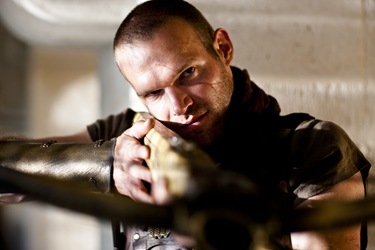 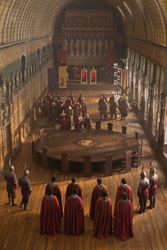 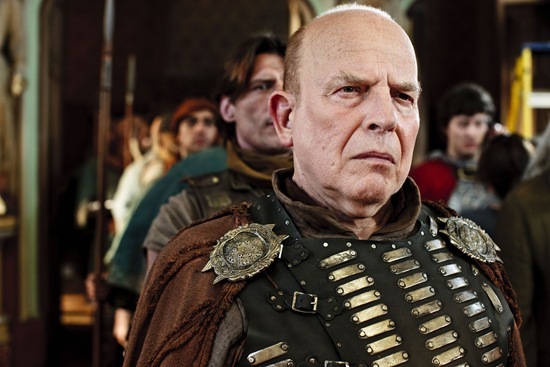 BBC Merlin returns on Saturday, 1 December at 8.00pm with “With All My Heart”.