Book review: Strangers in the Land by Stant Litore

Israel, 1160 BC.  The ravenous dead stumble across the land in their endless pursuit of the living. Torn apart by memories of her first encounter with the walking dead, the prophetess Devora must face her greatest fears and face them head on.  Armed with just an iron blade, Devora is accompanied by the Nazarite Zadok, the warrior Barak and the slave girl Hurriya.  Together they must travel across the Promised Land to Walls and beyond to rid the land of the undead scourge.

Strangers in the Land is the third book in Stant Litore’s The Zombie Bible series which rewrites the Old Testament from the entirely plausible point of view that the events described were in fact part of a zombie apocalypse.  It might sound a bit ridiculous but in the execution Strangers in the Land is ultimately devastating while tackling the universal issues of inequality, prejudice, otherness and the lengths humans go to in order to devour one another.  It is also a lot of fun. 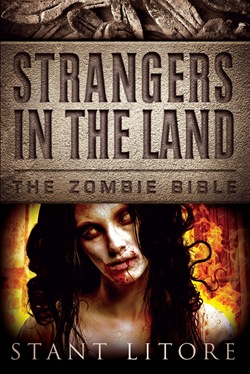 To say I loved this book would be an understatement.  I could not put it down and felt my heart pounding against my ribcage as the characters raced across the land in an attempt to catch up with the hordes of unseeing and insatiable dead. Not for one minute did I stop to think that this was not how it actually happened in the Bible, so convincing was Litore’s version of his story.

Litore’s attention to detail was impressive and the biblical land of Israel came alive on the pages as he described the tent dwellings of the Hebrews, the cedar houses of the Canaanites and the different tribes and people across the land. I loved the notion of a land in the process of climate change as the fertile valleys began to dry up and the desert took over.

Of particular note is the characterisation of Devora and I have to say that this is one of the best characterisations of a female protagonist I have read in ages. Devora is strong, brave, confident and powerful and despite her prejudices and errors of judgement, she grows and becomes better for it.  This is no damsel in need of saving by a man and in fact, the tables are often turned as Devora commands those around her.  I really wish there were more characters like this and I can’t believe that they would only be found in a biblical setting.

Finally, I loved the theme running right through the book of strangers in the land and the parallels to our own time and the fact that we still hate each other when in reality, we're all human.

I have no hestitation in giving Strangers in the Land five out of five stars and will certainly be reading the rest of the series in order to feed my insatiable hunger for more of Litore’s historical mashups.

Strangers in the Land is available to purchase on Amazon.com