Before we begin with this week’s Merlin review, I think it is only fair that I make a slight disclaimer.  I have flu, not your average bad cold but a bone-aching, feverish, dismal sort of affair which requires pretty strong flu meds and lots of sleep.  I mention this for three reasons: this review might not make any sense at all, it might or might not be shorter (or longer) than usual, and my experiences of last night’s episode may have been a little exaggerated.  Then again, it might be that it really was that terrifying and ultimately horrible. 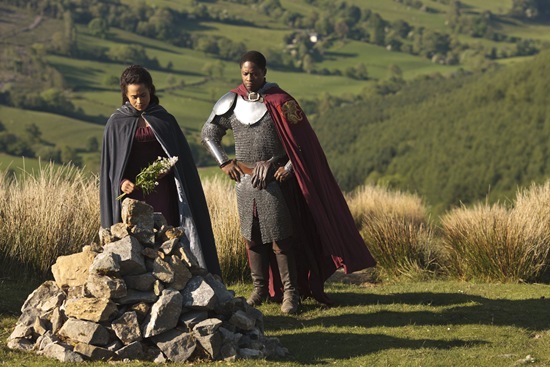 “The Dark Tower” begins on a hilltop high above Camelot where Elyan (Adetomiwa Edun) and Guinevere stand by their father’s grave.  It was a grim reminder of all that the siblings had lost at the hands of the Pendragon dynasty, as Uther Pendragon might have executed their father Tom but it was Arthur who arrested him in the first place.  Not only did Guinevere lose her father in that episode (“To Kill the King”, season 1) but it was also a major turning point for Morgana.

Some spoilers for “The Dark Tower” 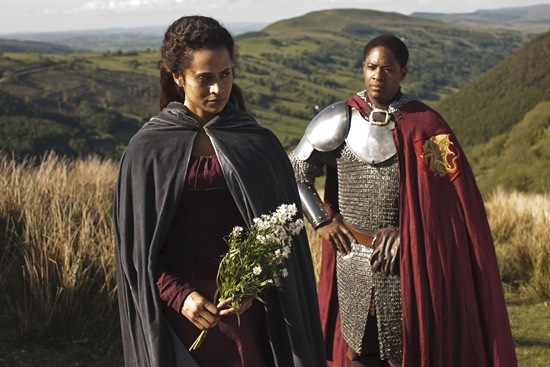 On the way back to Camelot, Morgana ambushes the party with venomous vipers and kidnaps Guinevere, whisking her off to The Dark Tower.  But, as we’ll learn, the Dark Tower is not a real place but the place of nightmares and terror and all that is dark and evil in the world.

What Terrified Yet Impressed Me

This episode was absolutely terrifying, in an almost not-safe-for-children kind of way.  Yes, that might be the fever talking but I jumped out of my skin on several occasions.

Nevertheless I really loved the writing in “The Dark Tower”.  I loved the mythology of the Tower, that it is something Arthur knew of, that it is terrible and that we must not speak of it.  As Mab explained, it is not real but the embodiment of fears and bad dreams and I really appreciated the imagery and symbolism in this episode (did I mention I was a Psychology major?).  I loved the Impenetrable Forest and Mab’s instructions for escaping it but I have to admit that it fell flat in the execution when Merlin used magic to find his way instead.

The Dark Tower itself was just horrible and hats off to Angel Coulby for her fantastic acting in this episode.  I loved her portrayal of Guinevere’s defiance in the face of utter horror and despair.  The Dark Tower was Guinevere’s personal house of horrors with the mandrake roots, screams, shadows, laughter, darkness, whispers, hallucinations, footsteps and constant dripping.  I guess it was no wonder that Guinevere might have cracked under that pressure. 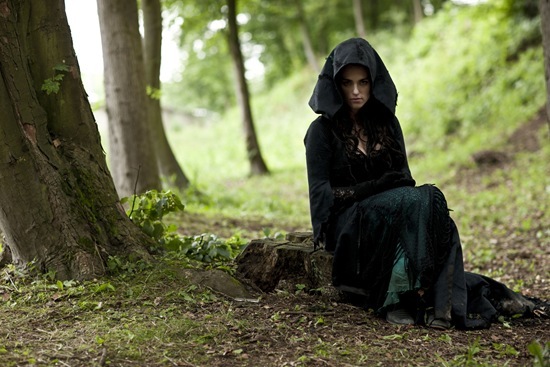 I was also impressed that Morgana (Katie McGrath) reached a new level of manipulation, evil and nastiness in “The Dark Tower”.  She was absolutely menacing and malevolent and I always appreciate when they write a bit of depth into her character.

I loved that Arthur’s men, and Merlin, would not turn back when given the option of doing so.  Each had their own reason, be it sister, Queen, friend or damsel in distress, but each asserted once again why they are the Knights of Camelot. 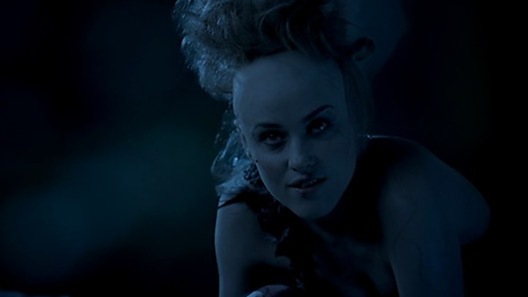 Kerry Wenham was simply spectacular as Queen Mab and I honestly think this is one of the best-written scenes in the whole of Merlin.  It was that good that I replayed the scene over and over again (thank you Sky +) and have practically quoted the entire scene below.  I just loved her cadence and the flow of her lines in riddles and rhyme.

I really loved the music that played in the scenes with Morgana and Guinevere and how it changed slightly when Guinevere was defiant.  It was eerie and creepy and really quite beautiful.  Perhaps we could encourage the BBC to release the score from this season?

In which I discuss the ending of “The Dark Tower”

I apologise, I really did try to think of a better title for this section but this one captures my enduring impression of the climax and ending of “The Dark Tower”.  It is strange, but in the opening scenes of this episode, I thought to myself how nice it was that Sir Elyan and Guinevere were finally getting a bigger storyline that wasn’t absolutely crappy and involved one or both of them being sentenced to death. 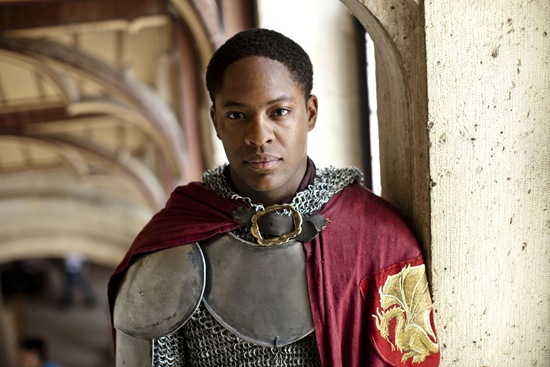 I just don’t understand why Elyan had to die and I don’t see how he (or Merlin) could have done anything differently that would have taken Mab’s advice into account and not lead to his death.  Perhaps it was simply a warning that the Knights of Camelot must act as one or they will be defeated?  This is definitely the fan in me talking but after all of the crappy things Elyan has gone through in previous seasons, did he really have to die defending his sister?

Part of me also doesn’t understand the whole scene with Guinevere and Elyan in the tower.  If she had broken by then, if she had finally succumbed to the terror and gone all Stockholm Syndrome on Morgana, why did she not at least say anything to Elyan, to protect him?  Especially if the sword was meant for Arthur? The whole idea is that Morgana was somehow able to prove to Guinevere just how evil the Pendragon’s were and how she wasn’t part of them, but the only person that let Elyan die was Guinevere.  How was it Arthur’s fault that Elyan rushed ahead to save his sister?

That same part of me just doesn’t believe that Guinevere would have broken down, no matter how much terror Morgana subjected her to.  Don’t forget, her last words to Morgana before the scene where she finally breaks down in her arms were, “no, whatever twisted game you’re playing, I want no part in it. I would rather stay here and die”.  I find it hard to accept the final scene or believe that Guinevere has gone over to the dark side. 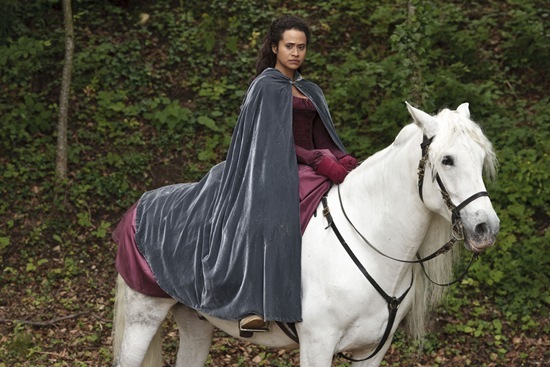 Morgana: “Sleep my lady for it will be some time before you do so again”

Guinevere: “I don’t know what cruel trick you’re playing but I will not be broken by you”.

Queen Mab: “Why, I’m Queen Mab. I am the spirit of this place and all the places that bring despair to men’s hearts. Few have ever seen me Emrys, you should count yourself fortunate”.

Queen Mab: “Oh, little one. You shouldn’t have to ask. Left is right and right is left and the way behind is the way ahead.  It is simple”.

Queen Mab: “The tower is not a real place. It is the heart’s rest, the mind’s deepest fear, the stillness in the hummingbird’s eye”.

Queen Mab: “Then I will talk in rhyme. Heed my words with due concern or one of you will not return”. 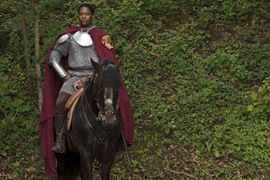 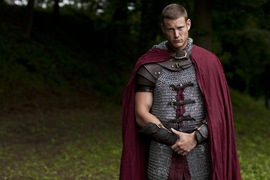 Ultimately, “The Dark Tower” rendered me grumpy and unhappy from a fan’s point of view and worried that the episode was not suitable for children at all.  As a lover of horror, I quite enjoyed the really scary parts of the episode and I was impressed with the writing in the first two-thirds of the episode.  I think there were some inconsistencies in the latter part of the episode and a lot of things just didn’t add up but I’ll have to see how future episodes play out before making a final judgement on that.