When Arthur saves a witch from execution, the dying woman gifts him the Horn of Cathbhadh, a magical instrument that has the power to summon the spirits of the dead.  As the anniversary of his coronation looms, Arthur cannot resist the urge to call his father Uther Pendragon back from the dead.  We’ve waited a full year to see the return of Anthony Head as Uther but this was no bittersweet reunion. From the outset it is clear that the ghost of Uther does not approve of the king that Arthur has become and he does not have his best interests at heart. 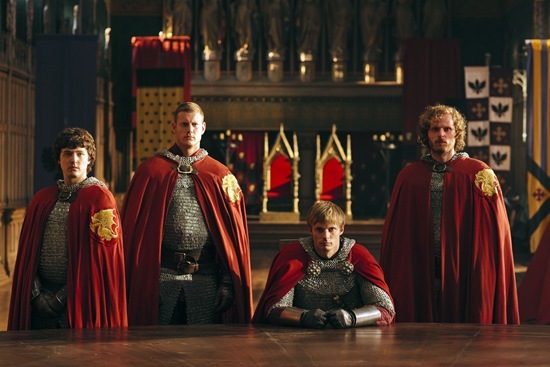 It’s All About the Love

“The Death Song of Uther Pendragon”

I loved “The Death Song of Uther Pendragon” which is hardly surprising as it was a creepy, terrifying ghost story. More than that though, I loved that this episode showed us just how far Arthur has come and why he was a better leader of Camelot. We might miss King Uther and it was very touching when he expressed his dying regret that he had put Camelot before Arthur, but the truth remains that he stood for all that was divisive and destructive to Camelot.

King Arthur – the king who is not his father

This whole episode was about Arthur, about who he is as a king and what he has become.  In the opening scenes, he shows that strength and courage in his swift action against the villagers as they move to burn the witch.  I loved when he pulled his sword on the old man and ordered him to cut the woman down.

Later in the castle, we got to witness some incredible acting from Bradley James as Arthur sits by his father’s tomb on the anniversary of his death.  He didn’t say a word and yet the emotion in that moment was almost palpable.

The scene at the Great Stones of Nemeton was horrifying.  Of course Arthur would seek to speak to his father one last time, to tell him everything he never got a chance to tell him but there is no way he could have been prepared for the ghost’s response.  He attacks Arthur’s choice of common men as Knights of Camelot, derides his practice of listening to the opinions of others and of not ruling in fear, criticises his failure to marry strategically, and mocks his choice of a serving girl as queen.  He finishes off by telling Arthur that he has failed and that the kingdom will fail.  It must be devastating for the young king who simply wanted to reach out to his father one last time.

I loved that Uther summed up his entire rule and his character in this tirade and that it reminded us once and for all why Arthur is a better ruler than he could ever be.

Of course, the biggest mistake that Arthur made was not summoning his father’s spirit, but in looking back one last time at the spirit.  The spirit is released into the world and soon appears in Camelot to wreak havoc in the castle.  There are terrifying scenes at the Round Table, in the armour room and in the corridors as Guinevere is attacked.  This was an absolute scream-fest and I loved it! 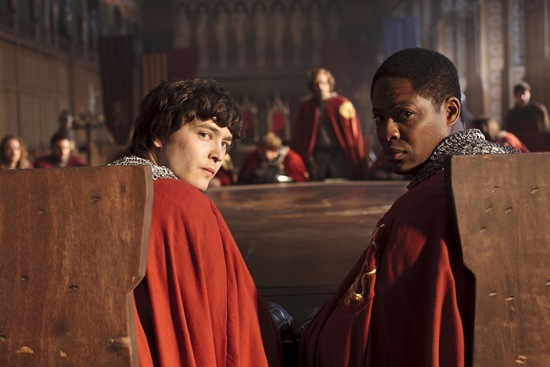 I loved the blackened ghost of Uther sitting on the throne, an evil effigy of the ruler Uther once was, hollowed out by the fear that he allowed to overcome him.  Given the chaos his actions unleashed on Camelot, his fear of sorcery and the devastation of Morgana’s betrayal, this is what I would have expected the ghost of Uther to have become, in spite of his dying proclamations.

Arthur Stands Up To Uther

Arthur finally stands up to Uther and hunts him down in the castle.  This felt really significant to me, as if it could be a turning point.  If Arthur was standing up to his father, would he question what he stood for, perhaps revise his views on magic and sorcery?

This is the king, after all, who is willing to kill his own son for Camelot.

I absolutely adored Merlin (Colin Morgan) in this episode.  The final scenes where Merlin stands defiant, ordering Uther to back off and leave Arthur alone, were simply brilliant.  I was cheering when Merlin showed Uther his power, when he stood up to him and told him that magic was always there at the heart of Camelot.  If this is a taste of how exhilarating it will be when Merlin finally exposes his power to the rest of Camelot, then I cannot wait!

Of course, Uther then attacks Merlin in a chilling scene and never before have I feared that Merlin was in this much danger.  I wonder what would have happened had Uther finished his sentence? 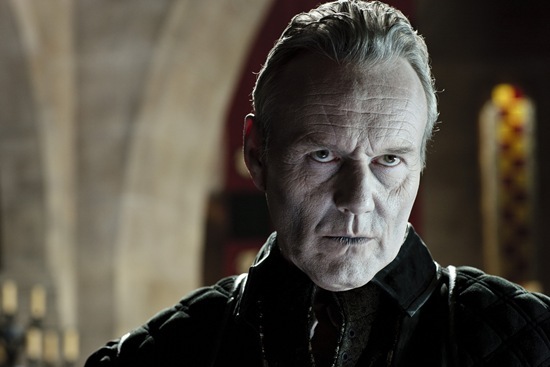 As always, I love the dialogue in Merlin and the increasing significance of what is being said.  I’ve tried not to transcribe the entire episode but here are some of my favourites.

Arthur: “What are you doing?”

Merlin: “Well, I assume we want to risk our lives and see what’s going on?”

Arthur: “It seems my father doesn’t approve of the way I’ve chosen to rule this kingdom”.

Merlin: “You mean your kingdom?”

Arthur: “I’ve always known my father could be cruel but why would he do this to Guinevere?  He knows how much I love her”.

Merlin: “You've always done what you believed to be right, even if you knew your father
would disapprove of it.  Do you not see how different you are to him?  Camelot is a better place since you became king”.

Arthur: “I know it’s you father… why are you doing this?”

Uther: “I did not spend my entire life building this kingdom to see my own son destroy it”.

Merlin: “Get away from him Uther.  You’ve caused enough harm.  You must return to the other world”.

Uther: “You have magic?”

Uther: “I made you Arthur's servant.  You are a sorcerer!”

Merlin": “Even while you were king, there was magic at the heart of Camelot”.

Uther: “I will not allow you and your kind to poison my kingdom”.

Merlin: “You're wrong. You're wrong, about so much.  Arthur is a better and more worthy
king than you ever were”.

Merlin returns at 8:20pm on 27 October 2012 with “Another's Sorrow” where Janet Montgomery will reprise her role as Princess Mithian.