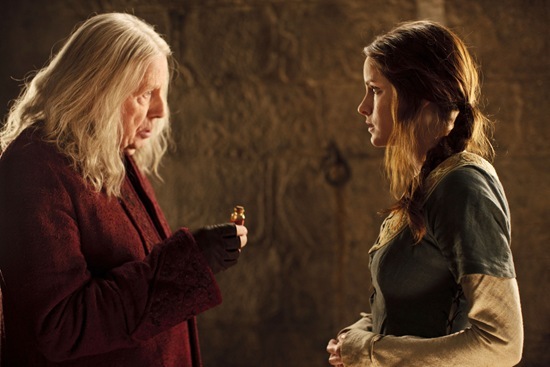 Merlin and Arthur continue across the Northern wastelands as prisoners of Ragnor and Mordred, while Sefa languishes in the dungeons of Camelot, awaiting her execution.  Morgana is certain that Arthur is making his way to Ismere and she and Ruadan intensify their efforts to find the Diamair, the Key to all Knowledge.  Morgana must learn the nature of Arthur’s bane is so that she can destroy him once and for all.  Meanwhile, Merlin is on high alert as he fights to save Arthur from his certain fate at the hands of a druid.

It is hard to believe that I felt so underwhelmed after the opening episode of Merlin last week, for last night’s episode “Arthur’s Bane – Part 2” was just incredible.  I loved nearly everything about it and had very few complaints.

There are a lot of spoilers in this post, especially seeing as I feel the need to discuss the ending so please don’t read further unless you’ve seen it.

It has been a long time since I loved anything about Morgana (Katie McGrath) in a Merlin episode and it is hard to believe that she was once one of my favourite characters.  Still, what I loved most about this episode was what happened to her and her ultimate fate.

I loved Morgana’s dream about her and Aithusa trapped at the bottom of the well. I like the idea that she will soon meet a fate of her own making. 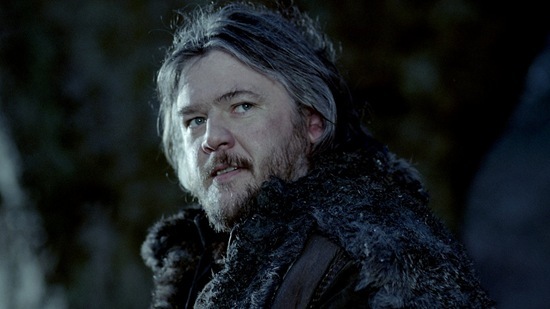 The scene when Morgana laid eyes on Mordred across the courtyard was brilliant.  I loved that she recognised Mordred straight away, unlike Arthur and Merlin, and the death stare that she gave Ragnor (Stephen McCole) to silence him was priceless.

Liam Cunningham was just fantastic as Ruadan and I really do think I like him a lot.  Here’s some trivia for you, did you know he played Agravaine in the 1995 film First Knight? 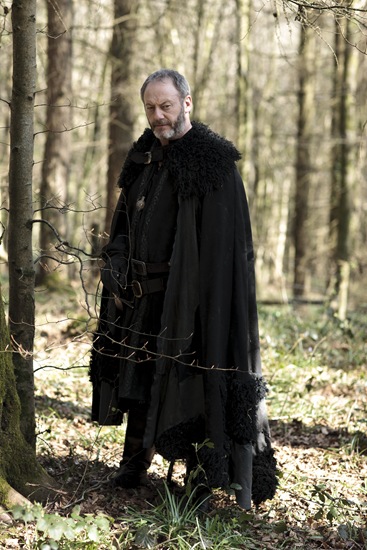 I loved that Ruadan did not like Morgana’s flippant treatment of his daughter’s impending death but was surprised that he did not do more to sabotage her efforts after that.  As my interest in Ruadan became less objective and more amorous, I loved the scenes of him looking determined and mysterious as he steals into Camelot to rescue Sefa.

It was natural then that I was heartbroken when he was fatally injured.  What enemy have we made of Sefa (Sophie Rundel) now?

I know, we’re meant to call her Gwen but that was never a moniker that resonated especially well with me, especially now that she is queen.  At first I was really unhappy that noble, honourable Guinevere (Angel Coulby) had upheld Sefa’s death sentence, especially following Sefa’s impassioned plea for mercy. 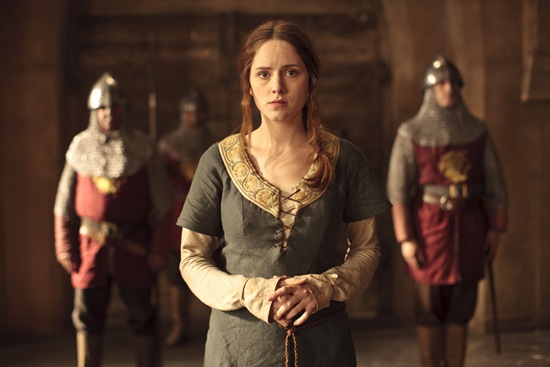 I need not have doubted her though as Guinevere then admitted to Gaius that she had no intention whatsoever of killing Sefa, that she was merely hoping to trap Ruadan, and I loved her all over again.

It seems that our young queen must learn that with great power comes great responsibility because Sefa will never know of Guinevere’s true intentions and I believe she will make a powerful adversary in the future.

I initially liked the scene with Morgana and Aithusa in the well but shortly thereafter, I had to question what had happened to our young hatchling.  I knew that Aithusa had taken to the dark side but why is she looking so ill and weak?  Well, I was not the only one to notice it.

I adored the scene with Merlin the Dragonlord and Aithusa where Merlin repels her fire and commands her to obey him.  Merlin is just incredible and so absolutely powerful.  It was heartbreaking when he realised that Aithusa cannot speak and when he commanded her to leave for her own safety.  Has Morgana enchanted her, enslaved her?  Surely the dragon has something to say, something that Morgana is very afraid of?

I don’t trust Mordred (Alexander Vlahos) which is probably just as well because he has been named for over a thousand years as the traitor who kills Arthur at Camlann.  That is his fate but we have to remember that one of the central themes in both Arthurian legend and Merlin is that of becoming.  Is that where we are? Is Mordred not yet corrupted when he shows kindness to Merlin, when he assures him that his secret (of sorcery) is safe with him?  I’m not sure because that little boy seemed pretty angry when Uther killed all of the druids, despite his claims that he owes Arthur a debt of gratitude for sparing his life. 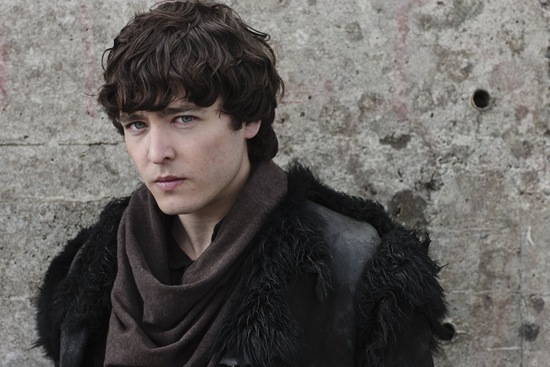 I loved that Arthur spared his life again, lowering his cross bow as they faced each other across the ravine.  I loved that this meant that Mordred owed Arthur yet another debt of gratitude and that this made Merlin so unhappy.

I absolutely was not expecting Mordred to stab Morgana in the back.  It was thrilling as was not knowing for some time whether Morgana had survived or not.  I loved this scene and I loved that Morgana was finally dealt a pretty hefty blow by someone she trusted.  Not everyone stands by her vision of the future.

I honestly don’t know what to think of Mordred becoming a knight.  I guess we will have to wait and see whether he will be the arch nemesis in this season.

I love the mutual fascination when Merlin and the Diamair (Josette Simon) first meet, as if they both know and intrinsically understand the significance of the other.  I think I always love it when powerful and magical beings meet Emrys because they know what few people in Camelot know.  They give Merlin the recognition, awe and respect that he deserves.  I live for the day when Merlin’s status is universally recognised.

And how incredible that Arthur is his own bane?  What is he becoming and will his final undoing be one of honour, or an ending built upon arrogance and failure?  I think the former, that he will learn to love and trust but that it will not be enough.

The Knights of Camelot

I can’t go without mentioning the fabulous knights of Camelot.  I loved it when Sir Gwain (Eoin Macken) vowed to protect the Diamair.  The true hero of this episode was Sir Percival and his acts of sabotage and sedition.  Can I just make a gentle suggestion that we lose the knights’ robes and keep them shirtless at all times in future?  It just seemed to really work for me. 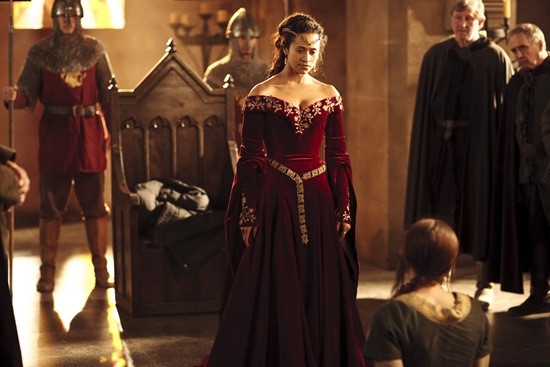 This episode had some powerful scenes with amazing dialogue.  These are just some of my favourites:

Mordred: “You fear me Emrys, don’t you? I know the hatred and suspicion with which men treat those with magic. You and I are not so different.  I too have learned to hide my gifts.  I promise, your secret is safe with me”.

Euchdag: “You think kindness is the preserve of humans?”

Morgana: “I’m a high priestess.  I hold the power of the heavens in my hands and yet he continues to defy me.  I want his annihilation, Mordred.  I want to put his head on a spike.  I want to watch as the crows feast on his eyes”.

Morgana: “You’re right to cower before my hand.  I’m more powerful than you can ever imagine”.

Arthur:  “And yet with all that, you choose to do nothing but hate”.

Euchdag: “Much blood has been shed this day and all for something few wise men would ever want”.

Merlin: “You mean the Diamair”

Euchdag: “And she never will”.

Merlin: “Because it is you”.

Merlin: “You are the key to all knowledge.  There are times when I feel the weight of my destiny crushing me but that is nothing to what you carry”.

Mordred: “The love that binds us is more important than the power we wield.  Morgana had forgotten that”. 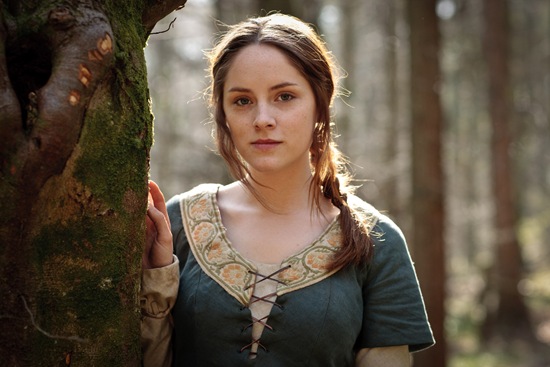 I loved this episode for the most part but apart from Morgana still being alive, I only had one real complaint.  Something is missing when it comes to Arthur, his general air of excellence seems to be lacking.  This is the man who released the sword from the stone, the worthy man who wields Excalibur and yet the writers seems to have taken us back two seasons with his general behaviour and attitude towards Merlin.  The dynamic between Arthur and Merlin seems to have regressed somewhat and I just wish we could see Arthur begin to suspect that he is wrong about Merlin (and I don’t mean discovering he can juggle either).

BBC Merlin returns on Saturday, 20 October at 8.25pm with “The Death Song of Uther Pendragon”.  I’m so thrilled about the return of Anthony Head as King Uther!