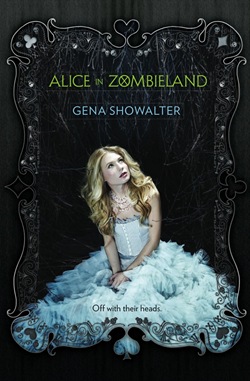 Alice Bell has never experienced what you’d call a normal life. Her whole life her family was held captive by her father’s paranoid ramblings about monsters, never allowed to go out at night and living in a highly secure but permanent state of fear. Except that he wasn’t delusional and monsters are real. It is bad enough that Alice loses her entire family in a car accident on her sixteenth birthday but on that evening she finally sees the monsters with her own eyes and she realises once and for all that her father was anything but crazy.

Alice in Zombieland is Gena Showalter’s latest foray into young adult fiction, following on from her as-yet-unfinished Intertwined series. Despite the play on the title of the Lewis Carroll classic, the book has little to do with Alice in Wonderland and it is not a reimagining of that story. In a sense, this might be misleading to readers as the front cover proclaims “Off with their heads” and the series is called The White Rabbit Chronicles but apart from Alice’s sightings of a white cloud in the shape of a rabbit, further references to Alice in Wonderland are extremely tenuous.

This suited me perfectly as there is a time and place for parody mashups but I think Gena Showalter is a better writer than that.  However, therein lies the problem with Alice in Zombieland.  It is probably worth mentioning that I am a great fan of Showalter’s Intertwined series to the extent that it is the first series in years that I have read several times.  The supernatural world that Showalter created in those books along with her characters’ natures and abilities was incredibly entertaining, unique and interesting. It is safe to say that I had high expectations of her with this book.

Ultimately, Alice in Zombieland is just an average high school melodrama with stereotyped characters and a zombie threat. Except that the zombies aren’t zombies, they are ghosts, despite the fact that the author insists on more than one occasion that ghosts don’t exist.  And, of course, the zombie ghosts can bite you and infect you which actually makes them zombies. I think I’ve conveyed how silly the distinction is.

There were so many scenes that reminded me of other books, films and television programs that little seemed original in this book.  The scene where Alice first sees Cole seemed almost identical to the scene where Bella first sees the Cullens in Twilight; the organisation of the hunters in relation to their parents seemed like a cross between Teen Wolf and Secret Circle; and the characterisation of Cole and his friends (and the subsequent reversal of that impression) felt like it came straight out of Fallen.

My honest impression (and I might be entirely mistaken in this) was that Harlequin Teen had far too much editorial input into the novel and encouraged Showalter to write a book that they could sell. This was supported by Alice reading another Harlequin Teen novel in the book (product placement anybody?) and the fact that Showalter’s characters are now shiny and squeaky clean with no cursing or carnal bodily relations.

So if you were expecting a Lewis Carroll / zombie mashup or a paranormal thriller of the same calibre as Showalter’s Intertwined series, then Alice in Zombieland is probably not the book for you.  However, if teen romances with a touch of the supernatural are what you are looking for, then his book performs fairly on that level.  I give it a fair 2.5 out of 5 stars.

Alice in Zombieland is published by Mira Ink and is available to purchase on Amazon.co.uk or Amazon.com.