1975. Alfie Kirby (James Lance) is walking along the street with a little boy, teaching him the Green Cross Code.  He fails, spectacularly.  Well, I guess that depends on how you look at it.  Maybe watching Kirby get rear-ended by a car at 60mph prevented the little boy from breaching the rules of the road ever again.

Barry, present day.  Annie (Lenora Crichlow) is driving Tom and Hal up the wall with the illustrated rota she has drawn up for Eve's care. Hal tries his best to explain that he already has an obsessive schedule, necessary in order for him to stay on the wagon, but Annie doesn’t care.

The doorbell rings and in walks Creepy Kirby.  He is a ghost and he says that Nina has sent him from the other side but no one with hair that bad could ever be trusted.  Annie wants to know why Nina didn’t come herself but Creepy Kirby scoffs, werewolves can’t be ghosts, that really wouldn’t make sense! 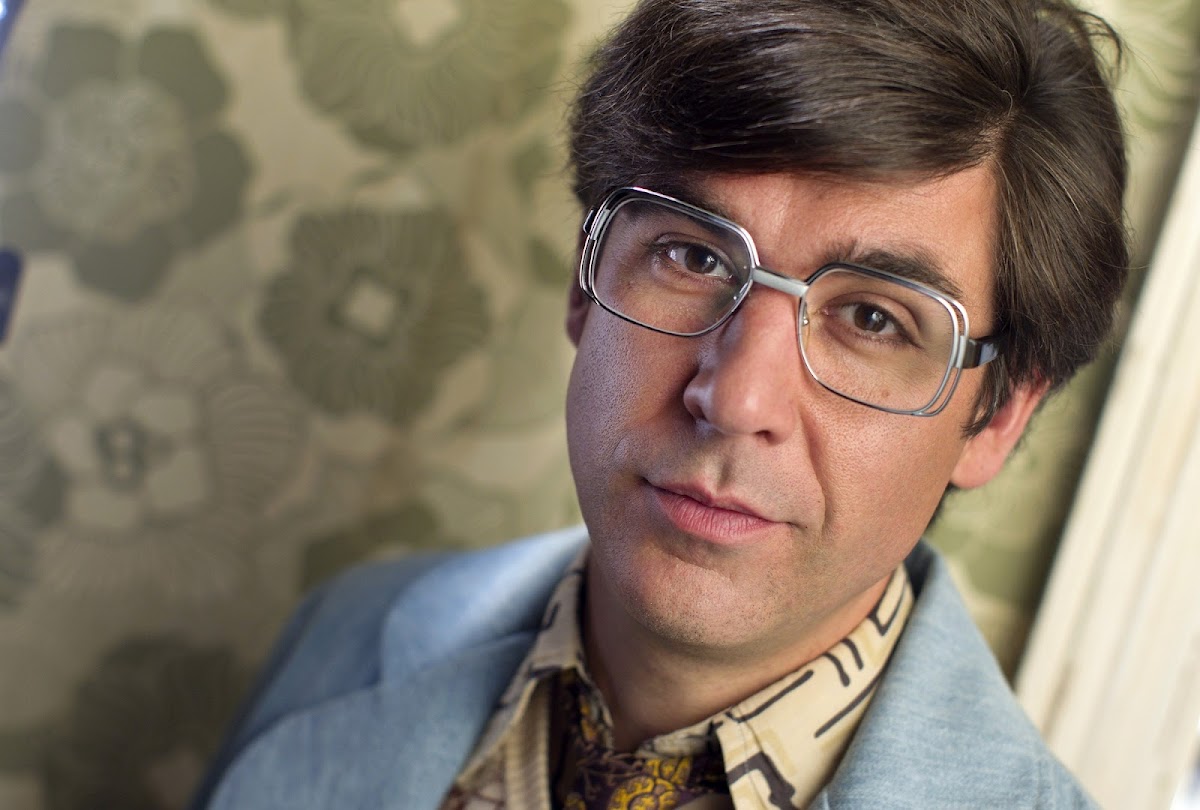 Creepy Kirby does everything in his power to generate dissent in the household.  He moves in as close as he can get to a stressed and exhausted Annie, plants seeds of doubt in her mind about Hal (Damien Molony) and superbly plays up Tom’s insecurities and doubts.  In short, he is a nasty piece of work with an even nastier fashion sense.  The strangest thing of all is how desperate he is to get close to Eve.

Despite the thrill of seeing Hal in an apron in “The Graveyard Shift”, trying to chat up the clueless Michaela, last week’s episodes wasn’t one of my favourites.  “A Spectre Calls” sees Being Human right back on form though and I really enjoyed it.  Of course, I might simply be biased after seeing Hal shirtless, performing push ups, Hal in a tank top and Hal crying.

Yes, crying.  Because Creepy Kirby really is a nasty piece of work and he knows all about Hal and the lives that he destroyed.  He knows just what a monster Hal really was and he threatens to tell Annie all about it.

And then there is Tom.  He never grew up with the luxury of a loving family, living on the run as he did with McNair.  It is his 21st birthday and he has never even had a birthday cake before.  But don’t worry, Creepy Kirby is there to really rub it in.

Spoiler warning: do not read further if you have not seen Being Human – “A Spectre Calls” 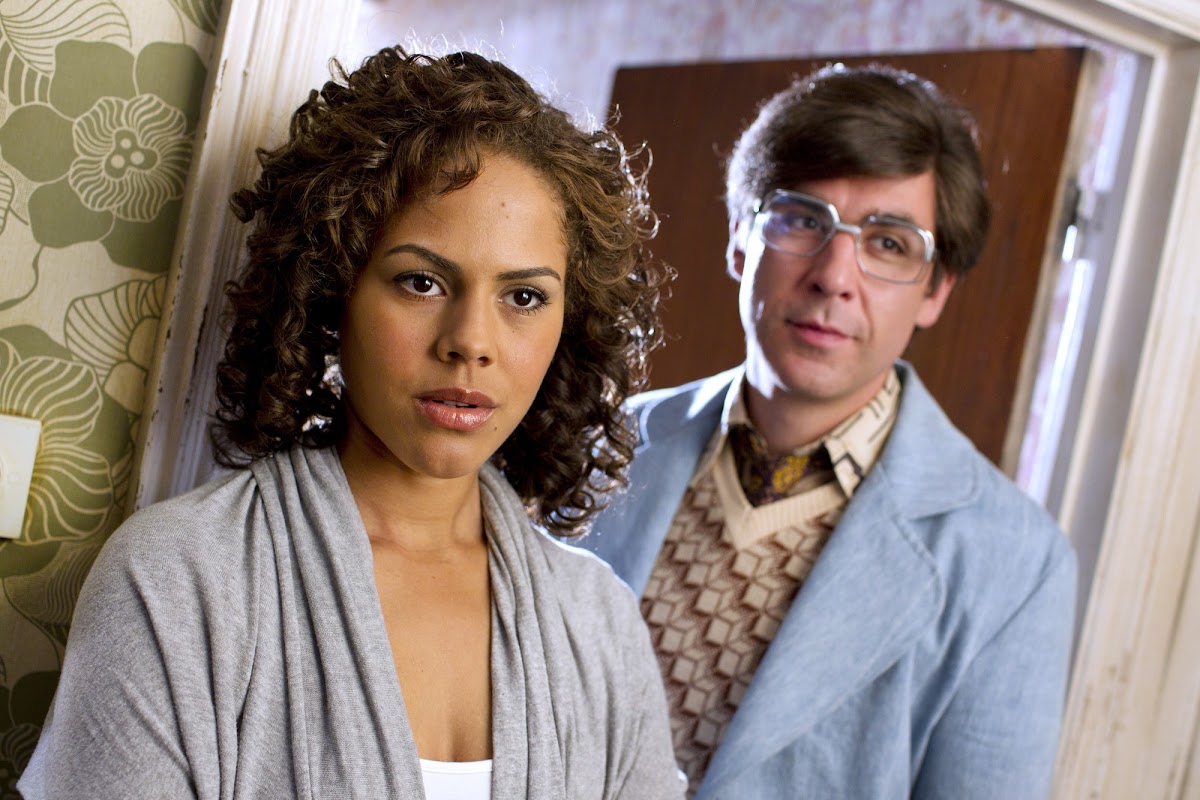 Kirby succeeds and soon both Hal and Tom are alienated in their own home.  Tom storms out after a fight with Hal, leaving to celebrate his 21st birthday in true British binge-drinking style.  Kirby manages to provoke Hal right up to the point where he loses control and Annie sees him as a threat to Eve and kicks him out.  We finally see the return of the ambitious vampire-yuppie Cutler (Andrew Gower) when he poses as a lawyer (what else could a vampire-yuppie pose as?) and gets Tom out of jail.  He almost convinces Tom that he can trust him but he most certainly cannot!

Damien Molony was incredible in this episode.  His range of acting is impressive but I am really looking forward to him losing his temper in the very near future.  No one can repress that much rage and violence without a major meltdown occurring.

Talking about meltdowns, Annie went all Rose Tyler / Bad Wolf in this episode and it was freaking amazing.  Seriously, look at this: 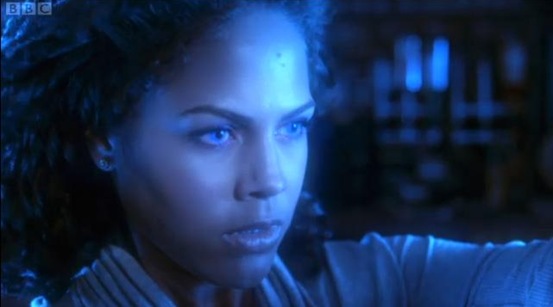 The star of “A Spectre Calls” was James Lance (and the writers and wardrobe designers).  The Toy Man storyline was horrific, as was Kirby’s happy dancing to “Barbara Streisand” towards the end of the episode.  Creepy Kirby was really well written and had a fabulous dialogue.  Kudos to James Lance for pulling it off so well.

Kirby: “Evil is like travelling first class.  Try it once and you can never go back”.

So who do you think The Woman (Gina Bramhill) in the television screen is, the one we met in “Eve of the War” from the year 2037?  I remain as convinced as ever that she is Eve, determined to end her own life to avoid the final fall to the vampires that we saw in 2037.  I think the biggest clue is how sad she was when she thought Annie was gone.  This is a girl who would have been brought up by Annie, after all.

And what do you think about Hal’s burnt arm?  Has he become the evil foe predicted by the prophecy and will Tom’s blood eventually kill him?

I guess we’ll have to wait until next Sunday for “Hold the Front Page”.