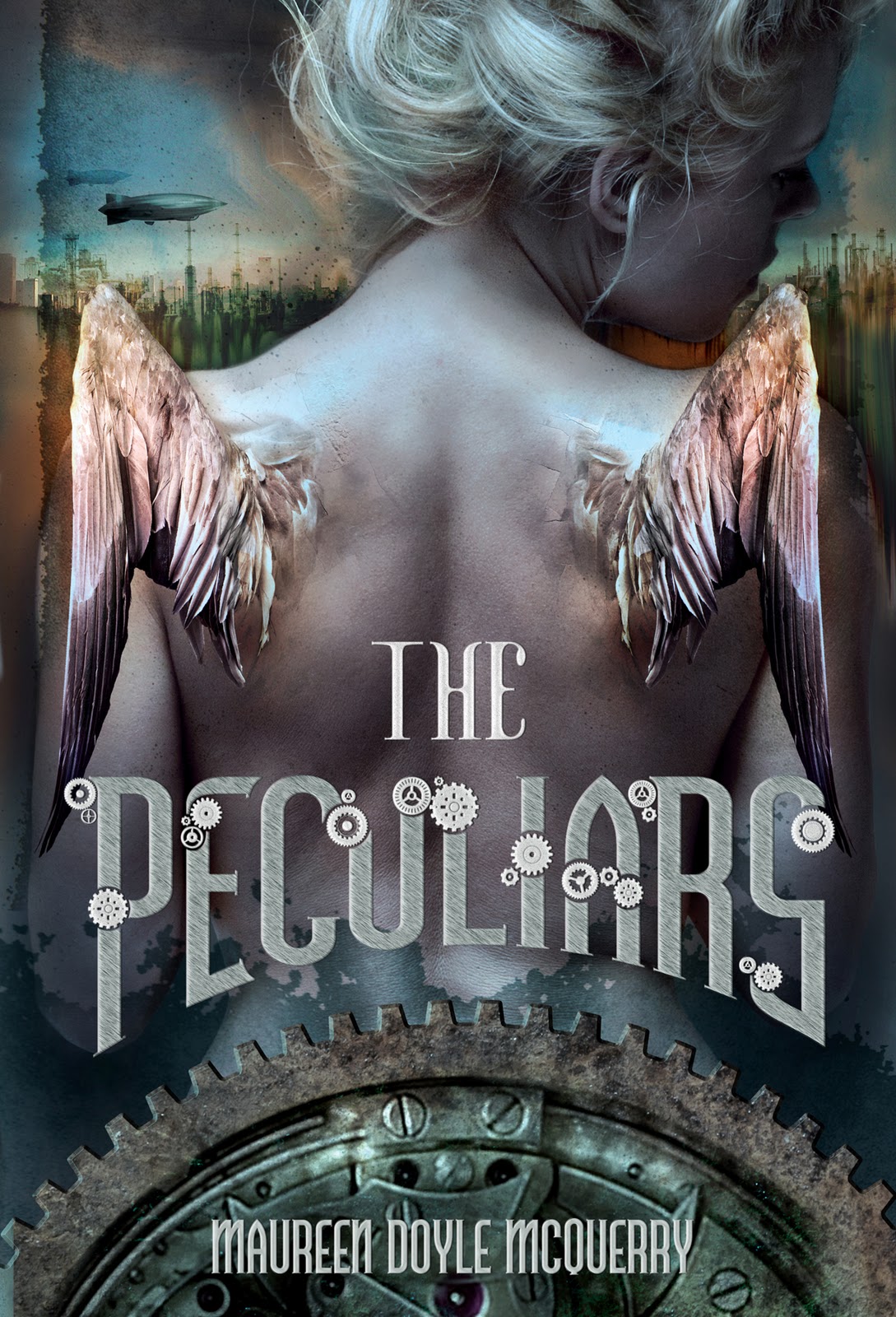 There is something really priceless in choosing a novel on a whim and then realising you have discovered an absolute gem.  I was fortunate enough to have this experience recently when I picked up The Peculiars by Maureen Doyle McQuerry.  The Peculiars is a young adult, steampunk fantasy set in an alternative America in the late 1800s.  If you like steam engines, Victorian-era fashions and wild and wonderful inventions, then you are going to love this fantastical adventure.

On her 18th birthday, Lena Mattacascar receives a small inheritance and an envelope from her father Saul.  She has not seen her father since he left for the northern wilderness of Scree, a land filled with Peculiars and other undesirables, when she was merely a child.  She decides to leave her mother and grandmother in the City and travel alone by train to Knob Knoster (on the border of Scree), a practice almost unheard of amongst well-bred young ladies.  Then again, Lena’s Nana Crane always warned her of her father’s goblin blood and the wild traits that she would inherit.

Lena has endured a lifetime of stares and mutters and has kept her very long hands and feet well gloved and booted as a result.  Cautious to avoid any unwanted attention, she tries all she can to dissuade young Jimson Quiggley from keeping her company when she meets him on the train to Knob Knoster.  Her discomfort is soon forgotten when there is an armed robbery on the train and her purse goes missing in the chaos.  What was to be a short stopover in Knoster while she secured a guide into Scree becomes an exercise in raising the funds she lost on the train.

Lena is soon charmed by the handsome lawman and marshal Thomas Saltre, who seems quite interested in everything she has to say and in her journey to Scree.  Assured that he is the best guide she could possibly find into Scree, Lena makes her way to the home of inventor Tobias Beasley where she runs into Jimson Quiggley again.  She secures work at Beasley's library while she tries to recoup her missing money and seems only too pleased to pass on information to marshal Saltre when she begins to notice strange happenings at the house.

Nothing is as simple as it seems though and Lena makes a significant error in judgement that puts all of the wrong people in danger.  What follows is a chase across air and land in an era where air travel was only beginning to be dreamed of.  We encounter goblins and people with wings; flying coaches, dirigibles and unscrupulous lawmen; indentured Peculiar labourers and precious Titantum mines; and all the while, Lena embarks on a journey that teaches her loyalty, integrity and the value of friendship.

McQuerry imparts an incredible amount of detail without weighing the story down.  She creates such a vivid impression that I could almost feel the stiff fabric of the Victorian clothing and the discomfort Lena experienced as she tried to fit her long, spidery hands and feet (each with additional joints on her fingers and toes) into formal gloves and boots. I could imagine the textures of the material and started to appreciate how many layers and accessories were required in proper Victorian attire.  McQuerry’s writing appealed to other senses too as I could almost smell the soup in the kitchen and feel the cold, wind and steam as they cascaded through the air in the coach.

McQuerry has created a wonderful world with The Peculiars and I will certainly be looking out for her work in the future.  In fact, I enjoyed this book so much that I would investigate other works in the streampunk genre in future.  The Peculiars will be released on Amazon.com and Amazon.co.uk on May 1, 2012.

I give The Peculiars five out of five stars.