Book Review: If I Die by Rachel Vincent 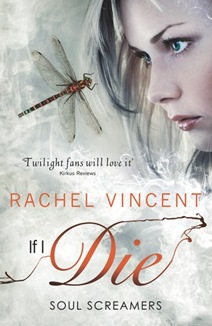 Fans of Rachel Vincent’s fantastic young adult Soul Screamers series always knew that bean sidhe Kaylee Cavanaugh was living on borrowed time.  When she was three years old, Kaylee died in a car accident but her distraught father pleaded with the reaper to save the life of his daughter and take him instead.  Of course, everyone knows that reapers have a rather warped sense of humour so the reaper spared Kaylee’s life but took her mother in exchange.

Since then, the young bean sidhe (banshee) has been living her mother’s timeline while she wrestled souls from demons, supported her Demon’s Breath-addicted bean sidhe boyfriend Nash, and came to terms with her need to scream blue murder every time someone in her vicinity dies.  Such is the life of a bean sidhe (or banshee as you probably know them).

Now her time is up.  Nash’s dead reaper brother Tod breaks the news that Kaylee’s name has appeared on his list and reaper rules are pretty clear about second extensions – there are none.

With just days to live, Kaylee tries everything in her power to get her father and Nash to accept her fate and not interfere or mess with the reaper.  Meanwhile, she realises that something is not quite right with the new math teacher, Mr Beck.  With the help of Nash’s mara girlfriend, Kaylee soon figures out that that Beck is an incubus, an energy-sucking lust-demon.  Can she save the school from this deadly Netherworld creature before time truly runs out?

If I Die is the fifth novel in Rachel Vincent’s Soul Screamers series featuring bean sidhes Kaylee and Nash and a host of supernatural creatures including hellions, maras, reapers, incubi and even the occasional human being.  What will thrill fans most about this instalment is not the fact that Kaylee is dying or that she is once again fighting evil, but the massive twist in the love relationship between her and Nash.  I am not going to spoil it by saying what the twist was, I’m not even going to hint, but let’s just say that I spent most of the book thrilled, a short portion devastated and then I was absolutely happy in the end.

In fact, I liked almost everything in this book.  I love that Tod got a much bigger part in this story and I have to say that I knew all along, ever since his eyes started churning two books ago.  Cryptic, I know, but it is hard to wax lyrical about something so integral to the plot without spoiling and ruining it for other readers and it certainly would have spoiled it for me if I’d had even a clue of what was in store.

There were a couple of things I did not like about this book but that had more to do with character development than any fault of the author, Rachel Vincent.  Nash has always been clueless and self-centred and this book was no exception, his ex-girlfriend Sabine (the mara or living nightmare) is pointlessly irritating and nasty, and Kaylee’s cousin Sophie is still as jealous, insecure and immature as ever.

On the other hand, Kaylee is a fantastic heroine and is miles ahead of the frightened, confused girl we met in My Soul to Take.  She is determined and displays integrity, maturity and skill in controlling her bean sidhe abilities.  Once again, Rachel Vincent exceeds herself in the description of the Netherworld and of the supernatural creatures that bleed into our reality.

She builds on the Soul Screamers novellas and winds up the story of Kaylee’s stay in the secure psychiatric unit in My Soul to Lose and that of Tod’s death and the sacrifice he made in Reaper.  I would absolutely recommend that you read the novellas before reading this book as they add to the story and complete the experience.

I have no hesitation in giving If I Die five out of five stars and no matter how different circumstances now are, I look forward to the next book in the Soul Screamers series, Before I Wake.

Buy If I Die from Amazon.co.uk or Amazon.com.