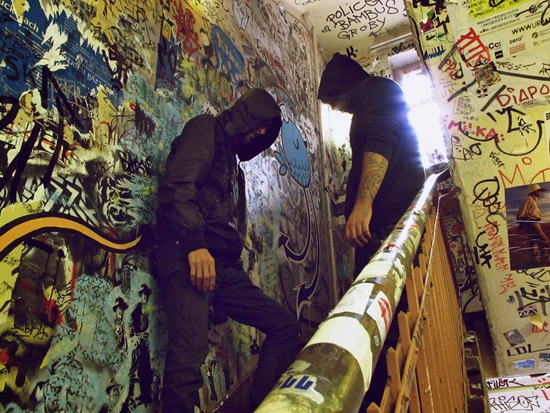 Earlier in the month, we brought you the news that Spanish duo The Suicide of Western Culture were releasing their new album Remixes and offering a free download of “This Is The Last Time I Shake Your Hand”.  I caught up with them to discuss the best summer festivals, the meaning of their name and their upcoming tour.  By the end of the interview I wasn’t surprised that the secretive duo never did tell me their names!

First, can you tell me a bit about who you are and how you met?

We're two guys from the Barcelona outskirts. In our place most of the people spend their time with car tuning, dog fighting, watching football games in the bar... Those who make different things we know each other.

When did you realise you wanted to record music together?

There was some affinity. Our idea was 'do not dump it, we'll try to make a song'. 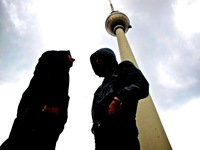 I love your name, The Suicide of Western Culture. Can you tell me about why you chose that name and what it means?

I was in a club. Glowing lights, house music, drugs, girls shaking their asses... I was lucid for a second and I thought that Europe was lost.

Can you tell me about your song-writing process and how you go about recording tracks?

It's a 2-step process. First, we work with the machines, just machines. We don't like software, we just love touching what we use, knobs, keys and so. We work with them to get the sounds we like. Then, we sequence them to make our songs. It's always fast. We don't spend too many time with one song. Whenever we find something exciting we just go for it.

What are your worst habits when it comes to your music?

We're not perfectionists. We're very messy and chaotic. But that might be something good, actually.

Where do you gain your inspiration for your music? Are your tracks snapshots of moments, events and emotions or do you try to convey deeper meaning.

That's it! We get inspired by films, commercials, something that might happen at a train station, a landscape, a moment, something we hate or something we love.

My favourite track is from your debut album and is "The End of Luxury". Can you tell me a bit more about the track?

It just came up swiftly, as any other song. In this case, we think we're not in a global crisis situation, but in some kind of twist. Everything is going to change. Nothing will be as it was before. Inequality would increase in the West and I don't think we'll get the newest iPhone every year. They'll have to make better batteries. 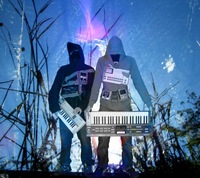 You played a series of festivals this summer. What was your absolute favourite festival moment this summer?

We have very good memories of all of them. No bad experience at all. Well, the police stopped a couple of our gigs because of the volume and then we got fined after a summer festival. If I have to chose a concert, I'd say the one at Frannz Club at the Berlin Music Week. It was great.

What is the best venue to play?

It seems that in Central and Northern Europe they do care about the sound and the stage conditions.

Which festival has the best crowd?

We're not a band for the masses and the people that come to see us is very devoted. They know what they're going to see. You find good crowds everywhere - some are quieter, others are louder, but they're always great.

Which festival would you like to play at that you haven't played at yet?

Can you tell me a bit more about your plans to tour the United States? Where do you want to play and what do you want do see while you're there?

We'll be playing at SXSW festival as much as we can. Then we'll tour in small venues. We'll work hard! 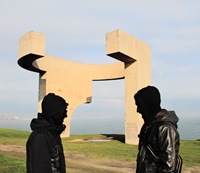 Are you currently working on new material?

We're working on the sounds, recording and playing around with our Casio keyboards, drum machines and some second hand synths we recently bought. Everything will be transferred into our MPC units and we'll spend a couple of days in Berlin recording album 2 in a Berlin hostel. That's our formula. No producers, no studios.

What do you do when you're not recording, practicing or performing? Are you at the stage where your music is supporting you?

Drinking beer at our local bar, walking the dog, taking photographs, cooking paellas, working... At the current time, we feel the need of making music. If not, it would be like being dead.

Do you have any upcoming tour dates?

We'll shortly announce some dates in Spain, Europe and then in the US for 2012.

Thank you for a killer interview! I hope to catch you on the festival circuit this summer.