Book review: When You Reach Me by Rebecca Stead 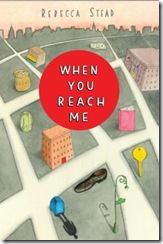 Have you ever reached the end of a book and enjoyed it so much that you simply wanted to start over again? That was my experience on finishing Rebecca Stead's remarkable novel When You Reach Me. Not only was it so good that I didn’t want the story to end, this is also a book where the end is the beginning and time is simply circular.

When You Reach Me is a short children's book aimed at readers aged twelve and over. It is set in New York City in the 1970s and features sixth grader Miranda whose life has recently started to fall apart. At the heart of the novel is a sequence of unsettling and puzzling events that change Miranda's perception of the world around her. Miranda's best friend Sal is punched in the face by another kid for no apparent reason and he subsequently shuts her out of his life. In addition, Miranda begins to receive strange notes and the secret key that Miranda’s mother keeps hidden for emergencies is stolen.

As the reader begins to piece together the puzzle that makes up the story, Miranda makes new friends and she builds upon her obsession with the time-travelling novel A Wrinkle in Time . As the notes increasingly include information that the writer should not possibly know, Miranda comes to believe that only she can prevent a tragic death.  That is until the last note has her believing that she is too late.

When You Reach Me is a New York Times best seller and the winner of the John Newbery Award 2010 plus a host of other awards. I could not find any fault in this book whatsoever and enjoyed it immensely. I especially appreciated the depiction of New York City in the 1970s with its apartment blocks, community schools and the emerging socio-political awareness of everyday citizens. Although it is short at 203 pages, this is a powerful coming-of-age story that addresses several important themes and issues while remaining fun and enjoyable to read.

With its subtle approach to friendship, growing up, social justice, racism and stereotyping, this is a perfect book to prescribe to young children, both boys and girls but I would heartily recommend it adults too. Like A Wrinkle in Time which provides so much of the inspiration for this story, I can imagine that this book could become a firm favourite with young readers and one that they will want to read again and again.  I give this novel five out of five stars and will certainly be seeking out other works by Rebecca Stead.

Buy When You Reach me at Amazon.co.uk

Article first published as Book Review: When You Reach Me by Rebecca Stead on Blogcritics.