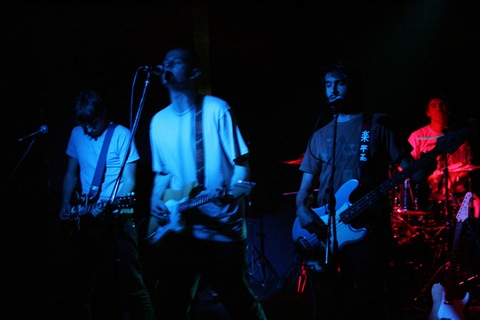 Hailing from Sydney, Australia, The Sleep-Ins are Chad Corley (guitar and vocals), Stefan Pope (bass and vocals), Josh Shuberth (drums) and Mike Johnson (guitar).  Chad met Stefan when he applied for a job at a Sydney guitar shop and they starting jamming together with Josh and later Mike, fellow employees.  As they defined their sound and began to gig together, they had to hide from their employers the fact that they were in a band together.

Says Josh, "we had to be careful about the guitar shop owners not knowing four of their employees were in the same band...it gets quite suspicious when we all show up for work a bit dreary-eyed because we were out late gigging the night before; but we all knew what we wanted to do, so it's no surprise we got right to it."

The Sleep-Ins released their debut album Songs About Girls & Outer Space on October 19 and in the course of touring for the past year or so, they have written enough songs for a follow-up album too.  With tours across Australia and airplay on Australian and American radio stations, this is a band whose star is rapidly rising and they are proud to report that they no longer work in the guitar shop although they do visit from time to time!

To celebrate the release of their debut album, The Sleep-Ins are offering two of their singles for download:

You can listen to the songs below, too:

They really sound like Pixies!  I wonder if they don’t sound too much like them.  I definitely prefer “Silver State”.

Buy The Sleep-Ins at Amazon.co.uk ¦ Amazon.com