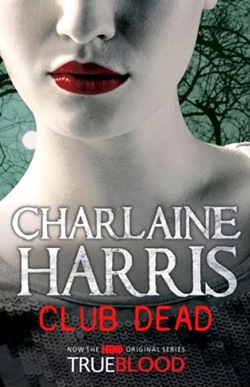 I'm a little peculiar when it comes to books. I value them so highly that I barely crease the spines when I read a novel and books often retain their brand new look once I've finished with them. Perhaps that is a sign of how much I enjoyed Club Dead, of how I devoured it, that it has several deep creases up the spine. It is positively mangled compared to the other books in my collection and I don't really care, I simply enjoyed it that much.

Club Dead is the third novel in Charlaine Harris's phenomenally successful The Southern Vampire Mysteries series. Set just weeks after the events of Living Dead in Dallas, Club Dead begins with Bill giving Sookie instructions on what to do should anything happen to him. He had been doing a lot of work on his computer lately, a device which this 163-year-old vampire is strangely more comfortable with than our 28-year-old heroine and it is what is on his computer that is of utmost concern should he go missing.

Shortly thereafter, Bill leaves for a business trip for 'Seattle' but our telepathic heroine doesn't need to read his mind to know that he is lying. At that, Bill departs from an active role in the story for the next 180 pages. What a relief! The next thing Sookie is attacked by a Werewolf and Pam is telling Sookie that Bill is missing and that Eric wants her to go to Jackson, Mississippi to look for him.

The story in Club Dead is quite simple really. Sookie departs for Jackson with a Werewolf named Alcide Herveaux and they spend just two nights there.  Most of the story is based on that very eventful 48 hours but it is so well written that I raced through it.

As with Living Dead in Dallas, there are loads of new characters and Alcide is certainly my favourite. His earnest, sincere affection for Sookie (interspersed with feelings of lust, naturally) was the first indication for me that I really wasn't missing Bill at all. There were other characters too include the King of Mississippi, Russell Edgington and his lover Talbot, Alcide's ex-girlfriend Debbie Pelt and his sister Janice.

There were also goblins, several stakings, vampires, Weres and shifters, a full moon and of course, Elvis.  Eric plays a much greater role in this story and as we discover what Bill was actually doing in Jackson in the first place and given what he does to Sookie at the end of the book, I finally understand why so many fans hate Bill and love Eric.  Personally, I have always rather fancied Sookie’s boos, Sam and I missed him in this book although Alcide was a more than worthy replacement.  The tension building between Sookie and Alcide was really well done and kept me turning pages until late into the night.

I’ve always quite liked both the books of the The Southern Vampire Mysteries and the television series True Blood but seem to have confused myself in the past by trying to consume the two simultaneously.  Having made the decision to press ahead with the books, I found this to be the best book yet and I can see that the series is really gaining momentum.  I lasted a full day before caving in and picking up the next book in the series, Dead to the World.  I can feel that I am at the point where I move from being a casual reader of a series to a full blown fan and I am happy to give Club Dead five out of five stars.

Article first published by me as Book Review: Club Dead by Charlaine Harris on Blogcritics.