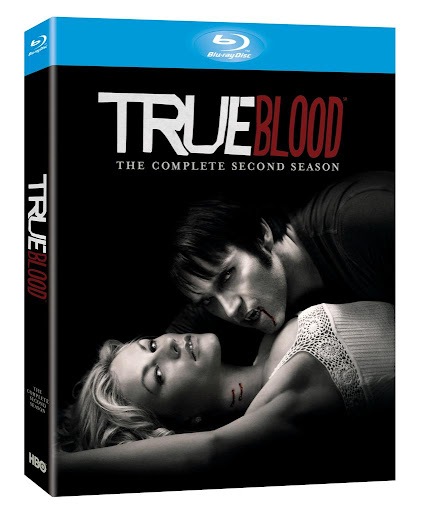 Writing a review about HBO’s massive vampire series True Blood is an incredibly daunting task.  True Blood is based on Charlaine Harris’s The Southern Vampire Mysteries and there is huge fan investment in both the television series and books.  The show is larger than life and is an ostentatious display of sex, mayhem and drama; can a single review ever capture something as big as the Sookie Stackhouse phenomenon?  Having watched the visual feast that is the second season of True Blood on Blu-ray, I shall certainly try.

True Blood centres around a telepathic waitress called Sookie Stackhouse who falls in love with a vampire called Bill Compton.  With the invention of synthetic blood, vampires have been able to “come out of the coffin” as they no longer need to prey on humans for sustenance.  The series is set in Southern town of Bon Temps, Louisiana.  In the first season of True Blood, Sookie met Bill and soon fell for him once she realized that his thoughts were silent to her; his silence is a rare treat for her in a world filled by the cacophony of other people’s thoughts. 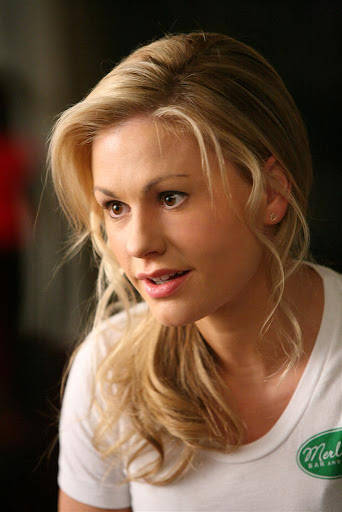 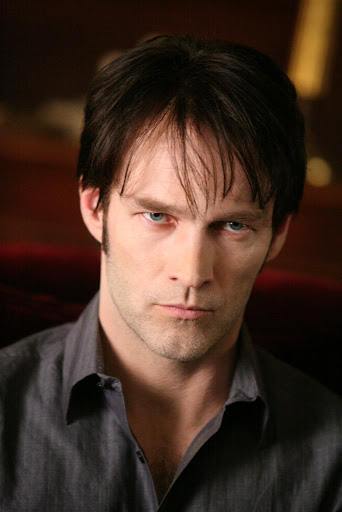 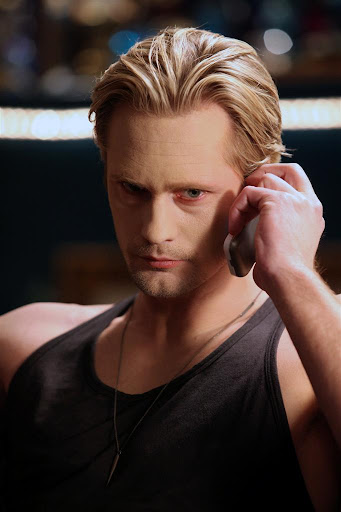 The second season of True Blood focuses on two major plotlines and the series begins to depart quite dramatically from the books.  Although this season is loosely based on Charlaine Harris’s novel Living Dead In Dallas, there are many more characters and storylines than in the book.  The first major plot relates to Eric Northman, the vampire sheriff of Area 5 (which includes Bon Temps).  Eric requests that Sookie use her telepathic powers to try to locate his maker Godric who has gone missing and she leaves for Dallas with Bill and his progeny Jessica. 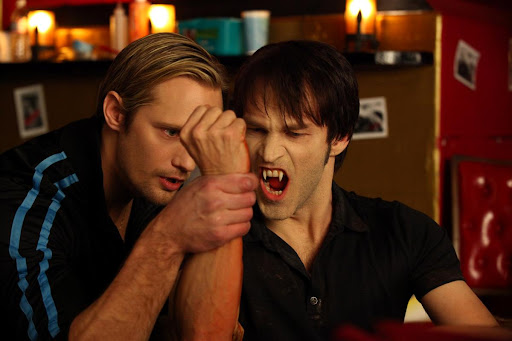 The second plot line revolves around the maenad Maryann who introduces more than a fair share of mayhem, lust and destruction to the small town of Bon Temps while Sookie and Bill are in Dallas.  Maenads were the female followers of Dionysus, the ancient Greek god of wine, and they were known for their ecstatic, frenzied behaviour.  While posing as a social worker, Maryann takes Sookie’s best friend Tara under her wing and they later move into Sookie’s home while she is away.  Maryann frequently holds debaucherous orgies to which the town folk are invited and the entire town is overcome by lust and lunacy at these parties. 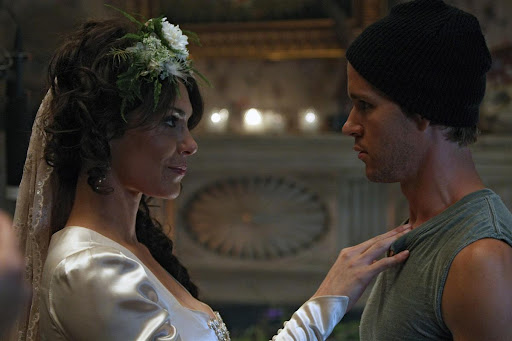 It is hard to believe that there were only twelve episodes in this season as so much happens and the tension and excitement literally reaches a fever pitch as the season hurtles towards its smashing finale.  I thoroughly enjoyed this season, even more so than the first season but some parts I loved more than others. 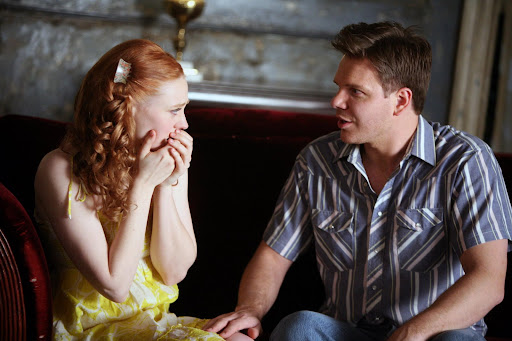 Hoyt is played by Jim Parrack and thankfully he has a much bigger role in the television series than he does in the books.  This season he meets Jessica Hamby, a young vampire who is the progeny of Bill.  Jessica’s character is exclusive to the television series as Bill was forced to “make” a vampire at the end of the last season as punishment for killing a much older fellow vampire while he was defending Sookie.  I really enjoyed the relationship between Hoyt and Jessica and this was no doubt assisted by the lovely Deborah Ann Woll who plays Jessica.  I really hope we see more of these two characters in the next season but I doubt they will stay together long. 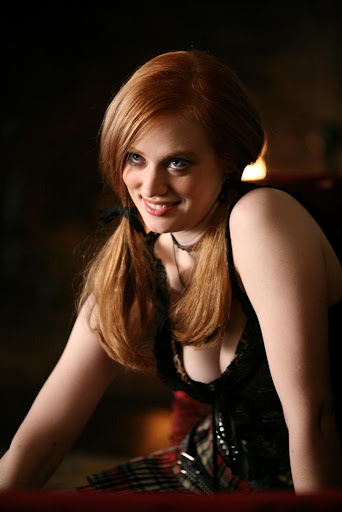 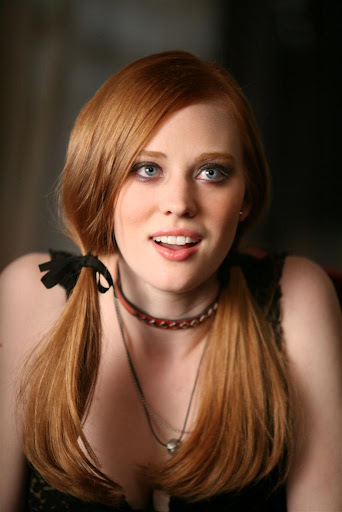 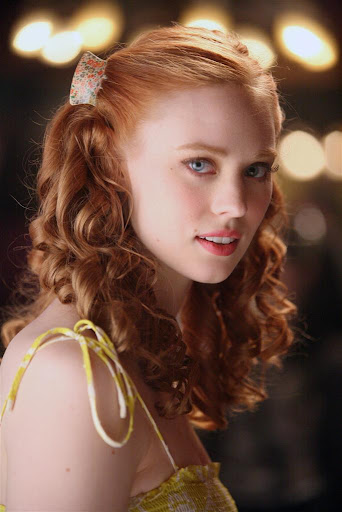 The story of Maryann represents a huge departure from the storyline in Living Dead In Dallas but it was done really well in the series.  I imagine that the storyline in the books might have been insufficient to carry the whole season as the books are told from Sookie’s perspective and so this plotline was probably introduced to add some spice and to keep the characters of Bon Temps fresh in the viewers’ minds.  Nevertheless, Maryann’s plotline carried the irreverence that True Blood is renowned for as she drums the town up into a crazy frenzy and her energy possesses them all.  The resultant drunkenness and loss of inhibition was really done well, as was the acting and visualization and it added a menacing yet entertaining twist to the season.

At first I couldn’t figure out what all the fuss about Eric and Pam was.  I still wouldn’t be able to explain it to you but these two are definitely amongst my favourite characters in the show.  Scenes with Eric in are infinitely more interesting than those involving Bill and I wish Sookie and Eric would just hurry up and get together.  Pam is a bouncer at Eric’s vampire club Fangtasia and she has the most awesome and morbid sense of dry, snarky humour.  Eric and Pam are played by the exquisite Alexander Skarsgård and Kristin Bauer and I do hope they get more screen time next season. 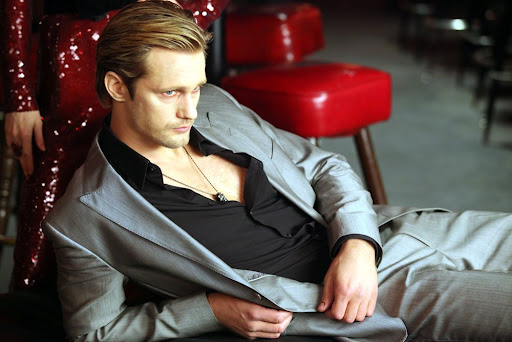 Sookie’s brother Jason might be the epitome of naiveté and fecklessness but Ryan Kwanten does a great job in this role and it was good to see more of him this season.  In yet another departure from the book, Jason joins the anti-vampire church Fellowship of the Sun and quickly moves up their ranks.  Sure, it’s kind of predictable what happens in the end but nicely done nonetheless. 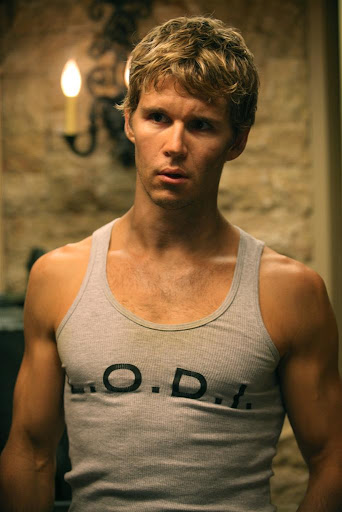 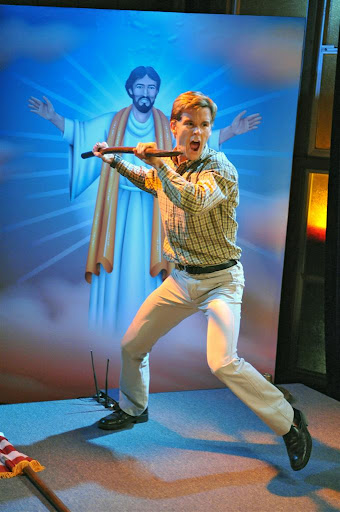 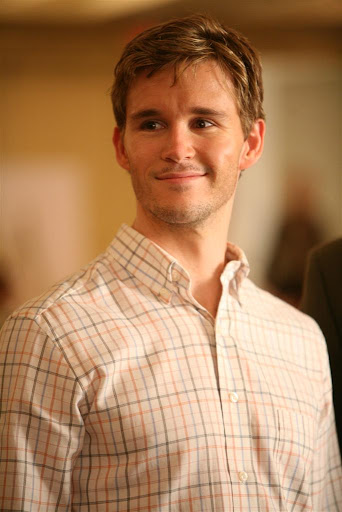 Sam is my favourite character in True Blood and I love that his role was also expanded this season.  I loved his relationship with Daphne and as always, it is great too see Sam Trammell in so little clothing.  Even though things don’t really end up so well for Sam this season, it was really touching to see him cry in the last episode. 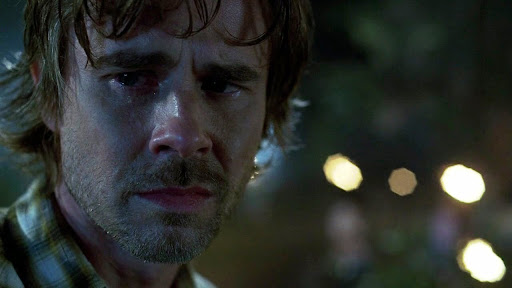 Lafayette is another one of my favourite characters and I was as pleased as punch to see that he had a role in this season.  I love everything about him from his sense of fashion to his dry sense of humour.  What I didn't really get was the necessity of having him incarcerated in a dungeon at the beginning of the season.  This storyline may have been necessary to introduce the vampire Queen of Louisiana, Sophie-Anne LeClerq, later in the season and it may also have demonstrated a certain facet of Eric’s personality.  In the end though, so much happens in this season and it seemed to all be over too quickly anyway that any significance or moral lesson was kind of lost during the rest of the season.  Nevertheless, Lafayette is played to perfection by Nelsan Ellis and he did a good job this season of capturing Lafayette’s post-traumatic state while still maintaining his camp style. 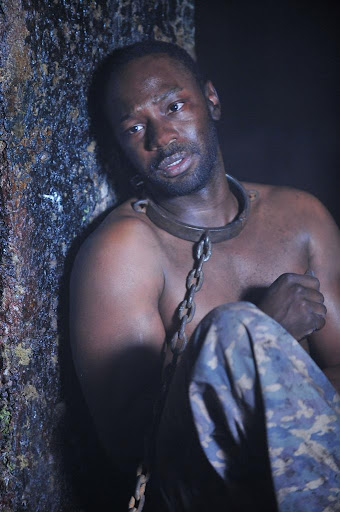 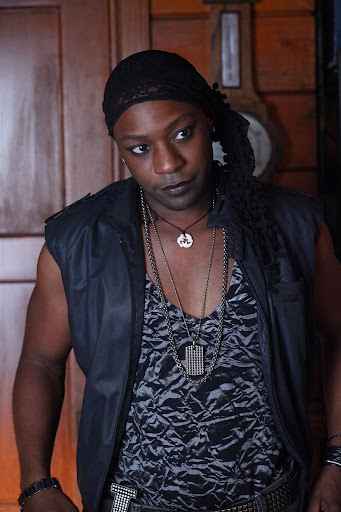 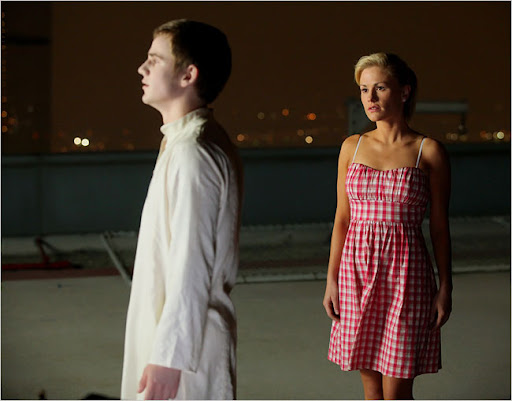 Godric was lovely and it is easy to see why so many fans of the series liked him so much.  Played by 20-year-old Dane Allan Hyde, Godric only appears in 4 episodes of the series and yet his storyline seems so much bigger.  Allan Hyde has an incredible screen presence and Godric is a mysterious and enigmatic character with his boyish looks and tattoos dating back to Roman times.  While I enjoyed every second that Godric was on screen, something about his portrayal in the series didn’t quite work for me.  Godric is portrayed as an enigmatic, enlightened individual and even if this hadn’t represented such a massive departure from his character in the book, it still wouldn’t have sat right with me.  Godric was meant to be so base and evil that he made Eric look like a cherub but in the absence of this evil nature, it was never properly explained in the series why he had aligned himself with the Fellowship of the Sun and why he felt the need to repent.

There is also some small sense where I wonder why they included him at all.  By introducing Jason to the Fellowship of the Sun, they didn’t really need him there at all in the end.  I have to stress that I am grateful that they did include him and his final scenes (which I shall not spoil) were really fabulous but his story as a whole wasn’t perfect.  In a similar way to Lafayette’s dungeon storyline, it seems that a pretty strong storyline was introduced but that they didn’t run with it all the way to the end.  It felt incomplete in some way and Hyde’s fantastic performance was left hanging.  Or perhaps I am simply disgruntled that we only saw Allan Hyde for four episodes?

The second season of True Blood is a visually stunning production replete with a great-looking cast, striking costumes and excellent cinematography and the show absolutely shines on the Blu-ray format. Presented in HD 1080p video, the visual quality of this Blu-ray is outstanding. In fact, this is the best example of the power of Blu-ray technology that I have seen so far and not only was the video sharp and crystal clear but colours were especially vivid too. This is the kind of experience which makes it almost impossible to return to standard definition television or DVD. Combined with the impressive 5.1 DTS-HD Master Audio track, the experience is one of immersion in the world of True Blood. There were times when I could almost feel the stifling humidity of sub-tropical Bon Temps and hear the cicadas and the complete audio-visual package certainly adds to this.

The other stand out benefit of Blu-ray technology is all of the exciting extras that they manage to jam onto the discs. Both the Blu-ray and DVD release features audio commentary on six of the episodes; the thirty minute mockumentary The Vampire Report and four Fellowship of the Sun mini-episodes featuring Steve and Sarah Newlin.  The Blu-ray release takes it up a notch though with an incredible interactive experience.  The Blu-ray includes a series index, episode previews and episode recaps which is becoming pretty standard on Blu-ray releases but is pretty cool nonetheless. 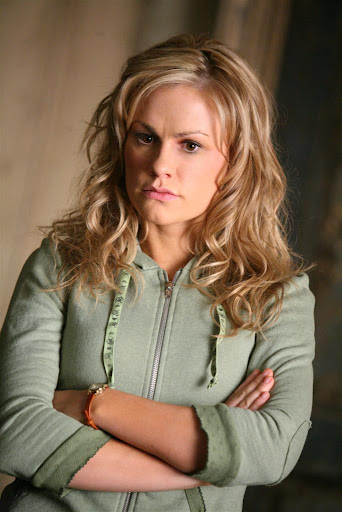 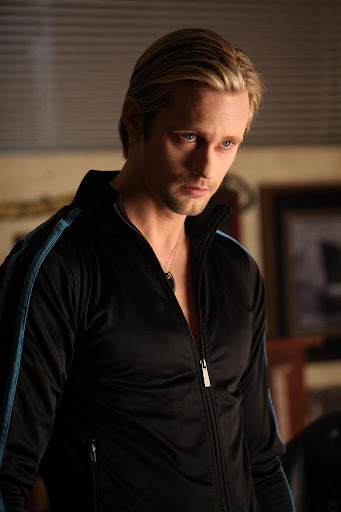 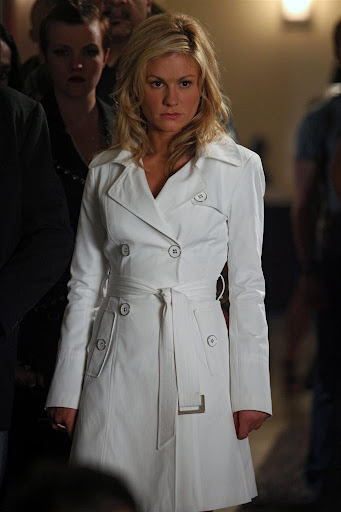 What really impressed me was the enhanced viewing with picture-in-picture character perspectives from Hoyt Fortenberry, Pam, Maryann’s servant Karl and Fellowship of the Sun pastor Steve Newlin.  Fans of Pam will especially love this feature as she speaks “candidly” and sarcastic, snarky comments are brilliant.  The Blu-ray also features a picture-in-picture flash back and flash forward facility as well as a pro- and anti-vampire vampire messaging feature that you could enable.  My favourite Blu-ray feature was the “Hints and FYIs” feature which told you little snippets about the characters and scenes and told you what to look out for.  I wouldn’t recommend that you enable it during your first viewing but it is a must for fans to get the maximum experience out of the season.

Article first published as Blu-ray Review: True Blood - The Complete Second Season on Blogcritics.  I was given a preview copy of the season to review and I think it goes without saying that the opinions expressed herein are my own.