Jonathan Sakas has been described as “Talking Heads meets Lady Gaga”; he is not too sure what that means but he’ll take it as a compliment.  While many artists are turning to electronic, synth-driven sounds reminiscent of new wave and synthpop, not all of them experience the success of bands like The Killers or Franz Ferdinand.  Far too often they land up sounding dated and tired and I was keen to find out whether Jonathan Sakas would stand out as an electronic rock artist.

Albatross is Jonathan’s debut album and it is the follow up to the 2009 EP Death of the Iceman.  After taking a quick listen to the EP, it is immediately clear that Albatross has a far more polished and bolder sound.  This is quite an accomplishment really as not only did Jonathan write the music and lyrics on the album, he also played all of the instruments, did all of the electronic programming and produced the album too. 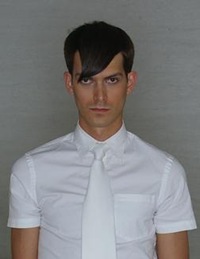 Albatross begins with the pleasing “Striker” which is solid, upbeat pop number.  The song has lively electric guitars that are the trademark of indie rock and is sure to be a crowd pleaser.  “Driver” is more downbeat and it is the first taste of something new yet unmistakeably familiar.  It is a flawless song that puts me in mind of the sweeping soundscapes of mid-eighties synthpop.  For a limited period of time, “Driver” is available free to download from Jonathan’s website.

By the time the third song “Porridge” rolls around, you start to feel quite comfortable with the album.  This is another upbeat song that reminds me of Depeche Mode, Orchestral Manoeuvres in the Dark and a-ha but not in a stale or outmoded way.  That feeling of comforts fades however as “Hindu” packs a bit of a surprise.  It is an edgy song that definitely steers the album away from the realm of popular music and into the alternative music arena.  Suddenly, there are parts of the album that are closer to Nine Inch Nails or bands like The Mission or Love and Rockets than bands from more popular genres.  “Hindu” is too dark and slow to be a hit but it is definitely one of my favorite songs on the album.  Jonathan’s strong vocals really begin to stand out on this track too and he sounds not unlike Dave Gahan.

Jonathan Sakas starts to channel Visage and Human League with “Fall”, the fifth song on the album.  “Fall” has sweeping, driving synthesisers and a great electronic sound.  My only complaint about this track is that it is too short as sometimes you just wish a song would go on for a little longer.  The next track “Oysters” is another firm favorite of mine with a dark and dramatic introduction on organ and emotional lyrics about the end of a relationship.  “Marie” is set to be one of the most popular songs on the album and was released on the Zia Records compilation You Heard Us Back When, Volume 4 which features some of the best local bands from Arizona and Navada.  It is a lively song but once again, I prefer the slower, more downbeat sounds of the next track “Lion”.

The penultimate song “Grapes” confirms the success of the album as an outstanding example of electronic rock with a definite nod to influencing artists.  The final song “Stay” deserves special mention though.  It is a masterpiece of a song with deep and haunting beats and more than a healthy dose of anger and resentment.  It is definitely on a par with Trent Reznor’s most warped songs and has one of the boldest lines I’ve heard in years.  It kind of makes me want to ask the artist if he really said “I should have killed you when I had the chance”.

Albatross is not in any way dated or average.  It is a powerful debut and an album that is sure to occupy a premium position in my playlist over the next year.  I would certainly be interested in hearing more from Jonathan Sakas and am pleased to hear that he is currently working on his follow up album.  You can find out more about Jonathan on his MySpace and Facebook pages.

This is an excellent debut and I give Albatross 4.5 stars.

Article first published as Music Review: Jonathan Sakas – Albatross on BlogCritics.org.  Jonathan sent me a copy of the CD to review and all opinions expressed in this review are genuinely my own.