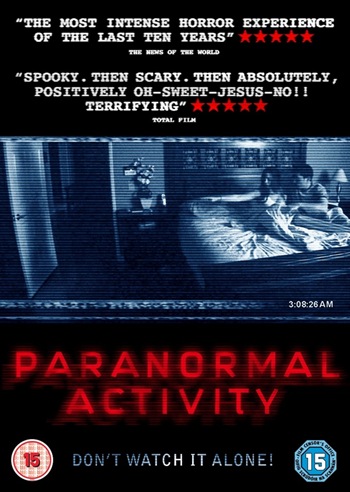 Paranormal Activity has been billed as the most terrifying film of the decade and it comes with a strict warning: Don’t Watch It Alone! But seriously, how frightening can it be?

Micah (Micah Sloat) and Katie (Katie Featherston) are a young, middle class couple that have moved into their first starter home.  They have been repeatedly disturbed by a strange phenomenon that is most active in the middle of the night when they are sleeping.  A day-trader by profession, Micah is a lover of all things technological and electronic; so determined to shed some light on the paranormal activity, he buys a high definition video camera and sets it up at the foot of their bed.

Paranormal Activity was filmed with a handheld camera over one week in first-time director Oren Peli’s San Diego home at a cost of just $15,000.  It is based on the same premise as the 1999 film The Blair Witch Project and the audience is led to believe that these are real events that have been pieced together from Micah’s film archives.  The handheld camera adds to the realism of the film and scenes are filmed throughout the house with the majority of the filming taking place in the couple’s bedroom.

There is no doubt that something is going on in the house.  You never actually see the entity but doors open and close, bumps and noises occur throughout the house and Katie has several sleep-walking experiences.  This is not your average horror-slasher film but instead, the suspense builds up throughout the film as Katie and Micah become more frantic and traumatized.

Truth be told I enjoyed this film far more than I expected to.  At about 90 minutes long, it is just the right length and keeps the suspense going until things speed up towards the end.  I was surprised to see that this was the feature debut for both Micah Sloat and Katie Featherston as their performances were really good.  In fact, Katie Featherston won the Best Actress award at the 2007 Screamfest. 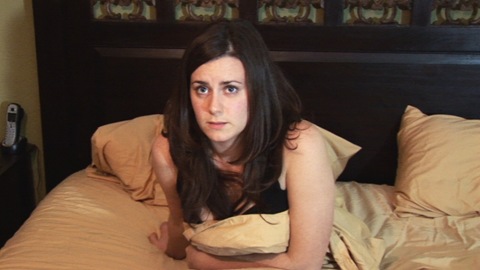 What then of the warning not to watch the film alone? Well, the thing is, had I watched the film alone then I might have been spared the embarrassment of having my entire family see me screaming three times in quick succession at the end of the film.  The ending is pretty good and quite a surprise so I found myself screaming for the first time in years!

The region 2 release has an audio commentary with Oren Peli and the original ending to the film too.  I really prefer the way the film ended in the theatrical release and I am glad that they changed the ending after initial screenings.  The best of the special features is the “Film Your Own Paranormal Activity” short film winners.  At the end of the UK screenings of the film, viewers were encouraged to shoot their own paranormal short films.  You can view all of the 3 minute entries at Icon’s ‘Prepare To Be Scared’ YouTube channel but the UK DVD and Blu-Ray release features the ten finalists in the competition.

Would I recommend Paranormal Activity?  Definitely.  It is short, thrilling and scary, just like a good horror should be.  Whereas Blair Witch Project was underwhelming after all the hype, Paranormal Activity actually is that scary and certainly worth a viewing.