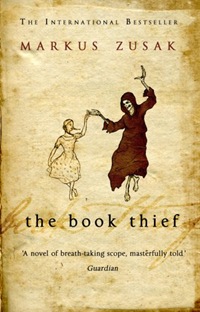 Every now and again, a book comes along that is so powerful and moving that you feel changed after reading it.  The Book Thief by Markus Zusak is just one of those books.  The Book Thief was published back in 2005 but for some reason it had not made its way onto my reading list until recently.  Don’t make the mistake of overlooking this important and brilliant book and rush out and read it immediately!

The Book Thief is set in the fictional town of Molching outside of Munich in Nazi Germany.  The story is narrated by Death and the book thief is a small girl named Liesel Meminger.  Death first meets Liesel when her younger brother Werner dies during a train journey while the children and their mother are en route to Molching.  The children were both intended to be taken into foster care by the Hubermann family and Liesel is taken in alone.  It later emerges that Liesel’s mother was most probably sent to Dachau Concentration Camp for being a Communist.

It is during her brother’s burial that Liesel steals her first book The Gravedigger’s Handbook.  The theft of the book seems to assuage her grief but it is only later that Liesel learns of the liberation and power of reading and literature.

Liesel’s new foster mother Rosa Hubermann is described as a hard and abrasive woman who resembles a wardrobe while Hans Hubermann is seen as a caring and attentive man who Liesel readily begins to call “papa”.  She makes friends with the next door neighbour Rudy Steiner and begins to attend a nearby school.  For some time the only troubles she has are nightmares about her brother’s death, a shortage of food due to rations and her papa’s lack of work and a fair share of trouble at school.

That all changes when a string of events leads to the Hubermanns hiding the Jewish Max Vandenberg in the basement of their house.  Another pivotal moment is when Liesel steals her second book during a book burning and subsequently begins a relationship with the mayor’s wife and her book collection.

There is a sense of dread that pervades through the whole story and one is continually left with the fear that something awful is going to happen.  Will Liesel’s love of books cast doubt and suspicion on the family? Will the children be caught for thieving? Will the Jew in the basement be discovered?  In the end, that sense of dread becomes a metaphor for the war itself and Death himself begins to feel disgust at the amount of souls he took away during that time.

The book was marketed as an adults book when it was originally released in Australia but was later released as a young adult book in the United States.  In all honesty, the book transcends such boundaries and has strong lessons to teach no matter the age of the reader.  Themes of friendship, loyalty, convictions and morality are central to the story here as is the power of literature and the power of taking what is rightfully yours.  Freedom in this book does not come without suffering or loss but it is something that is hard won and which is breaks beyond the walls of a concentration camp when it occurs.

This is a fantastically written book which has been nominated for and won scores of awards right around the globe.  Markus Zusak’s writing appeals to all the senses as he describes colours, tastes, sounds, textures and even smells.  Indeed, Death describes all of the scenes of death and dying in terms of hues and the colour of the sky.  The result is that the story becomes all the more vivid and the effect is that this story feels like an epic as opposed to four years of the life of a child during Nazi Germany.

I would recommend this book to absolutely everyone.  It is a real master of a book and I have absolutely no hesitation in giving it five out of five stars.