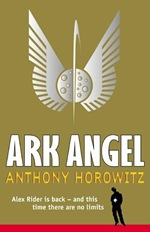 Ark Angel is the tenth Anthony Horowitz book I have read in 18 months so I guess it is safe to say that in that time I have become a massive Horowitz fan!  Horowitz is best known in the adult world for being the award winning television screenwriter of shows such as Foyle’s War and more recently Collision but it is his two young adult series that have garnered him the most fame and recognition.

Horowitz is the author of The Alex Rider series as well as The Power of Five series about five teenagers who must fight together to save the world from an ancient evil.  What makes Horowitz’s books appealing to people beyond the young adult demographic is the action-packed, break-neck pace of his books, the wildly adventurous storylines, the exotic locations and the strong characters of the protagonists.

Alex Rider is a fourteen-year-old boy carelessly used as a spy by first MI6 and later the CIA.  He is the perfect candidate for such a role as he was unwittingly trained in survival and espionage by his spy uncle from a very young age.  Horowitz has stated that the series must end by Alex’s fifteenth birthday and the eighth book was released in November 2009.

Ark Angel is the sixth book in the Alex Rider series.  It is by far the most explosive and exciting book so far and this is compounded by Horowitz’s disclaimer at the end of the book that all of the stunts in the book were written to occur within the realm of possibly but they are not to be tried at home!

It is hard to give a synopsis of the book without giving spoilers for the previous book Scorpia and indeed for this book as well and I certainly try not to give spoilers in my reviews.  However, I’d advise that you not read further if you haven’t yet read Scorpia.

Following the events at the end of Scorpia, Alex is recovering from a serious assassination attempt on his life in a private clinic.  He becomes embroiled in an attempt to kidnap fellow patient Paul Drevin and manages to take the other boys place.  What follows is one of the most exciting escape scenes out of any action film or book I have encountered before and Alex is then invited to join Paul on holiday by his thankful father Nikolei Drevin.  The CIA don’t trust Drevin though and so it is that Alex is once again dragged into the world of espionage and subterfuge.

Seriously, if you emerged from the world of teenaged wizards and thought “what next?”, forget effervescent vampires and head straight for the Horowitz books.