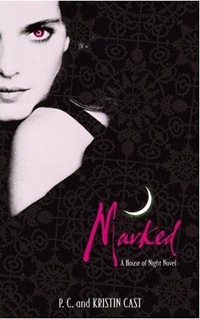 I’m surprised that I keep going for vampire books as it is not my favourite genre.  But there I was standing in a bookstore the weekend after we moved house and I walked out with Dead Until Dark by Charlaine Harris and this book, Marked by P.C. ad Kristin Cast.  I know why I chose Dead Until Dark as I am just loving the HBO series True Blood.

My reason for choosing Marked was absolutely noble though: I liked the cover and it was in the teenager’s section.  After the drama of moving house, I just felt  that I needed some easy reading.

I read the first couple of pages and then put it down in favour of Dead Until Dark which of course, I couldn’t put down until the very last page.  I then started again, not really expecting much after the brilliant coolness that is the Sookie Stackhouse series.

In the world of the House of Night series, vampires have always existed and it is adolescent hormones that triggers the reaction in certain teenagers that leads to them becoming fully fledged vampires.  (I reckon that happened to me actually as I was a fully fledged coffin kid from the age of about 15 until I was about 21).  The book starts with the protagonist Zoey being “Marked” as a fledgling vampyre and having to move off to the mysterious Vampyre Finishing School known as the House of Night.

I loved this book.  I absolutely enjoyed every single page (after we managed to escape Zoey’s mid-western high school) and this was one of the most thrilling books I have read since, well, the book I  read before it.  The best way I could describe this novel would be to say that it is a cross between the film The Craft* and the Harry Potter series.  There are really strong Native American and pagan  religious and spiritual components in the story and elements of witchcraft which may offend some people but I found them to be fascinating and exciting.

A lot of people don’t like the book and it is definitely a case of you’ll love it or you’ll hate it.  Many reviewers have claimed that the book is too preachy and that the authors are trying to work their agenda to hard.  I didn’t really see that at all.  If anything, I remembered being fifteen and dividing my world up in black and white terms into losers, nerds, sluts and friends.  I was super opinionated and I thought that was accurately reflected in this book.  Just because the protagonist in a book has a certain point of view or opinion doesn’t mean it is right and doesn’t mean that the author thinks it is right either!

Anyway, there is no point going on about it.  The sequels to both Dead Until Dark and Marked arrived from Amazon today and I can’t wait to start them.  I’m reading The Host by Stephenie Meyer and enjoying it far more than I thought I would!  How lucky is that, to really enjoy three books in a row?  Then again, it is Stephenie Meyer and could turn into a pile of crap by the end of the book…

For thoroughly thrilling and entertaining me and making me order the sequel from Amazon the very minute I finished it, I give Marked five out of five stars.

* The Craft was a 1996 film about a group of four teenage witches and it was one of my favourite films of all time. It had a fantastic Graeme Revell soundtrack and featured a cover of the Smiths classic "How Soon Is Now".  The song went on to become the theme song for the television series Charmed which was based on The Craft.