It is the live television event that has the Internet in uproar and is causing websites to crash: Dannii Minogue’s seemingly homophobic comment to X Factor contestant Danyl Johnson. 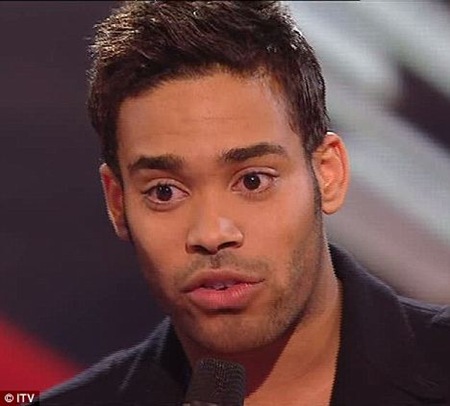 Danyl is flabbergasted on hearing Dannii's remark
You can see his performance here and at the end of the clip, Dannii says to Danyl: “…but if we’re to believe everything we read in the paper, maybe you didn’t need to change the gender reference in it”.  She is referring to the fact that Danyl had confessed in a News of the World interview to being bisexual and the fact that he had sang a “girl’s song” and changed the gender references.
I have to say that I have been a fan of Dannii Minogue for several years now and I loved her on X Factor but her comments were completely inappropriate and irrelevant.  I actually felt sick to my stomach for minutes after hearing what she said as the magnitude of her comment sank in.
One commenter on the ITV site sums it up perfectly:


“icanseethesea 10/10/2009 23:15:15
I am not a website-posting kind of viewer, but feel compelled to do so. To watch a grown adult forced to mutter the words 'I'm not ashamed' was vile. Dannii Minogue may not have intended to cause hurt (as a gay woman myself, I actually believe her intentions were good) but if you can't articulate yourself professionally then you shouldn't be allowed on TV.”


Yes, Minogue is a gay icon who frequents gay clubs; yes, he had outed himself in the press already but she blindsided him and should have commented on his performance not his sexuality.
ITV took a full hour to upload Danyl’s video and at the time of posting this, there were 70 pages of complaints about Dannii in the comments section.  OFCOM is probably having the busiest night they’ve had since the Anton van Beke scandal last week!
All in all, it was a night where the judge’s performance far outshone those of the contestants and I imagine we can see fireworks for the week to come.  Read more about the night’s antics here.

EDIT: Dannii Minogue has issued an official statement at her blog:


"Dannii made a joke about the lyrics of Danyl's song, referencing a recent newspaper interview he has given about his private life. She spoke to Danyl straight after the show, explained what she was talking about and he wasn't offended in the slightest. Dannii is mortified if her comments have been misinterpreted as she has always been hugely supportive of the gay and bi-sexual community for her entire career." - source