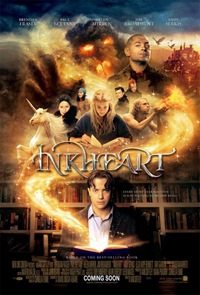 Inkheart is one of several films that prompted me to eventually go out and get a Cineworld Unlimited card.  I had wanted to see this film from the minute I first saw the poster and I was weary of constantly missing out on seeing films in the cinema.  I know it sounds dramatic but with both of us being film lovers, it simply made sense to make the effort to get out of the house and go to the cinema more often.

Inkheart was already off circuit by the time we started going to cinema more regularly again but I eventually got to see it on the plane on the way back from New York.  So what of the film then?

This is a colourful, magical and exciting story with lively and energetic characters.  I believe that it is not at all faithful to the original book so fans of Cornelia Funke’s Inkheart might be disappointed.  It is in the league of Spiderwick Chronicles and Stardust and it is the type of film that will make children believe in fantasy, magic and the power of books and reading.

Mortimer Folchart has the gift of bringing characters to life whilst reading aloud from books.  The problem is that he can’t control them once they emerge to wreak havoc in our realm and sometimes someone from the real world is taken to replace those characters in the fictional worlds.  Like his wife. And now these shady characters have caught up with him and want to use him to bring about their less than honourable plans.

It was an entertaining 106 minutes with some charming performances from Paul Bettany, Jim Broadbent and Helen Mirren.

My favourite character was Andy Serkis’s Capricorn but then I always like the misguided villains, don’t I? I have also been a fan of Mr Serkis for quite a while.  You can click on the image below for a Inkheart screensaver of Andy as Capricorn. 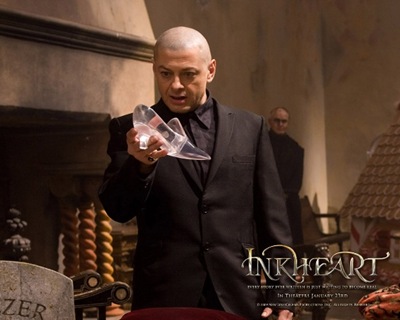 This is an enjoyable film but not as full of sheer wonder and brilliance as, for example, Stardust was.  I think I have to agree that they overdid the special effects and comedy without letting the story speak for itself.  This is a story about the power of words and ideas, after all.

For helping me pass the time on my transatlantic flight in an enjoyable and exciting manner, I give the film four out of five stars.