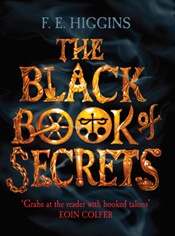 The Black Book of Secrets is a fantastic little book that I picked up at the library the other day.  It is aimed at the 9 to 12 year old age group but I think children up to age 15 would enjoy it and I certainly did.

The book has a definite Dickensian flair to it and begins in the gritty slums of the City before the story moves to a little village in the mountains.  Higgins describes the poverty, filth and grime of the urban Victorian era so well that you can almost smell, taste and feel it.  The book reminds me of some of my favourite tales including Oliver Twist, Sherlock Holmes and even the factual Jack the Ripper legend.

In The Black Book of Secrets, Ludlow Fitch suffers a great betrayal at the hands of his parents and flees the stinking city in the back of a land owner’s carriage.  He arrives in the village and becomes an apprentice for Joe Zabbidou, a Secret Pawnbroker.  I’m not giving any more of the story away as I wouldn’t want to spoil the twists and surprises but suffice to say, one of my favourite parts of the book is all the smaller storylines that run through it and all the deep, dark secrets of the past that come to haunt the characters.  There is clearly magic at work in this book but the storyline does not depend on it, which I found appealing.  I also liked the fact that this was a stand alone book as so many authors seem to be writing series these days and it makes a nice change.

The ending of the book was a little too neat and while the story was expertly woven, the characters were slightly flat. Nevertheless, I really enjoyed reading this book and give it four out of five stars.