It is official: I have read enough Richelle Mead books now to both classify myself as a fan and to warrant an “Author: Richelle Mead” label on this blog. I really do enjoy her Georgina Kincaid / Succubus series and I have recently finished Vampire Academy. 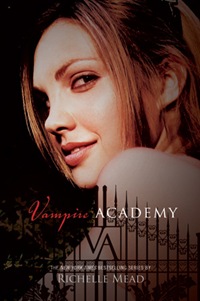 Vampire Academy is the first book in the Vampire Academy series and if you click on that link or the picture it will take you to the official Penguin website. In keeping with my generally good impression of Richelle Mead, her relative accessibility to her fans and her generally healthy and positive attitude, I am impressed to note that the official site has a section displaying fan videos. I really like that she sees fan-fic and fan interpretations as flattering as opposed to seeing them as theft or taking offence to them. It seems that she is a confident author who is able to withstand the pressures of fame and fan-worship and doesn’t constantly feel that her fans are taking a piece of her every time they move into her world.
Richelle Mead also has her own website and you can find the Vampire Academy page here.

It took me a long time to get into Vampire Academy and that was exacerbated by being so busy over the past couple of months, what with my visit to New York and trying to get back into the swing of life afterwards. Last week I decided to give it another proper try and so I started the book from the beginning again.
I noticed that the characters slowly began to grow on me and I found myself sitting at work wishing I could take some time to curl up and read some more. I became emerged in the world of Vampire Academy and wanted to spend more time in it. This might be yet another teenage vampire novel but it is light years away from the Twilight series on so many levels.
I remember thinking at some point in the beginning of Twilight that Bella seemed to be quite self-aware and confident; unfortunately, the relationship with Edward seemed to make her unravel into a neurotic, insecure and self-effacing shadow of a girl, sending the women’s liberation cause back fifty years or so.
The protagonist of Vampire Academy, Rose Hathaway, is not perfect but she is a strong and confident young woman, perhaps impossibly so for a sixteen-year-old teenager. If I were recommending a book for a teenager to read, I would sooner recommend Vampire Academy over Twilight. Rose is not perfect and she doesn’t always make the best decisions but she does deal with the consequences of her actions and she is able to walk away from a relationship with a boy without destroying herself or defining herself in terms of his affection towards her.
I feel that Richelle Mead has woven an interesting story and for once, I actually like her take on the whole vampire myth. (I’m not the biggest fan of vampire stories as it is because I find blood makes me faint and doesn’t really seem all that attractive or sexy to me). I will definitely read the other books in this series and I believe that the books will get better as she gets into the series, much in the way that the Succubus series improved book after book. I believe that there is a massive shake-up at the end of the third book though so I am going to wait until the fourth book becomes available later this month before reading any further.
Like Mead’s other books, this one isn’t a high end literary achievement but it is an entertaining read with some very likeable characters. I’ll give it 3.5 stars but I do expect the rest of the series to be an improvement.